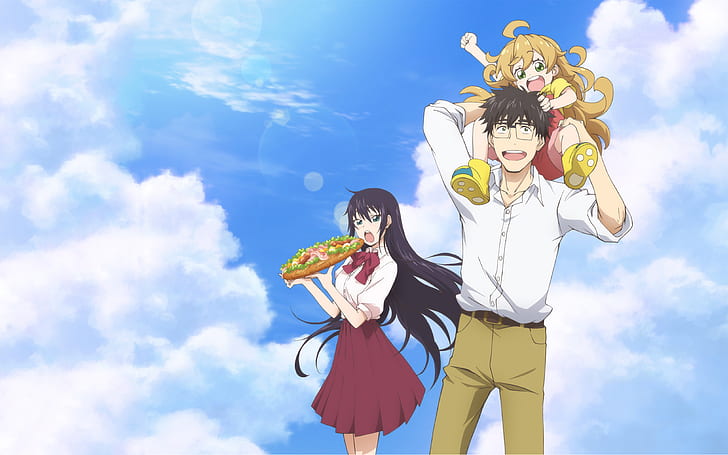 Amaama to Inazuma is a slice-of-life, gourmet comedy anime series it premiered on July 5, 2016, written by Mitsutaka Hirota and directed by Tarou Iwasaki. The series is basically about a single father who lost his wife when his daughter was still young and he had to do his best to provide a good meal for his only daughter. This is a wholesome anime mostly covering the loving relationship between the daughter and father and how the father develops his culinary skill. According to my anime list, 286K users have rated the series 7.35 most users find this anime very healing and loving. It shows how the single father raises his daughter on his own while dealing with the grief of losing his wife. Most slice-of-life anime is lovely we don’t think anyone would not enjoy them but you also have to be selective about what you want to watch. A heartwarming and charming journey of a sweet little daughter and single father who make dishes for his daughter well what could be more lovely than that. There are many gourmet anime but the theme varies from each other if you are interested in this father-daughter duo and of course cooking then you can just dive into it without a second thought.

Many fans loved the series for its wholesome story and appetizing food however season 1 had only 12 episodes. Everyone was looking forward to seeing more of the father-daughter duo when the series was released on July 5, 2016, the manga on which the series is based was not completed so fans were expecting the creators to bring season 2 once the manga gets completed. The manga finally got completed on December 7, 2018, it’s been 4 years since then but there is no news of season 2 so far yet. It has been confirmed that the makers have decided to cancel the series for unknown reasons so we won’t be getting Amaama to Inazuma any time in future.

MUST READ: What Episode Does Ace Die? One Piece Episode Explained!

The series explores the story of a workaholic single father who raises his young daughter all by himself after his wife passed away. Inuzuka Kouhei feeds his daughter packed food every day because of his busy schedule and also because he has to do a lot of other things for his daughter. When they go for a picnic they find a girl named Iida Kotori eating some riceballs and crying near a cherry blossom tree she catches Inuzuka Tsumugi’s attention. After talking with her they find out that she was supposed to come here on a picnic with her mother who did not show up and she shares the rice balls with Tsumugi after eating packed food for so long she finally tastes something different and loves it. Iida Kotori gives a card to Kouhei and asks them to visit her mother’s restaurant, Kouhei notices that Tsumugi wants to try homemade food after seeing her leftover food inside the packed lunch.

He then takes Tsumugi to the restaurant where Kotori gave her a card when they reach the restaurant they learn that Kotori’s mother is not at the restaurant. Kotori decides to cook dinner for the father and daughter as Kouhei misses his wife and recalls the memories of his late wife and how she used to cook for the family. After noticing the happiness of his daughter enjoying homemade food he tells her that from now on he will cook for her but right then Kotori offers him to cook dinner with her and eat together.

Where To Watch Amaama To Inazuma Season 2 Online?

The series has been cancelled so it won’t be returning with season 2, Amaama to Inazuma season 1 is streaming on Crunchyroll.