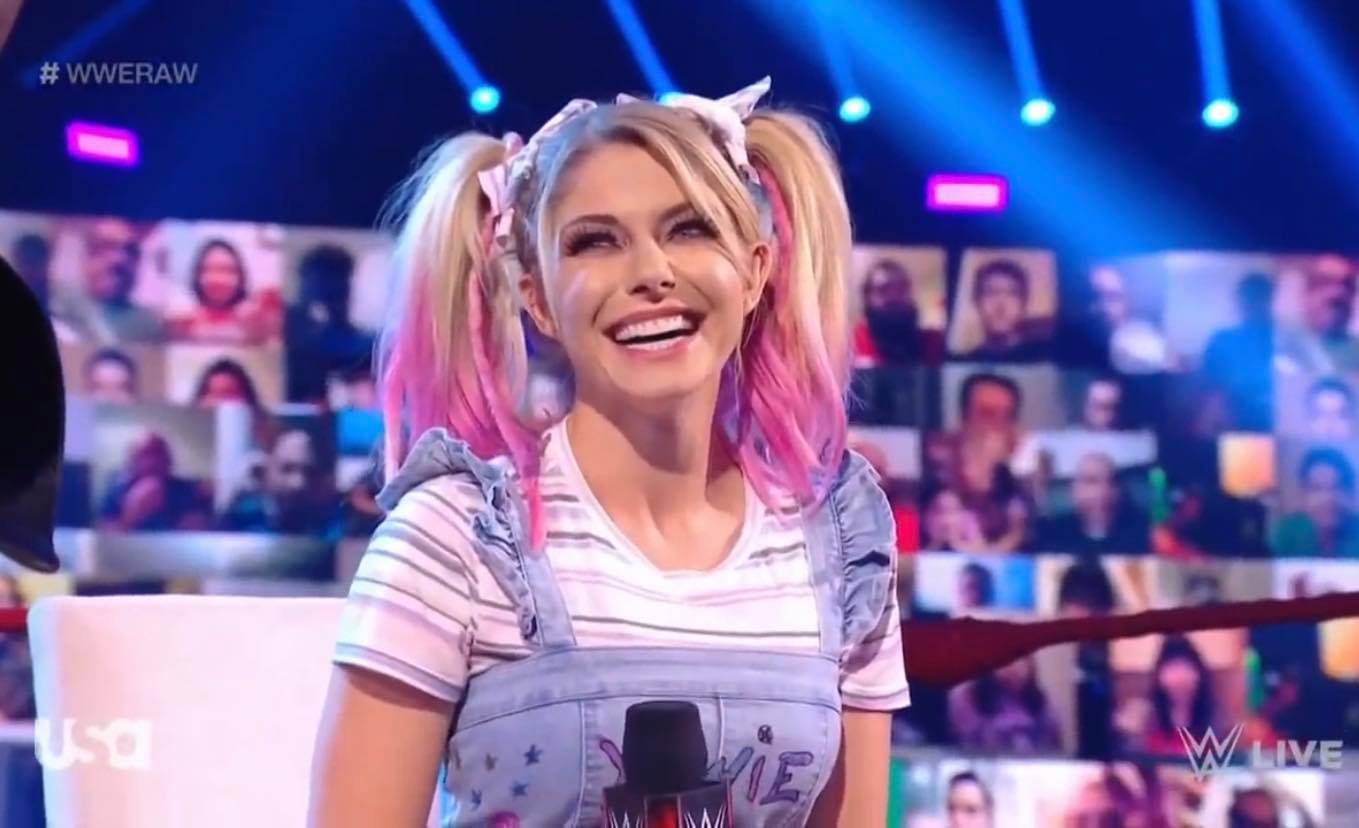 Alexa Bliss is well known for sharing chemistry with many of her WWE friends, like Ember Moon, Braun Strowman, Carmella, Nia Jax, Nikki Cross, Mickie James, etc. Alexa has been known in the WWE world as a talented fighter, who is really good at keeping away from controversies. She has a sweet and welcoming personality which is quite friendly. Hence, there’s no doubt that the star is the best choice for a dependable and honest friend. She often spends quality time with her friends and everyone (mostly her fellow RAW mates) has shown constant support and respect, cheering her on in her matches. The above-mentioned names are only but a few names from her friends list and the champion has many more companions who love her company. Amongst them, Nia Jax, Alexa’s fellow WWE RAW star, has been known to be her best friend. This article will provide you with all the basic information we have on the stars and their friendship. If you are a fan, stay till the end to know more interesting facts about your idols.

Alexa Bliss and Nia Jax are as close as they can be and aren’t shy about stating their friendship stories and events. The two have constantly been rivals during their matches and have always respected each other both on and off the ring. Alexa revealed that she considers Nia as her best friend and a person she cannot do without. The show, Total Divas, featured their friendship as they were seen together in a pig farm. Alexa has always loved pigs and recently her pet pig left the world. The duo’s friendship started back from the day when Nia was appearing for her WWE tryouts. Nia, being too nervous, appeared at the venue way too early and was locked out. Alexa, who happened to be helping at the event, let the silly soul in. They both started talking and that was the starting point of their friendship. During one of her matches with Ronda Rousey, Bliss was brutally injured and the match kept going on as the players weren’t ready to give up.

Nia stood up for her and approached the creative team to make relevant changes to protect her friend. “I was so angry. I was like, No! she cannot do this anymore. I would personally not allow her to get back in the ring to get hurt again. I had to go to the people, the higher ups, and I had to put down a stern foot and say, ‘Listen, Lexi is five-foot-nothing 100lbs, getting thrown around like a little rag doll and getting injured’ “, she said while she was talking about the incident in 2020. Nia defeated Bliss for her title in WWE, which also happened to be her first title on the show. “To see Nia holding the title up and knowing that my best friend is having her Wrestle Mania moment and I was able to share that with her was awesome. We did the best job at our abilities to make the payoff, and show that bullies never win and the good guy will prevail, because of the story we had told leading up to it”, she said regarding Nia’s win.

There was an incident when Alexa was caught talking badly about Nia, when she was backstage waiting for an interview and the cameras happened to record the whole conversation, where she also admitted to faking her friendship with Nia. Nia wasn’t happy about the incident and the reason for the incident stands a mystery. Nevertheless, during the lockdown, the duo has been seen together on multiple occasions, hanging out and releasing pictures, which shows that the duo is still on good terms with each other and we are soon to see them back together in action. The event clearly didn’t do much to ruin their chemistry and, as the contestants are always on, regarding the fun, drama and their over-the-top jokes, it is expected that Alexa wasn’t 100% honest at that time.

The real name of Nia Jax is Savelina Fanene. She was born on 29th May 1984, in Sydney, Australia. She is a Gemini and the daughter of Joseph and Renate Fanene. She is 6 feet or 183 cm in height and weighs around 272 lbs or 123kg. Nia belongs to a mix of Samoan and German ancestry. She has a net worth of 5 million USD as of 2022 and earns $100, 000 from wrestling. She is also known as the Irresistible Force in WWE. She is 38 years old as of 2022, and is currently unmarried. Nia is also a model by profession and earns from PpV appearances and merchandise royalties. She was named rookie of the year in 2016. She also ranked 8th among the Top-50 female singles in the PWI Female 100 in 2018 and 30 out of the Top-150 female wrestlers in 2021. She ranked 24 amongst the Top-50 Tag contestants in PWI Tag Team 50 in 2021. She is the winner of the WWE RAW Women’s title and two-time holder of the WWE Women’s Tag Team Championship.

She was in a relationship with Josh Woods in 2004, although they broke up in 2016. She has been reported as single ever since. She is a basketball player and even managed to get a scholarship, thanks to the sport. She made her debut in 2015 by the name Zada but later changed it to her current stage name. She has over 1.7M followers on Instagram and is always active on her social media sites. One can always see the energetic Nia by referring to her Instagram account, where she keeps posting her small memories. Nia is also Dwayne Johnson’s cousin and they belong to the same clan, with multiple wrestlers. Joseph, Nia’s dad, is the first cousin of Johnson’s grandfather, Peter Maivia. Apart from this information, she has kept her personal information secretive and we will update the information as soon as we receive any confirmed information.

ALSO READ: 22 Funniest Episodes Of Family Guy That Will Make You Laugh!

Alexa Bliss was born on 9th August, 1991, and is currently 30 years old as of 2022. She is a Christian and is married to Ryan Cabrera, a singer-songwriter, after her engagement with former WWE star Buddy Murphy broke off. They got married in Palm Desert, California, on 9th April, 2022. Alexa has a net worth of 2.3 million, earning around $300,000 as her annual salary. Alexa’s real name is Alexis Kaufman, and she was born to teenage parents, Bob and Angela Kaufman. Alexa is 155 cm tall or 5 feet 1 inch, and has an approximate weight of 46 kg or 102 lbs. She is Leo, born in Columbus, Ohio. Throughout her life, Alexa has won many achievements and awards. She was the first woman to hold the RAW and Women’s SmackDown championships

. She ranked 2nd out of 100 female wrestlers in the PWI Women’s 100 in the year 2018, and also ranked 6th in the top 10 female singles wrestlers. She is the 3-time winner of the WWE Women’s RAW Championship, and won the WWE SmackDown Title twice. She also won the WWE Women’s Tag Team Championship two times along with Nikki Cross, and is the second winner of the Women’s Triple Crown Championship. She is also known as ‘The Godess’. Alexa also acts as a TV actress and has added quite a lot of money to her net worth, thanks to her successful career. She has a history of taking part in track competitions, kickboxing, softball and gymnastics, which shows her interest in sports, since her childhood days. She is a big fan of Disney, like all the average girls, and takes a lot of fun and pride in cosplaying her favorite characters. She has also made a lot of references to the characters for her ring outfits, which in turn are stunning.

Alexa is reported to have studied at Ohio State University and The University of Akron. She debuted on 20th September 2013, and has been on a roll ever since. She has a perfect body measurement of 30-26-31 (in inches), has captivating blue eyes and blonde hair. Alexa Bliss has over 5.9 M followers and above 1.88 k subscribers, which proves her popularity is no joke. She has always had injuries during her fights, and she has taken a long break since October 2018.

ALSO READ: Best Seasons Of Simpsons That Has A Different Fan Following!