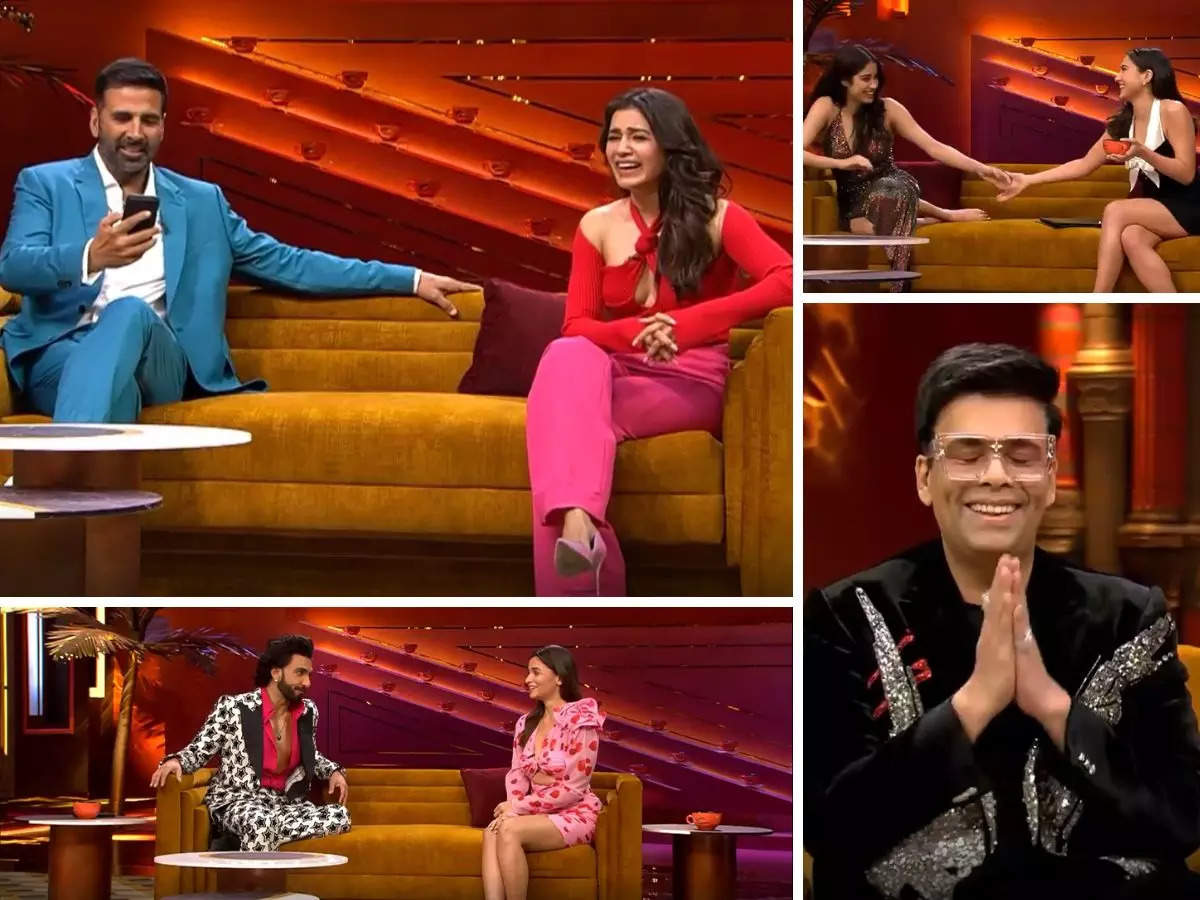 The most popular Indian talk show Koffee With Karan is back after almost two years and fans cannot control their excitement for this one. Koffee With Karan is a talk show where a pair or a group of Bollywood celebrities come together and chat with Karan about their career, relationships, and other Bollywood gossip. The most famous part of the show is the rapid-fire round with Karan asking the celebrities some weird questions about them and whoever gives the best answer wins the hamper. The show has completed six seasons and currently, two episodes of the seventh season have been released.

After the trailer for season 7, it is everywhere on social media. The season has some amazing and very rare pairings. Also, a lot of famous South Indian actors are entering the show with popular Bollywood actors which is the most interesting thing about this season. While the last episodes of the show became a big hit and gathered a lot of views, people cannot wait for the next episode to release soon. Here is what you need to know about the release of episode 6.

As the new episode is released every Thursday, we will be expecting episode 6 to be released on 11th August 2022 Thursday. You can watch new episodes of Koffee With Karan season 7 every Thursday. So here you have something to make your weekdays a little lighter and better with Karan and your favorite Bollywood gossip.

The complete list of guests is still not official but according to the trailer of season 7 Ranveer Singh, Alia Bhatt, Akshay Kumar, Samantha Ruth Prabhu, Sara Ali Khan, Janhvi Kapoor, Tiger Shroff, Kriti Sanon, Shahid Kapoor, Kiara Advani, Ananya Pandey, Vijay Devarakonda, Varun Dhawan, Anil Kapoor are expected to grace the couch of Koffee With Karan this year. As Ranveer and Alia, Akshay and Samantha, Sara and Jahnvi have already made it to the couch we can expect either Tiger Shroff and Kriti Sanon or Varun Dhawan and Anil Kapoor to grace the couch of the 6th episode of the show.

ALSO READ: Best Seasons Of Koffee With Karan That Has Created Buzz So Far!

The trailer of season 7 was released a few days back before the first episode came out. People have been waiting for the season for a very long as any new season of Koffee With Karan was not released in the last two years due to the covid-19 pandemic. And this year when they finally thought that season 7 will be released Karan Johar releases an official statement that Koffee With Karan will not be returning for any more seasons. After 2-3 days of his official statement, he released another statement that the seventh season of the show will be released but only on the OTT platform. After the release of this statement, fans were so happy to hear that their next favorite talk show is going to be back. The trailer looks very interesting celebrities are seen having so much fun and making some incredible comments about their personal relationships and life. The pairings of the season are also something that we’re looking forward to after watching the trailer

The show premiered on July 7, 2022, with Ranveer Singh and Alia Bhatt being the first guests of season 7. This season of the show has the most unexpected pairings as compared to the previous season of Koffee With Karan. One interesting thing about this is that we are going to see a lot of South Indian actors and actresses making their debut in the popular show Karan. We can also see a glimpse of some very famous on-screen Jodis light Shahid Kapoor and Kiara Advani, the most cherished on-screen couple from Kabir Singh and Tiger Shroff and Kriti Sanon who appeared together in their debut film Heropanti. The season of the show looks promising and entertaining just Like The Other seasons of the show.

Where Can You Watch Koffee With Karan Season 7?

ALSO READ: Is Koffee With Karan On Netflix? Where To Watch It?