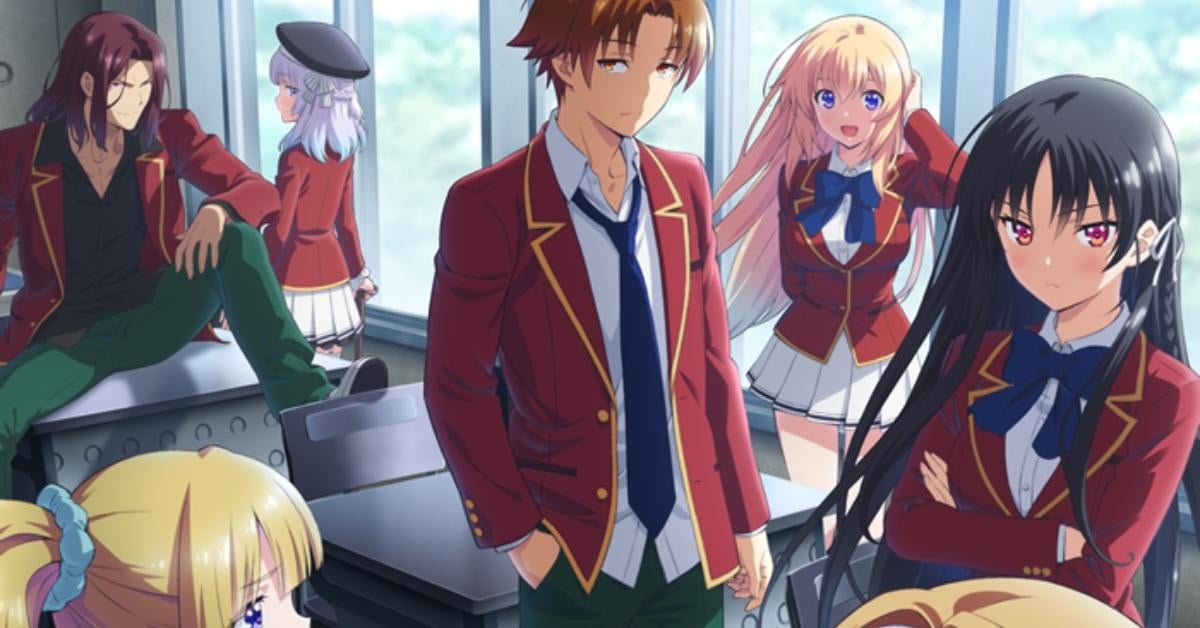 Classroom of the elite is a Japanese anime series which is filled with suspense and thrilling situations. There is a lot of hype amongst anime lovers for this anime, like one of the main characters, Ayanokoji Kiyotaka. Ayanokoji is considered one of the smartest characters in the anime world and is known to be highly manipulative and smart. Irony has it that in the anime, the character is placed in a class made of people with not-so-smart brains. Ayanokoji, who wishes to have a taste of normal life, somehow gets involved with Suzune Horikita, the class representative of class 1-D, and has to work with the students of low rank, to help her get promoted to class 1-A, the class for the smartest students. If you are unaware of the basic plot of the anime, this information is normal to go bumper over your head. But worry not, this article will provide you with all the events the anime has previously focused on and updates on the future of the anime. You can learn this information for a good recap, pique your interest in watching the anime, or use it to find out basic information about the masterpiece.

As of now, the anime has a total of 2 seasons, with the second season currently in its run. The first season was released on 12th July, 2017, and wrapped up on 27th September. The first season was a massive hit, gaining tons of fans waiting like hawks for season two. As the anime is a light novel adaption, there was a high chance that the series would have a season 2, which was proved to be correct when we received the news after almost 5 years. The series took its own sweet time to grow and we finally got our first episode on 4th July, 2022. Fans always knew there would be future seasons, but little did they know that it would take them this long. Still, the fans consider the wait to be worth it, as it’s obvious to everyone that the light novel has covered a lot of content within the years, giving us high chances for multiple future seasons.

Classroom Of The Elite was released on AT-X and a few other channels on its release. Both the available seasons are produced by Studio Lerche. The second season of the anime is directed by Yoshihito Nishōji, and the first season directors, Seiji Kishi and Hiroyuki Hashimoto, made a comeback as chief directors. Lerche has already announced the updates for season 3, confirming that they are currently in the working process. Since the anime is in the works, we can expect it in mid- June or July of the year 2023. This prediction can only come true if there are no delays or accidents during the time. Since season 2 is currently airing, fans are overjoyed by the news of a potential season three and are curious about the events that are to take place.

We expect the return of the same characters, and not giving too many spoilers, we expect the events of season 1 and 2 to be the perfect framework for the upcoming season. We expect more thrills and suspense, along with more challenges and tension between the students and the clash of the classes, at the prestigious Advanced Nurturing High School. We expect the initial makers of the seasons to return along with a few new additions to the production, direction and music crew. The spotlight of the anime series is the peculiar Class-D and the troubles they have to face for being at the bottom. The rebels will come back strong with their backstories and new characters are expected to blow our minds. Ending the updates on season 3, we have a recap of the plot now. If you are curious about the series and are planning on watching it, the events might seem like major spoilers. We suggest you turn your heads right now, if you are yet to stream the series.

Classroom Of The Elite Story

Since you have been warned, we will move forward to summarising the basic plot. If you are watching the anime or have completed the first season, you are well aware of the tension between the students and teachers. You also know that although the main focus is on the Ayanokoji-Horikita duo, the other characters have ample time to shine. The characters have been slowly improvised and their stories are being loved by many, who have already started researching the romantic shipping between the characters. As mentioned earlier, the novel has covered a lot and is way, way ahead of the anime, you will be able to find your answers. However, you shouldn’t be too happy. The situations in the novel and anime can change paths and you might not meet the conclusion of your expectations. The original plot focused on a special government high school, made for the current generation, who are to lead the nation. The school provides freedom and special treatment, along with many materialistic prizes, to motivate the students and give them a taste of real life at a young age.

The school has different classes and students are placed in each class on account of their grades. Teachers and students of the school are highly biased against the D-Class, which consists of the students with the lowest grade in the school. A mysterious boy named Ayanokoji is a part of the class and wishes to have a normal life. As mentioned earlier, he gets mixed with Horikita and his dream of having a normal, average and silent life is crushed. He doesn’t show any human emotions and has no interest in making friends but, because of Horikita, he now has to interact with the other students and get involved in their class and school matters to improve the overall grade and treatment of the class. Now, as you might be aware, Ayanokoji is no normal student. He is highly manipulative and is ruthless, lacking affection. He thinks of various ways to cheat his way legally and help the class. Insane right! He also makes sure that he is not in the spotlight and makes use of other people to carry out his plans. He makes them seem as if they have the power and enjoys his life as an average student.

In the anime, we also come across Ayanokoji’s childhood and his life in the insane ‘White Room’. Quick recap, the White Room is the maniac faculty, which was made by Ayanokoji’s father, aiming to raise geniuses. Ayanokoji was a part of the 4th generation of students in the White Room, and the lonely ace, who managed to evolve instead of plain survival in hell. Our site has more information on the White Room, so feel free to check for more details. Ayanokoji is smart enough to purposefully score 50/100 in every test to seem average. He has tried his best to hide his smart self and his identity from everyone else, but, as the anime moves forward, slowly people are starting to catch hold of his abilities. He has refused to give the test for Class-A, and has refused the invitation to join the Student Council, to keep a low profile. His intellect is completely based on books and the boy is unable to express his emotions outside the events of the book. As of now, the anime’s plot has majorly focused on his mind games to improve the living conditions of his classmates and the story is still in its base level stage.

Where To Watch Classroom Of The Elite?

Classroom Of The Elite is available on many streaming platforms, thanks to its popularity. Although the anime is location based, it is available in many countries apart from America, the USA and other Asian countries for streaming. The most common streaming sites are Crunchyroll and Funimation. Crunchyroll provides English subtitles and Funimation provides English dubbed episodes. Apart from these two major sites, the anime is also available on other anime streaming small platforms. In case you belong to a region where the anime isn’t available, we suggest you use VPN. VPN provides you with the liberty to choose a country of your choice and change your streaming location. This helps you to trick the site and access the content available in other countries, which is hard to find in yours. You can also gain access to country exclusive content. This process is completely legal and super comfortable to use. The anime can also be found on YouTube and you can search for the relevant videos, until they are brought down. You can also buy the series from the Google Play app.