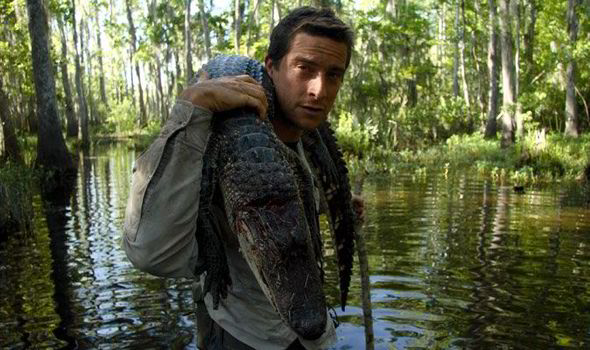 Man Vs Wild is an American survival television show featuring the travel adventures of Bear Grylls, who is also the host of the show. Born Survivor: Bear Grylls, Survive Game or Bear Grylls in the United Kingdom, are other popular names the show goes by ever since its release on 10th November 2006. The show also aired a pilot episode titled ‘The Rookies’ on 10th March 2006, which received good reactions. The series originally premiered on Channel 4 in the United Kingdom, but since its popularity rose, it’s been broadcast on Discovery Channel U.K. The series has been produced by the British television production company ‘Diverse Bristol’, and has a total of 7 seasons and 73 episodes along with 4 special episodes. The approximate runtime of the show is 45 minutes and the show is well known for featuring popular personalities and celebrities as guests, who travel alongside Bear Grylls in his survival adventure. In 2012, Discovery Channel terminated its contract with the Grylls following a legal dispute and cancellation of the series. In 2019, Netflix brought the Grylls back into action and the series is back with a new name, You vs Wild, with 8 episodes running approximately 20 minutes each.

Is Man Vs Wild Staged?

During the past years, there have been many claims about the show being fake and completely rigged. Following the accusations, the team clarified that there are indeed some scenes which required some previous planning and some instances where the staff and crew helped Bear Grylls during his adventure. In 2006, one of the crew members admitted that some of the scenes in the episodes showcast Grylls in a way that seemed like he was a lone ranger in the forest, which was not likely the case. A U.S survival consultant, Mark Weinert, also raised issues about the show’s production and the overall manipulation of the show. The remarks included a scene where the raft was built by the crewmates and Bear Grylls appearing at the end, following the filming in which it implied that the raft was completely made by him. Another such remark was when Grylls was said to escape an active volcano, leaping across the lava and avoiding harmful and poisonous gases when it wasn’t likely the case and the stunts were unfavourable for humans to do. The scenes were enhanced with special effects, hot coal and smoke machines without prior information about the staged drama. In the ‘Desert Island’ episode, the makers showed that the adventurer was trying his best to survive on a desert island with no help when in reality the shoot was done in an outlying part of the Hawaiian archipelago and Grylls used to rest in a motel after the shoot at night. The makers, production team and Grylls took turns explaining the various situations and clarifying the actions, but to no avail. The public trust in the transparency of the show had already declined. The News was followed by many other similar instances when the makers were not completely honest with the production following the many controversies. The new show, powered by Netflix, promised a fair and transparent show, where every situation would take place in the most realistic way possible and the adventurers would be honest with their adventure, showing facts.

ALSO READ: List Of Hulu August 2022 Release! Be Ready With Your Popcorns!

Where To Watch Man Vs Wild?

Man vs Wild is available to rent, buy or watch at Amazon Prime Video. The series isn’t available on any large platforms outside the United Kingdom, so if you’re in a location where you are not able to access the series, we suggest using VPN. VPN allows you to watch your favourite shows from anywhere in the world with an internet connection. You just have to change your location to the place where the series or show is available and enjoy it. VPN is definitely a good and cheap buy as it allows you to have access to even the rarest series which are unavailable in your location. You can easily watch Man Vs Wild using this method, and the show is available on other small platforms depending on your location. You Vs Wild can be viewed on Netflix, which features special episodes with stars and other personalities. Following the show’s popularity and controversies, it’s tough to say if the show will be available on other big platforms in the future, but we will surely update the article on official news.

ALSO READ: Disney Hotstar August 2022 Releases That Are Much Interesting!