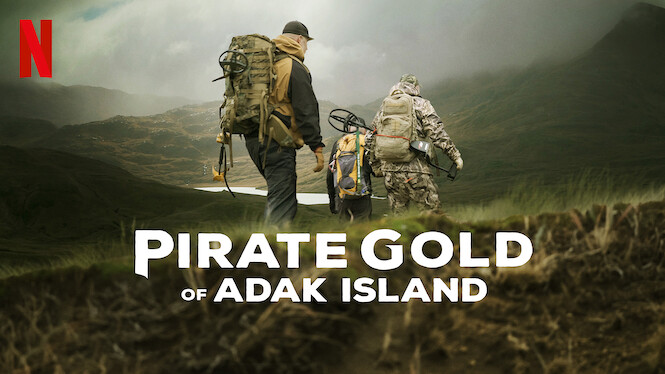 Pirate Gold of Adak Island is a documentary which has been recently released by Netflix. The story of
this documentary is based on true events all the way in the 1800s when a pirate visited this remote
island and hid his gold coins worth 359 Million dollars in milk cans and buried those cans on the island. The Island Adak is located in Alaska where no one lives, it is a completely secreted island with no trace of living.

Netflix released this documentary in eight parts. Each part has a runtime of 25 to 35 minutes. These 25
to 35 minutes are filled with adventure as a team of 5 members takes us to this island and hunts for the
treasure that was hidden by the pirate hundreds of years ago. This series is a complete package for the
people who love adventure and find historical series interesting.

The team of five people includes Jay Toomoth, Burke Mitchell, Brian Weed, Dr M. Jackson, and Thom
Splitter. This is the group of five people who visit this Island and go on an adventurous journey where
they search for 150 cans of gold coins.

Ever since the series has been released and people have watched it there has been a lot of speculation
as to whether the series is based on true events or is scripted. Many of the viewers have commented
that the series is completely scripted. Although there is a lot of evidence in the past which has proved
that the story of the pirate hiding his gold coins on the island is actually true, some viewers are still not
convinced that the documentary is based on true events.

Netflix has released the series in the documentary form which includes interviews of the team members who visited the island and narrations about the events that took place during this journey. The Netflix team has tried their best to give all the vibes that the story is actually true but somewhere did lack and fail to give us that experience.

ALSO READ: 25 Saddest K Dramas That Will Make You Cry!

While many people have a lot to say about the series some of them have a judgement that the series is
exaggerating the events and making it dramatic for the viewers to believe the reality. Even if the events
shown in the series are true the over-exaggeration did not let them believe in the reality and made it
look like an adventurous drama which was scripted.

Apart from whether the plot was based on reality or not the series is an interesting adventure with a lot
of historical stories tied to this adventure. If you are someone who likes Pirates of the Caribbean or if
you’re someone who likes movies and series related to pirates then you will enjoy watching the series.

Not only for the people who love pirates but for the ones who love adventures and especially
adventures which are related to true events and history, this series can be a perfect addition to your
watchlist and you won’t regret watching this adventure. It takes you on a Treasure Hunt ride which will
leave you guessing what happens next and where the story will lead. Overall the experience of the series is not very bad and one can watch it if they enjoy such an adventurous series.

The story of this Island starts in the 1800s when a pirate named Gregory was running away from the
government and had a lot of gold coins with him which he wanted to hide in a safe place when no one
else could find them. Finally, he reached a secluded Island and thought that the island would be a
perfect place for him to hide his gold coins. Soon he filled 150 milk cans with gold coins and buried them on the island.

Is Of Pirate Gold of Adak Island Scripted or Real?

There have been many allegations about this Netflix series that the plot is not true but if the stories are
believed the plot of the series seems to be true and based on real events. Netflix has announced that
the series is a reality show and presented it in the form of a documentary.

This documentary has narrations of the events as well as interviews of the five team members who went on this adventure. In these interviews, they are seen expressing their feelings when they were on the adventure and describing the events. How they felt when they were hunting for this treasure and what all problems were faced by them during this journey. These interviews and narrations are what make the series more realistic.

But there is also another side to the story. It is said that the events depicted in the series are intensified
more than the reality so that the viewers find it interesting. There has been a lot of editing which made
the scenes look unrealistic. The interviews and narrations given in the series do not seem to be much
more realistic and look like a script that was given to the team members to add some drama to the
series and make it more interesting for the viewers.

Yes, there will be a season 2 for this reality show. Season one had eight parts and at the end of the final
episode, the team finds something tangible. They later discuss that they will come to the same place
again to hunt for some more treasure and look for the gold coins. This part of the finale episode hints
that there will be another season for the show. Although, the Netflix team has not renewed the show
for season two yet and there is no official announcement regarding this but looking at the finale episode it is pretty sure that there will be a season two.

Although the plot of the series is completely based on true events, the editing is done by the Netflix
team to make this series more successful actually backlashes on them as it made the series look more
unrealistic and give a chance to the viewers to question the reality of the series. Although editing
documentaries and intensifying them to make them more interesting is not something that has been
done for the first time. Every time a real story is recreated for commercial purposes the raw essence of
the story is finished by the makers and the series is made more dramatic which actually ruins the
experience of the viewers.

If you are someone who wants to watch something adventurous and interesting related to Treasure
Hunt and history then you will enjoy the show. Regardless of the series being based on the true events
it is a good show which can be enjoyed and a one-time watch. The IMDb rating for the series is 5 out of 10 whereas 72% of Google users find the series good and liked it. After watching the reviews and ratings of this Netflix original we wouldn’t mind recommending you this adventurous reality show.