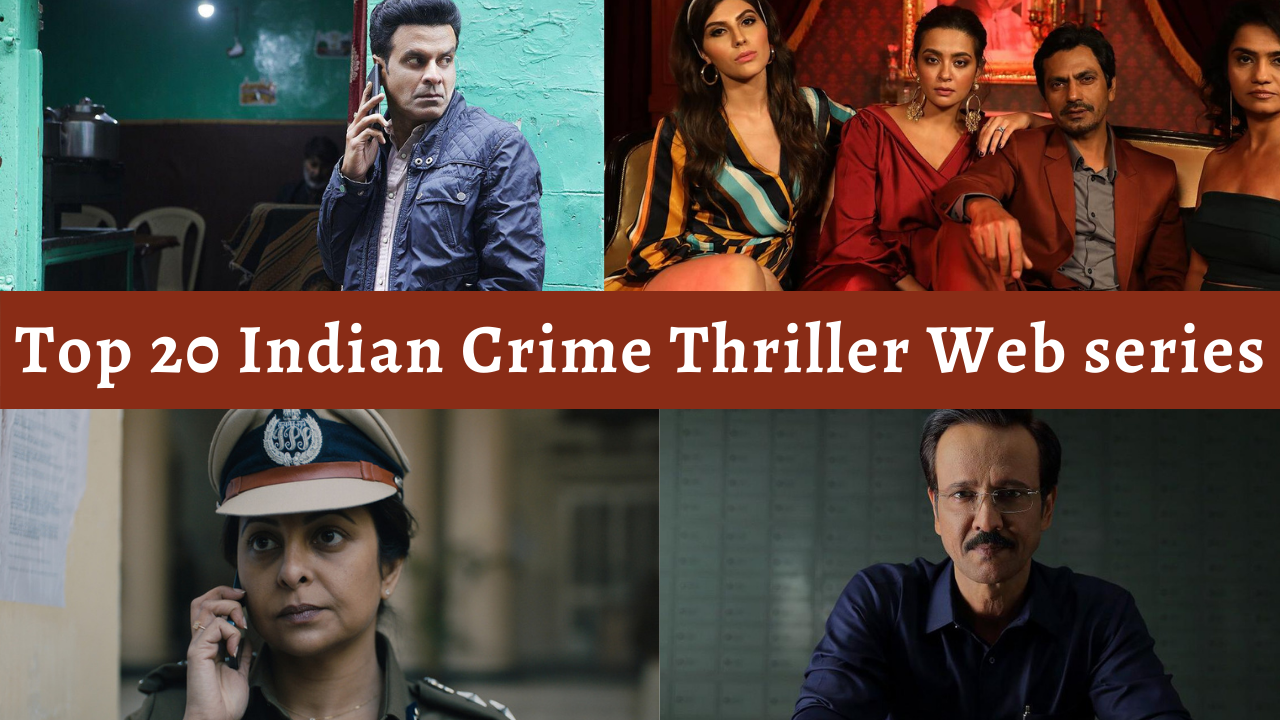 OTT platforms are now a big deal for India. It has attracted millions of viewers from the country. There are brilliant web series that you should totally add to your watchlist. There are some incredible crime thriller web series made in India. You will be hooked to your chair until the end while watching every series mentioned. Let’s check out the top Indian crime web series you should totally watch once.

Delhi Crime is a web series that is based on a real-life rape case that happened in Delhi in the year 2016. The show describes the incident of what happened in the rape case with a team of cops. The team of Cops is given the task to find out who was involved in this heinous crime.

Cast: Shefali Shah has played a major role in the series of DSP. The other actors of the cast include Rasika Dugal, Rajesh Tailang, and other brilliant actors.

The web series had played a brilliant job in handling such a sensitive subject and bringing reality to the audience but has faced criticism too.

This series depicts the story of a man named Sartaj Singh who has to save the city Mumbai from an unknown thread that could be very dangerous for the city.’Gaitonde’ is a character from the series who is a criminal and has made for a nail-biting narrative. Though the second season faced criticism you can totally watch the first season on Netflix.

The name of this series is a bit confusing but if you have watched the family man you will totally understand the concept. The family man is a show about an Intelligence Officer who has two lives: one on the field where he has to be in his ‘A’ game always and the other at his home where he is a lazy husband. This series is directed by Raj and DK which is binge-worthy and has covered multiple storylines. The main factor that made this web series famous is that it keeps you hooked until the end.

Season 2 of family man will be premiered in 2021 so better watch the first season on Amazon Prime Video.

Special Ops is also a binge-worthy web series. Special Ops follows the story of an Intelligence Agency where the head of the agency believes that the terrorist attack in the country has a common thread. The storytelling by Neeraj Pandey will keep you hooked to your chair until the end. In long format shows like these, it is pretty hard to keep the audience interested for multiple hours, but Special Ops has done a pretty great job here.

The intelligence agency tries to find the common thread in all the terrorist attacks.

If you are really interested to see the reality of our country you should totally watch Paatal Lok. Paatal Lok has described the reality of our country in a pretty good way. Paatal Lok follows the story of a cop who is assigned and attempt to murder case of a journalist. As the web series continues, it dwells deeper into the characters and how they are being forced by the authorities. The show attracted a lot of fans as soon as it was released in 2020.

Cast: The main cast of the show includes Jaideep Ahlawat and Abhishek Banerjee. They both were applauded for their work in Paatal Lok.

‘Did he do it? or ‘did he not?’ is the basic plot of this web series. The web series is based on a British series of the same name. The show covers the story of a man who finds himself convicted of murder. The web series is quite engaging. Vishal Furia and Tigmanshu Dhulia are the directors of the show criminal justice.

Cast: Vikrant Massey has played a very brilliant role in the series. Criminal Justice casts Pankaj Tripathi, Vikrant Massey, Jackie Shroff among others. Everyone was praised for doing such a brilliant job in the web series.

This web series was really not made with so much hope. But the fame Asur gathered over time is commendable. Asur has tried to combine two totally different subjects that are mythology and crime. This has made the web series with a very unique concept and a very thrilling web series. While many of the people didn’t like the show’s plotline the presentation is so intriguing that it will make you binge this at once. The story of the show follows a cop who is basically Kidnapped by a mythical serial killer.

Cast: The main cast of the show includes Arshad Warsi, Sharib Hashmi, Barun Sobti among others. Everyone was applauded for the work they have done and as a result the show received great popularity.

If we talk about Mirzapur, the second season of Mirzapur became the most awaited show on the Indian webspace. Mirzapur is a web series that follows the story of two up comers who live in a small town called Mirzapur and who are trying to make a name for themselves under the shadow of a don. For those who haven’t watched this series yet, you should totally watch it. Both the seasons are very great but the second season was not liked by everyone. Both brothers enjoyed each other’s company, but then it turns out the worst.

The Raikar Case is a web series available on Voot Select. It is a whodunit Mystery that suspects within a family. The dynamics of this family are very mysterious and it has made everyone the suspect of the murder. And therefore this series will make you stick till the end. The show has created a very great mystery and that is why the audience has loved watching it.

Have you ever heard of an Israeli series named hostages? The Indian hostage web series is basically the remake of an Israeli series with the same name. The web series covers the story of a doctor’s family who is held hostages by forces who want her to assassinate a political figure during a surgical procedure. Then he shows explains the doctor’s dilemma where she has two choices, between her ethics and the family. This story is dealt with in a very interesting way because of the cast. The web series is directed by Sudhir Mishra and it is very engaging.

Cast: Ronit Roy, Aashim Gulati, Tisca Chopra, Mohan Kapoor, Parvin Dabas are some of the cast of the web series, hostages. You should totally give it a watch.

Rangbaaz is a web series based on true life events. The series is based on one of the most wanted criminals of India, Shri Prakash Shukla. The scene of the series is set in Uttar Pradesh in Gorakhpur district in the nineties. The show basically covers the story of a gangster who was nobody at the starting but then became a feared villain of his times. Rangbaaz is all about violence and guns and has also covered the stories of police.

There are two seasons of the series and the second season has started Jimmy Shergill.

Breathe is an amazing crime thriller web series you should totally watch. Amazon prime videos breathe series covers the story of a father who is in a desperate Run so that he can help his son save his life. ‘What can you do to make your people breathe?’ is the basic plot of the series.

R Madhavan has played a very great role in being a father. The cat and a mouse chase in the web series will hold you until the end. The web series tells you the duties a man plays in his life.

miss universe Sushmita scene has made a blockbuster come back in the newest web series Arya. Sushmita Sen has played the major role of Arya serene. the story follows a woman named Arya when she finds out that her husband’s original profession is rippled by a discovery. an attack that is made on her husband puts Arya all in front of all the activities. after that, she has to protect her family at all costs and lead to a new transformation. Arya is basically based on a Dutch drama series named penoza.

The final Call web series will totally take you until the end. The plot of the show is thrilling at every turn. Arjun Rampal has played a major role in the series. Arjun Rampal is an ex-serviceman and a troubled pilot who decided to suicide on a flite to Sydney. And further, the story takes you to the past lives of all the passengers and their present problems. This will totally take you to a next level.

Apaharan is a crime action thriller web series. Apaharan has covered the story of a cop named Rudra who makes a deal to kidnap a girl in exchange for money. This began as foolproof and a harmless plan but then it turned into a series of criminal activities that made Rudra’s life difficult. Nidhi Singh and Mahi Gill are the major cast of the series. The show will totally give you a retro vibe. You should totally add Apaharan to your watchlist.

Cast: Arunoday Singh is the lead of the show playing the role of Rudra, the cop. Nidhi Singh, Mahi Gill, and Varun Badola, and Sadanand Verma are the cast of the show among others.

Abhay is a crime-thriller series on Zee5. Kunal Khemu has played a major role in the series. The series covers the story of Abhay who is a crime investigator using a criminal’s mind. The series continues to tell how Abhay deals with inner evils while solving gruesome criminal activities.

Do you love cricket? If yes, this series is totally for you. The show will basically cover the story of corruption and dishonesty in the world of cricket. It will tell you how deceit has become an important thing for survival in the cricketing world. The show is so interesting that you will totally make it to the end. The story also has various cricket elements that will make you stick to it.

Cast: The cast of the series Inside Edge includes- Vivek Oberoi, Angad Bedi, Richa Chadda, and Tanuj Virwani among others. Vivek Oberoi was praised for his role in the series, as a result, people loved watching it.

Jamtara is a low budget web series but has gained a lot of viewers over time. Sunny and Rocky are two young men who ran a run lucrative phishing scam in a small town named Jamtara. Things were pretty good at starting but as the story continues, a cop and a corrupt politician got involved in the story. This made their scam dangerous. The series is directed by Soumendra Padhi.

It wasn’t a high budget web series but has gained much popularity.

Cast: Nia Sharma and Namit Khan have played the major role of Disha Aggarwal and Aryan Mathur respectively. Tia Bajpayee, Priya Banerjee, Rahul Sudhir is the cast among others. .

The story revolves around an author who seems to be living the perfect life because a mishap he faces changes everything completely. Rajeev Siddhartha and Priya Banerjee have seen in the lead roles as Kiyaan and Kashti respectively. But the show hasn’t received much popularity.

Cast: Priya Banerjee, Madhussneha Upadhyay, and Rajeev Siddhartha is the cast among others.

So what are you waiting for grab your chairs and popcorn and start binge-watching all of these shows.

MUST-READ: Wonder Woman 3 Release Date: Here’s all you should know