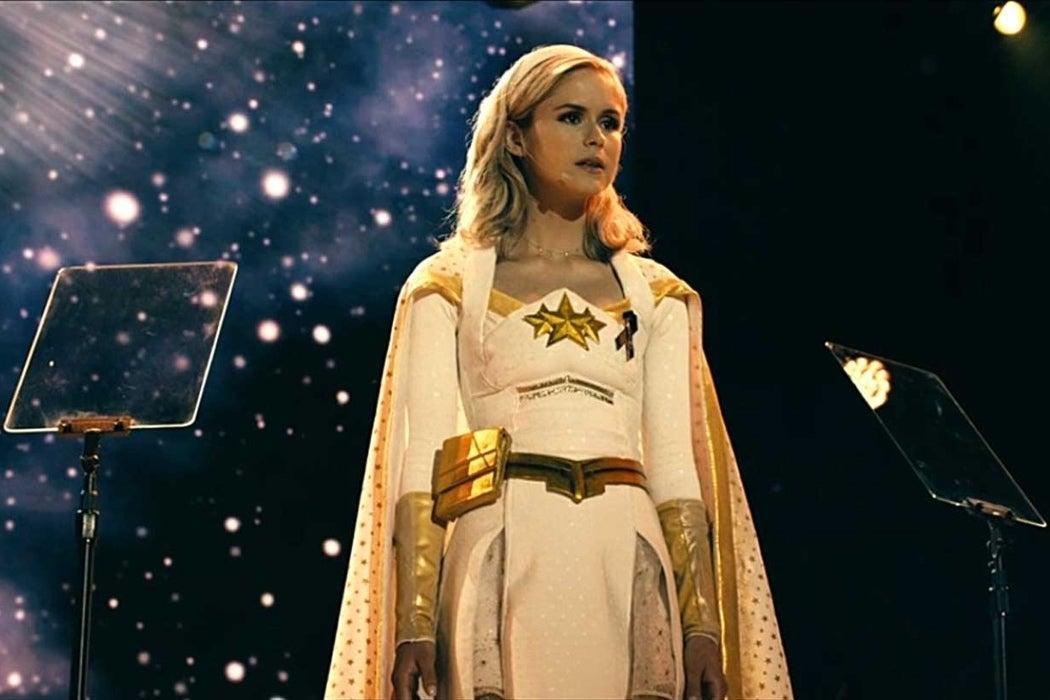 This June, the third season of popular American superhero The Boys has been released on Amazon Prime Video. Originally, started airing in 2019, and currently, the third season of The Boys is airing on the Amazon Prime Video. In the action and drama series, you will see various superheroes of different characters and personalities with various motives. The team of these superheroes is called The Seven. One of the members of The Seven is Starlight aka Annie January. Annie January is one of the favorite protagonist characters in the TV series. She is known as the only superhero in the team who selflessly wants the well-being of common human beings. Because of this character of Starlight, the actress Erin Moriarty who is playing the character has also become very popular nowadays.

While watching The Boys, fans always wonder that on what character or superhero the Starlight is based on. Who is the inspiration for creating the Starlight character in the series? If you are also among those, who wonder about this question; so here are we with the answer. Apart from telling which character Starlight is based on, we will also tell you the back story, powers, and personal life of Starlight. Hence, read the full article to know everything about Starlight aka Annie January.

The Boys: Who Is Starlight Based On?

Starlight superhero girl Annie January of The Boys is based on a DC comic book’s character of the same name. The Boys is a DC comic book written by Garth Ennis and Darrick Robertson on which The Boys TV series is made. The comic book was released in various chapters between 2006 and 2012. A young girl with superpowers named Annie January was the supporting character in the Dc comic book. She later became superhero girl Starlight who thinks for the betterment of every human being. In the ongoing TV series The Boys, superhero Starlight is based on the same girl Starlight of Garth Ennis and Darrick Robertson’s book. Notably, the Starlight of TV series is inspired by DC comic’s superhero Starlight. But she is not the exact copy of the comic character in some instances.

READ MORE: Is Tehran Based On A True Story?

Is Starlight In The Boys Comic And The Boys TV Series The Same?

The answer is a yes and a no. Because the superhero character of Starlight is adopted from DC comic The Boys only. Her costume designations and overall past life are shown similarly in the book and TV series. But if we go deeper the story of Starlight aka Annie January is not the same in The Boys TV series and The Boys comic book. In The Boys comic book, Starlight was merely a supporting character who did not have major parts in the story. However, in the TV series, her character is expanded and she became the main protagonist of The Boys. This is because the character of Starlight is very appealing and positive. Starlight always got a good response from readers of comics, hence this time the makers of the TV series decided to bring her as the lead character of the show.

In the comic book and the TV series, Annie’s childhood was shown difficult and struggling but for a different reason. In the DC comic, Annie was born with superpowers because of which a sudden light came from her. This lumination blinded her parents and others around her when she was in the hospital after birth. Therefore, her parents gave her to Vought. Where she was only trained to become a strong superhero and she did not have a normal childhood with her parents like other kids. While in The Boys TV series, Annie is bought up alone by her mother. She is not shown as a born superhero. Rather, it was her mother who wanted that her daughter becomes a superhero a join The Seven. That is why her mother agreed on giving Compound V to her daughter. This compound gave them superpowers to Annie and she became a superhero. It is also shown in the Tv series that because of this decision of Annie’s mother, her father left them.

Like this, there are various other stories of The Boys TV series and The Boys comic book that does not match. But still, there are similarities between the two.

Anni’s Journey to becoming a superhero is different in the DC comic book and in the TV series. In the Tv series, Annie January became the superhero Starlight because of her mother’s ambition who wanted her to become a superhero. Hence, Annie drank Compound V which gave her some special powers. Later, her training became from a very young age. But as she grew up, she witnessed the dark sides of superheroes as well. She saw how selfish and emotionless some superheroes in The Seven are. While she selflessly wanted to work to save the common people from evil. This attitude and beliefs of her made her a popular superhero among people and among the viewers of The Boys. However, this journey of Annie was not easy. She faced various challenges. Sometimes, she was also forced to go against her morals and ethics. But amid all this, she remained the most selfless superhero of The Seven and the whole The Boys Tv series.

Annie or Starlight has various superpowers and abilities. With these powers, she can fight her enemies and save innocent people. Her main superpower is absorbing electricity from around her. Se can absorb the electricity from which various lights, fans, and other electric appliances work. This way, she manages to create a blackout in a particular area for few times. However, after absorbing the electricity, she has to keep it within herself. It is on her abilities that for how much time she can hold the electricity inside her body. This power is used by her to create blackouts and disrupt electricity devices.

Apart from this power, Starlight also has a Light attack power. Probably, because of this power her name s Starlight. In her hands, Annie has some special powers with which she can create fire blasts and attack people with fires. This fire light is actually her own energy which could be converted into fire and help her in attacking people. Apart from her hands, Starlight also has lights in her eyes that shine from time to time. Apart from these unique powers, Starlight is also physically very strong. She can hold heavy items, and do one hand chin-ups. She can also take bullets over her without harming her body. You can not harm her by attacking her with bullets. Additionally, Starlight is also a martial artist and efficient boxer.

MORE FOR YOU: Is Suzhal: The Vortex Based On A True Story?

The powers that Starlight carries come with responsibilities. And Annie is a mature and responsible superhero. She is a very kind-hearted girl, who selflessly wants the well-being of humanity. Hence, she makes the right use of her powers for innocent people only. Above all, after helping and saving people, Starlight does not like the spotlight and media attention. She does not believe in fame and popularity. She just wants to use her powers for the well-being of people.

Annie aka Starlight and Hughie were first met in Central Park. Hughie is a part of The Seven. He joined the team after A-Train killed his girlfriend, Robin. Notably, Hughie went close to Annie, so that he could put a bug into her phone through which he and the Seven could find out about Compound V. Later when the truth of Compound V came in front of Annie, she helped and spied for The Seven. Amid all this, Hughie and Starlight came closer. With time Annie and Hugh started sharing deep relations. They also became sexually active in their relationship. But she was feared by Vought and Homelander and concerned about their action if they found out about Hugh. That is why she started making distance from Hughie and gave a break to their relationship.

Where To Watch The Boys?

ALSO READ: Is Interceptor Based On A True Story?