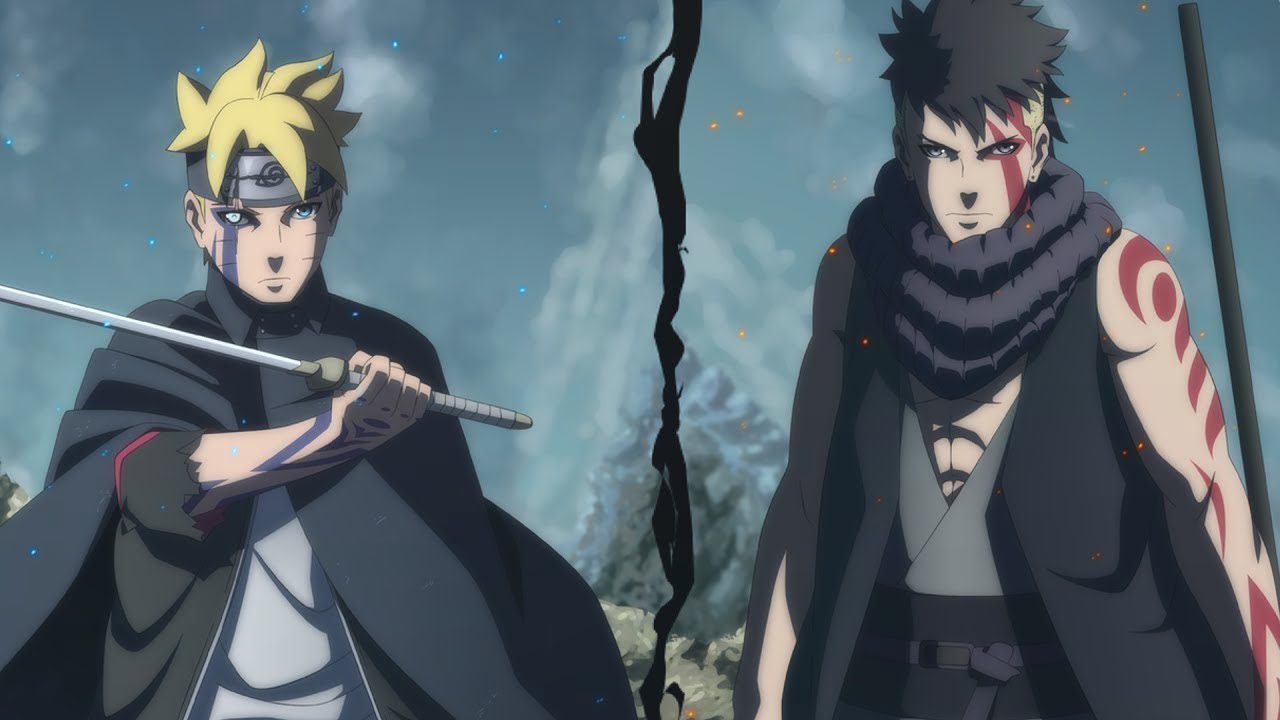 Kawaki is a fictional character from the manga Boruto: Naruto Next Generation designed by Mikio Ikemoto and created by Ukyō Kodachi. The character is voiced by Yūma Uchida in Japanese and Micheal Schwalbe in English. Kokatsu is his biological father but is later adopted by Naruto(further details on how are provided in the article). Gradually, the Uzumaki family became his adoptive family and the only family to be announced as of yet. Kawaki made his first appearance in Boruto: Naruto Next Generation Chapter 1: Boruto Uzumaki. He was created as a rival for Boruto, and his first scene was a flashforward scene where he, as an older Kawaki, has killed or sealed Naruto and has levelled Konoha, declaring the end of the shinobi age to the older Boruto. The character received a lot of criticism for his attitude towards Naruto, his family and everyone else. He was also hated for his reckless violence in order to protect himself and his distrust of everyone. But like every other main lead character in Naruto and Boruto, this character too managed to change people’s minds. Throughout the manga and anime, we can see how Kawaki has a 180° change in his personality.

He slowly starts to trust the Uzumaki family and thinks of them as their own. He mixes with the town’s people and cares for them, he is also shown to be a good, dependable elder brother to Himawari, etc. The thing that touched everyone’s heart was how he sacrificed himself multiple times to save Naruto and the others. His respect for Naruto keeps on growing and he doesn’t like anyone talking badly about Naruto. He even learns how to control and focus his chakra, shadow clowning and other skills from Naruto, and surprises everyone, including the viewers, with how smart he is while using them at the most unexpected time. He turns out to be a once selfless, innocent and lovable kid who is hurt to the point he is not willing to trust anyone anymore. What made him like this? Why does he qualify as Boruto’s rival? What are his powers and why is everyone, including Naruto and his warrior friends, worried about them? All of these questions and more will be answered in this article. Let’s start with finding out Kawaki’s power origin and what it is that makes it the power that scares and worries everyone around him.

How Kawaki Become an Ōtsutsuki?

It all started with Isshiki Ōtsutsuki, an alien, and his greed. He was a member of the Ōtsutsuki clan and the leader of Kara. Over 1,000 years ago, Isshiki came to earth with Kaguya Ōtsutsuki, to plant a special tree which would bear the chakra fruit. Kaguya was the offering, which is an essential element, and had to be sacrificed in the process of making the fruit. But, she injured Isshiki fatally, destroying the lower half of his body. Isshiki, being sly and smart, shrunk himself when he realised he was incapable of defeating Jigen Ōtsutsuki with his injuries and entered Jigen’s body through his ear. He absorbed Jigen’s nutrients to survive the injury. He slowly gained control over Jigen’s body and embedded a Kāma in him. He planned to use himself in Jigen’s body as a sacrifice for the ten tails, who would bloom into a God tree and bear Chakra fruit.

Of course, he wouldn’t just sacrifice his life as a whole. He started searching for an extra vessel. Before the sacrifice, he wished to transfer himself into another body so he could successfully revive himself after the sacrifice and get his hands on the fruit. He quickly started cultivating Jigen’s body into an Ōtsutsuki and started his search for a capable vessel. He formed Kara and became its leader to cultivate the chakraalon-fruit-bearing tree, capable of consuming all life force on earth. Delta, a member of Kara, tested Kawaki’s blood and found him to be a potential candidate for the vessel. Isshiki gained Kawaki’s custody and prepared him for an experiment. Kawaki, along with Code and a few other boys, took part in it. Kawaki was the sole subject to pass and successfully inherited the Kāma. Code gained a white incomplete Kāma and the rest died.

Isshiki forced Kawaki to train and be stronger and master his Kāma, thus fulfilling his job as the vessel in the future. Isshiki was ruthless during the training and didn’t listen to Kawaki at all, instead, he hit him whenever he was faced with a question. On their way to transferring Kawaki for a field test, their untraceable and invisible blimp faced an accident. The aircraft malfunctioned and crashed, setting Kawaki free. Thus, he escaped Isshiki.

His life With Kara

As a child, Kawaki used to chop wood and earn money to buy alcohol for his abusive, alcoholic father, Kokatsu. A goldfish merchant noticed the boy’s interest in goldfish and invited him to a goldfish show. Kawaki’s father finds the invite in his pocket and punishes him for interacting with strangers, and starves him. Kawaki gets bullied by some boys in the town and the merchant comes to his rescue. He takes pity on the boy and offers him the job of selling goldfish in other villages. Kawaki breaks an alcohol bottle on his way home. By the time he reaches home, the bottle is empty. Angered by this, Kokatsu locks him. He is approached by a mysterious man(Jigen), who shows interest in buying Kawaki and offers a huge sum. Kokatsu agrees despite Kawaki’s constant refusal and forces him to leave. On their way back, they come across the merchant, who turns out to be a human trafficker. He wants to take Kawaki. Jigen takes care of the merchant and they both reach Amado’s lab. Kawaki has to take part in a test, where 15 potential vessels take part, including himself. Kawaki succeeds and is trained to be a strong vessel by Jigen.

After reaching Phase 3 of his training, he is transported to a bigger place. On the way, there’s an accident and Kawaki escapes. Kara’s minions follow Kawaki to re-capture him, but Kawaki defeats them and is faced with Boruto and his friends. He misunderstands them as members of Kara and learns that Boruto, too, has a Kāma. This increases his suspicion of them. They both release their Kāma when faced with Garō. Kawaki gets exhausted and faints. He is taken to an advanced facility, after which, he tries to break out again but injures himself while fighting with the mystic animal, Nue. He runs to a nearby village, pursued by Sumire. Kawaki is cornered by officers and Naruto, the seventh Hokage. He faints again and wakes up in the company of Konoha Shinobis and the Hokage. He is left under Naruto’s supervision. Regardless of trying to escape Naruto multiple times, he fails and lives with the Uzumaki family.

ALSO READ: Will Boruto Surpass Naruto? This Is The Answer!

His Life With The Uzumaki Family

Boruto offers him a deal, to work together and remove their Kāma. He slowly lowers his walls toward the Uzumaki family and asks Naruto to teach him shadow techniques. During a friendly spar between Boruto and Kawaki, the boys, Naruto and Himawari are faced with Delta. During the fight, Kawaki sacrifices his arm to save Naruto and Himawari. Naruto provides him with a prosthetic arm, powered by Naruto’s Chakra. Kawaki decides to leave the village to protect everyone from Kara but is somehow convinced to stay after Boruto confronts him. Armado is captured and reveals his plan of killing Jigen, with Koji’s help. Kawaki learns that he is an imperfect vessel and collapses after his Kāma is triggered. Isshiki is desperate to finish the Kāma transfer and enters the village. Sasuke and Naruto confront him in his dimension along with Boruto.

Kawaki also gets pulled into the dimension in the middle of their fight, due to his prosthetic arm. Ishiki tortures Naruto and blackmails Kawaki to confront him. Kawaki agrees and fights him. Isshiki has the upper hand during the fight and Kawaki is seen struggling. He fools Isshiki with his shadow cloning technique and Ishiki dies. Naruto loses his nine tails for good and Maomoshiki takes control of Boruto’s body. She wants to use Kawaki’s Isshiki-trained body, to be an offering to cultivate the God tree. The group fights Momoshiki to revive Boruto and they leave the subspace with Boruto’s help.

Where To Watch Boruto: Naruto Next Generation?

Boruto: Naruto Next Generation is available on Crunchyroll, Hulu, Netflix. You can also rent or buy it on Amazon Prime.

ALSO READ: Does Kakashi Die In Naruto? Click To Know!