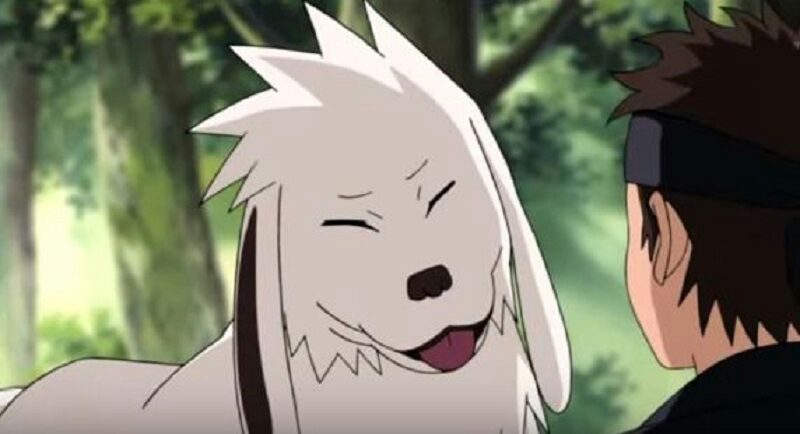 In the realm of anime most doggy deserves to be considered as prosocial like cats, dogs and cats are truly a blessing the bond between a dog/cat and humans is unforgettable, and those who are good to their pets will definitely appreciate this sentiment, anime has a list of dogs who perform a brave role in their series who are smarter and loyal, doggy does have care for their master is covered by the anime in their many series. A familiar relationship between dogs and the character is known to every anime fan lover and viewer. Here is the list of some of the dog heroes

Alexandar is dogy from anime full mental alchemist, he was a tucker family pet, alexander brings the jolt of warmth to the show, he was white-furred great pyrenes which were nines best buddy, Nina was prone to draw pictures of Alexender with herself, Nina and Alexender get closer when Nina’s dad scold her when she tied up Alexender. The mind-numbing and heartbreaking scene that was witnessed by all viewers in the year 2003 of these anime series still brings everyone to this day

Dog Akimura in the anime series Naruto, dog Akamaru is the constant companion to Kiba Inazuma, and it itself has a buddle of joy in the series, originally Akimura was bonded back to Kiba when he was in the university, as that pet was given to him by his mom, Akimura can sense the chakras of the body by using only his nose and nothing else this is the feather of Akimura. This help Kiba detect the strength of the enemies. Akimura and Kiba are some of the most forgettable bonds.

Doggy hen is from the anime series howls moving castle, Heen is a white and brown doggo is actually more ancient than he looks in present, he plays the role of spy for madam Suliman. He proves that he is a better off by simply being an errand runner, the canine was found by plenty of misunderstandings. His role in the anime is complex and crucial, he was a part of a good share of magical disguises and adventures. This all makes Heen a must-have dog.

Wanta in the dog from anime elfin lied, Wanta is smart as well as loyal viewers saw the emotional side of the dog when Wanta tried wading into the ocean after escaping his former owner who was mostly known for his abusive behaviour. The relationship between Wanta and Mayu is memorable and progressive. The little Wanta may appear adorable but he is fiercely protective of his loved ones

Tetsuya belongs to the anime Krokos basketball, he is referred to as two, Tetsuya has a two-white spot above his blue eyes are actually his eyebrows but he seems much cuter in it, he is blessed with sharp intelligence, the best is that he can dribble a basketball Tetsuya two has been part of as the changing moments of Krokos basketballs anime

Highschool of the dead anime has featured this dog in the series, the allice Maresa to found this dog name Zeke, and Zeke has protected this character in many possible ways, Zeke is the white dog with black ear flaps, this thing makes the dog stand out on his own right. His red collar with the red ornament hanging on it looks much cooler Zeke does a wonderful job of protecting and warning the ones he loved the most. Which makes him star in the series

Cowboy Bebop has featured Ein dog in this anime, Ein is a familiar breed, he was famous because he resemblance to a queen’s own pet. Ein plays an energetic role in cowboy bebop. He was so intelligent that his intelligence enhances to the extent that he was known as a data dog. As Ein cannot speak the thing makes it worthwhile to watch the interaction between Ein and the main characters. Ein has contributed much to the bebop gang. This is definitely a valuable addition to this list.

READ NEXT: 20 Anime Like Jujutsu Kaisen That Are Much Interesting!

Potato is the cutest of all stray dogs in the anime, his tendency was to follow kano wherever she goes, in the anime his one word also sounds so adorable, the bond between potato and kano is built through yukito who puppy this stole little doggy one day. It is interesting to see the bond between the main character kano and this cute dog. It belongs to the anime air.

Tarumaru is the dog from gokkun Gurashish, This dog made his appearance in only one chapter of the series Gikky Gurashi manga, but he left an indelible mark on fans, it was enough to earn him an extended character arc in this zombie anime, the character name Kurumi finds tarumaru in the mall and they grow a beautiful bond together, later he gets adopted by a club and becomes a mascot

One piece amines dog holy is a big yellow dog, the character in the anime trends to ride on him to either fight or sundry destinations, holy is the doggy in the anime who was known for a good deal in martial arts and also, he is extremely loyal to ohm, holy is just oversized, NO, he is not fat but oversized, the fan like these when he has his tongue lolling out as opposed to when his vicious is turned, holy is not highly intelligent even there was one time when holy even knocked himself out

Cassan amines dog friended is the closest companion to casher and the only robotic dog, the dog friended brings and integrates backstory with him, which further enriches the Cassan anime, friended is the black plated dog with intense yellow eyes has become a most favourite dog of fans, he is the most favourite due to his intelligence and intimidating appearance. He had helped jinn and the gang in key ways as well.

This dog character is from the anime Unbreakable machine-doll, the dog was Frey’s automat which must be confusing for this dog, but the dog took it all beautifully to his new state bandola, although he avoids looking and always used to detect Bronson, the dog Robi used to show always an expectational fondness for Frey, the fans assume from his black wolfy fur to his husky breed appearance, in the anime the rabi has yellow eyes which are transformed in red as the anime goes forward, in the new form rabi is bigger, much aggressive and uncontrollable to Frey, rabi could wield certain powers, rabi has a blast of sound waves which can help him to detect even the things which are not visible

Tatsu maki is the hardest working dog in the list of the biscotti republic. In the series, Tatsu maki the dog performs the role of seeking out the main character that is the hero of the series in another world and then bringing him back to flog nard. Tatsu maki was the part of the secret squad which was the affliction of the knight of biscotti this established the fact of his competence and worth, although he was accomplished and loyal, he has the biggest responsibilities where dogs in anime are concerned, he was entrusted with the summoning sword which belongs to biscotti in the dog days, along with noteworthy achievements he also bought cinque to flonyard.

Hiroyuki is a dog from the anime kimono Michi, he was a dog of a character name Genzo Shibata, he used to go everywhere with him, and he used to perform moves along with his master in the middle of ring fights in the story in the anime kimono Michi has become memorable for many reasons, one time when Hiroyuki and Genzo were transported to another word. Hiroyuki had ended up begging a never seen species there, these turn a target on a dog’s back which causes people to steal him. These anime reveals the bond between canines and humans and how both can do anything for each other

READ MORE: Top Anime similar to Erased you must watch

Genta is the dog character of anime named Rin: daughter of Mnemosyne, Genta is the large white ship dog an integral element of the entire ran series, Genta belongs to rim and Mimi, all three-character mentioned are immortal in the series, in most narrative alternative scenes the dog was seen with Mimi, especially when Mimi introduces herself as a Buddhist nun to find the rim, Genta was adored by Mimi rather than Rin. This enhances the trio dynamics, especially from the point of view of fans

The dog that seems most unique who was named Pochi, he has eerie white-circle eyes and form may at first unnerve some viewers as the purpose of Pochi in the series is how to keep mummy, Pochi was a fifty-year-old-year-old dog but does not seem like an aged dog he was like another dog, there are plenty of reasons of a fan for these anime that is her yellow colour to a good spectrum of expression when Pochi smacked her head on door in episode one fan have been enamoured with this cutie.

Dog mike is from the anime hunter x hunter, he was a frightened giant hound with Tyrian purple fur, in fact, he was actually quite misunderstood in this anime the wolfish doggy gives a performance unto himself, with paws seem like clawed hands everyone will be forgiven for the first time for run at sight of mike in the series the behaviour of mike is more machine then canine, mike is almost impossible to control and has the ability to memorize with person appearance and scent

MUST-READ: 25 Anime Like Gekkan Shoujo Nozaki Kun That You Must Watch!