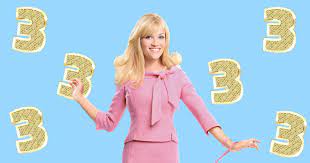 The third instalment of Legally Blonde is on the way! So prepare to “bend and snap” once more as Reese Witherspoon reprises her classic role as Elle Woods.

The pink-clad, Chihuahua-carrying sorority lady was originally introduced to moviegoers in 2001 when the first Legally Blonde film was released and became an instant hit. The comedy follows Elle after her lover, Warner Huntington III (Matthew Davis), rejected her for not being serious enough. She enrols at Harvard Law School, where Warner also attends, on a mission to win him back and show him wrong. The film was a big success, grossing over $141 million worldwide and cementing Reese’s status as one of the most popular actors of the decade.

Legally Blonde 2: Red, White & Blonde, released in 2003, sees Elle, now a trained lawyer, relocate to Washington, DC to lobby for animal rights and battle for Bruiser’s Law, which prohibits animal testing of cosmetics. Elle will be in her 40s in the third episode of the franchise. What has happened to the lawyer in the 20 years since the original? Is Emmett still her husband? Is she still the owner of a Chihuahua

Here’s all you need to know about the highly anticipated third instalment.

Originally, MGM claimed that Legally Blonde 3 would be released in May of this year, making it one of the must-see movies of 2022.

However, the picture has been postponed indefinitely, so we have no idea when we’ll get to see Elle Woods again.

Brown’s experiences as a blonde attending Stanford Law School while preoccupied with fashion and beauty, reading Elle magazine, and regularly clashing with the personalities of her peers inspired the plot of Legally Blonde. In the year 2000, Brown met producer Marc Platt, who helped her transform her manuscript into a novel. To turn the book into a film, Platt enlisted the help of screenwriters McCullah Lutz and Smith. Director Luketic, an Australian newbie who came to Hollywood after the success of his bizarre debut short film Titsiana Booberini, was drawn to the project.

Mindy remarked in an interview with Access Hollywood: “I’m excited to hear what people think of Elle Woods at 40 as written by us. It’s been a lot of fun to imagine Elle Woods at 40 compared to when she was 21.”

MGM executive Pamela Abdy was asked to divulge what she knew about Legally Blonde 3 in an interview with The Hollywood Reporter in November 2021.

“It’s actually taking place. Mindy Kaling and Dan [Goor] are now working on the script, which will star Reese [Witherspoon]. With Marc Platt, Reese and Lauren Neustadter are producing. We’re all working on it together. What does Elle Woods look like now that she’s 40 years old? Elle is a working mother with a successful job.”

We also know that Oscar winner Reese is a great proponent of giving women strong and empowering parts and that she has devoted a significant portion of her work with her own production company, Hello Sunshine, to this cause.

She was featured on the cover of Time magazine in 2021, acknowledging her good impact on the world.

It’s still a little of a mystery who will co-star with Reese. All of the cast members still had a lot of evident affection for the original film in the 20-year Legally Blonde reunion video, which you can watch below, which we hope means they’d be up for playing in Legally Blonde 3 if the screenplay permitted it?

Fans of the franchise will recall that in Legally Blonde 2, Elle married fellow lawyer Emmett Richmond (Luke Wilson). The actor has stated in the press that he would be interested in reprising his role.

In a video interview with The Hollywood Reporter, Reese also confirmed that Jennifer Coolidge will reprise her role as Paulette, along with other returning characters, though no identities have been revealed.

Fans of the franchise will recall that in Legally Blonde 2, Elle married fellow lawyer Emmett Richmond (Luke Wilson). The actor has stated in the press that if Reese asks him, he would be willing to reprise the part for the third time, so fingers crossed their marriage is still going strong!

We haven’t seen one yet, and we don’t expect to see one anytime soon due to the delay. When a trailer becomes available, we’ll be sure to include it in this guide.

Where To Watch Legally Blonde?

On the 20th anniversary of the film’s release, you may watch it on Netflix. You may follow Elle and Bruiser as they make their way to Harvard Law School. Elle takes Harvard by storm in a flutter of pink, Prada, and glitter, and they make some amazing new pals.