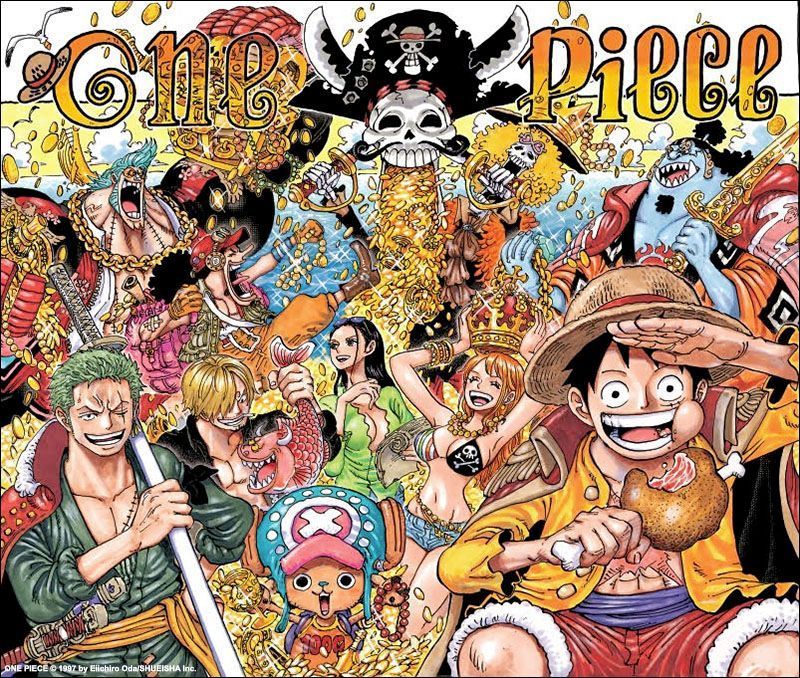 One Piece is one of the most entertaining and exciting anime one can find. Brilliant storyline, amazing characters, breathtaking adventures, full-on comedy and intense action scenes. Eiichiro Oda’s One Piece is the undefeated mega warrior in the anime world. Making its name in the big three, this anime is unknown to literally no anime fan. The story revolves around Monkey. D. Luffy (a pirate) and his crew in the adventure of finding the legendary treasure ‘One Piece’ in order to become the Pirate King. Along with his crew members Roronoa Zoro (swordsman), Sanji (cook), Chopper (doctor), Nico Robin (archaeologist), Usopp (sharpshooter), Nami (Navigator), Frankly (shipwright), Brook (musician) and Jinbei (helmsman) Luffy sets out to search for Gol.D.Roger’s (deceased pirate King) treasure. Roger’s last words before his execution were about the treasure which brought about the ‘Grand Age Of Pirates’ where every pirate’s dream was to own the treasure. Unlike every other pirate who is ruthless, wicked, manipulative and dreams of treasures to be wealthy and successful; Luffy being a 17-year-old boy dreams of adventure and wonder. Luffy only knows to move forward pushing his boundaries and defeating everyone who comes in between him and his dreams.

One Piece: What Is The One Piece Treasure?

One of the primary yet complicated mysteries of the anime is the treasure of One Piece. The anime is so secretive about the treasure that fans have started doubting its existence in the first place. It could be either something of great value in regards to wealth or it could be immense knowledge. Speculations about the treasure never end. Currently, the manga has progressed a lot but has given minimal hints about the treasure. The recent one being its location might be on Island ‘Laugh Tale’ as said in Chapter 967 of the manga.

To find One Piece one must find the four red Poneglyphs for which the Kozuki Clan comes to play. Kozuki Clan and the inhabitants of Ohara are the only ones who can decode the Poneglyphs but they were killed by the World Government. The World Government wanted to forbid anyone from discovering One Piece. Three red Poneglyphs have been found up to date belonging to the Minks in Zou, Big Mom and the Kaido. The location and information of the fourth red stone remain unknown but are highly believed to be with the World Government or on the moon. Oda has confirmed that the treasure is a physical reward with its nature still unknown. Its revelation is predicted to be shocking but as of now, everything is an absolute mystery. It seems like our curiosity won’t be cured anytime soon.

Joy Boy and the Rogger pirates are the only known humans to set foot on the Laugh Tale. Eiichiro Oda gave another hint to one of the anime’s greatest secrets, in Fisherman Island. Joy Boy visited Fisherman island and promised to bring the people living there to the surface. However, he didn’t fulfil his promise or probably couldn’t and is hence expected to come back. But the main point is Joy Boy is also one of the people who collected the greatest treasure and hid it on a mysterious Island. A theory suggested he wanted to bring it to the people of Fisherman Island to the surface and show them Laugh Tale to settle down. The theory also said that maybe the Fisherman race, sea monsters and other characters are waiting for Joy Boy to fulfil his promise. Luffy on the other hand promises to Shirahoshi saying he’d take her to the surface, protect and help Fisherman Island. By doing so he is fulfilling Joy Boy’s promise and is already carrying his will on the road to the mysterious land. This can also prove to be the key to the treasure.

Toei animation announced an extended hiatus of One Piece and Digimon after their studio was hacked 2 months ago. Toei Animation has produced over 1000 episodes for One Piece and maintains to secure the position of the anime with its consistent art style and interesting storyline.

Where To Watch One Piece?

You can stream One Piece on Netflix, Crunchyroll, Hulu and Funimation. Funimation and Crunchyroll have all One piece Content and quickly update as soon as something new is released. For some regions, you might need a VPN service to watch.

MUST-READ: Who Got Historia Pregnant In Attack On Titan?