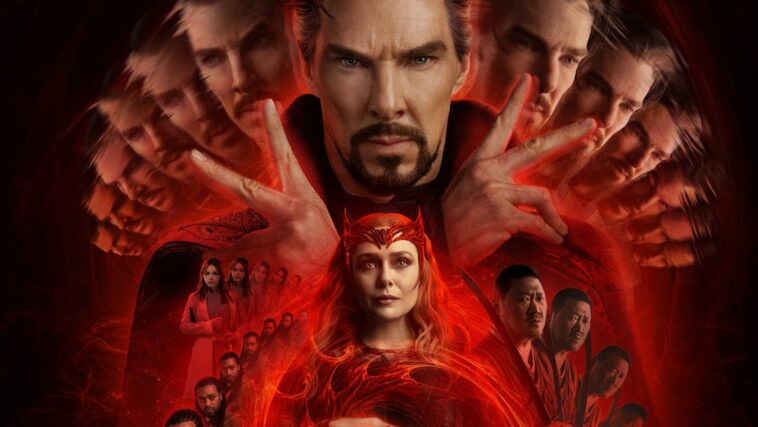 Are you a die heart fan of the super fanatic characters that are generally produced by certain comic books, Marvel being one of the most prominent of them, well you must be aware of the very famous character called Dr Strange, who is indeed one of the oldest and at the same time still popular character ever portrayed by the Marvel Comics? It had been enriched by an actor called  Peter Hooten for the very first time. But since 2016, it’s Benedict Cumberbatch took the responsibility for this character in audiovisual representation. One of the very recently released movies that have created a huge buzz among the fans who have been following the movies from the Marvel Cinematic Universe has been what is named to be the second sequel of Dr Strange or Doctor Strange in the Multiverse of Madness featuring one of the greatest names of Hollywood, Benedict Cumberbatch, who continues to keep his part as Dr Strange maintaining his flavour of this particular character. Looking into the entire movie one may see a third-eyed version of Doctor Strange who was found to be using his power in a rather negative way and hence the idea of evil Dr Strange has come to a realization. Well since the release of this movie, this version of the protagonist becoming the antagonist has been one of the most discussed topics all around the entertainment industry, with the questions like who is this evil Dr Strange? Let’s dig deep into this to know more and learn what was the origin of evil Dr. Strange or what exactly are the specific motives that he carries.

Who Is The Evil Dr Strange?

Doctor Stephen Strange has always been shown as a fictional superhero character appearing to be the Sorcerer Supreme, more precisely referred to as the primary protector of Earth against magical and mystical threats. This character was illustrated down to be its utmost perfection by Steve Ditko with the aid of  Stan Lee. Strange found himself making his first public appearance through  Strange Tales in 1963. It has been more than five decades now that the very new version of Dr Strange that have been making its way through the movie called Dr Strange 2: In The Multiverse Of Madness. The new alter-personality of Dr Strange has been the exact opposite of what we have seen earlier and hence is named to be the evil Dr Strange.

As the plot of the movie runs by, one may find out Dr Christine Palmer lost her life in a car accident and it was Strange who did his actual best to save her. Failing which, he started using his powers to revive her, he kept on using it to such a level that it became a threat to the people of his universe.

Although the main villain of the entire movie was referred to be Wanda Maximoff who was earlier pronounced as one of the eminent avengers called Scarlet Witch, who later turned into the negative shade and was found to stand against Dr Strange. But during the faceoff for the  Darkhold, Strange came to know about the fact that he can steal his version of the love of his life Dr Christine Palmer who lost brutally, and while he got engaged in doing that he end up producing a very dangerous variant of his own.

The evil Dr Strange with the creepy third eye of Agamoto was released, whose initial work was to provide Dr Stange clarity and extra power for good reason, ended up aiding the evil one, making him raise to his supremacy. All the movies featuring Dr Strange that we have seen before did sometimes did manifest the eye of Agamotto for the wellness of the universe but this time it signified to be the indication of Dr Strange being corrupted by the Darkhold.

Dr Strange 2: In The Multiverse Of Madness Story

The story of this brand new movie called Dr Strange 2: In The Multiverse Of Madness Story takes us all back to the root of the history of the Avengers who took the oath to save the universe from any chaotic situation along with Dr Strange himself. It did also take a turn in the personal life of Dr Strange and the way he turned from being just a physician to changing his life totally after he faced a drastic accident. It also depicts the death of his loved one and how desperate he was to bring her back that he even sacrificed of producing a corrupted variant who did badly for his universe. The story had certain ups and downs and twists depicting how Strange battled out with himself along with a huge number of foes to stick to the morals of saving the universe.

Dr Strange 2: In The Multiverse Of Madness Release Date

The official movie was found to make its debut premiere on the 2nd of May at the very famous Dolby Theatre in Hollywood, whereas it was released not only all over the US but also around the globe on the 6th of May.

Dr Strange 2: In The Multiverse Of Madness Cast

As always with every movie, this one was another great production of Marvel Studios, it was the Walt Disney Production that helped it to reach the public eyes. It has been undoubtedly an example of great work done by Sam Raimi as the director who is very famous for his previous horror movie works, which did leave an essence of a thriller in this movie as well.

The cast least of the most celebrated movie of today is enriched by some very popularly eminent personalities all around the globe. It does include Benedict Cumberbatch joining hands with Marvel yet another time coming back as the protagonist as well as the supreme antagonist of this movie with the character called Dr Stephen Strange who is popularly defined as A neurosurgeon who became a Master of the Mystic Arts after a car accident and does have a various number of his variant throughout his whole life, Elizabeth Olsen portrayed the role of Wanda Maximoff as well as Scarlet Witch, the major villain of this entire movie, a former Avenger who has now walked the opposite path with all her powers of harnessing chaos magic. Olsen was also been seen to portray the character’s Earth-838 counterpart, Chiwetel Ejiofor was seen in the shoes of  Karl Mordo who was defined in the movie to be the Sorcerer Supreme of Earth-838, an undeniably prominent member of the Illuminati who also happens to be the altered version of Dr Strange’s former mentor who later turned into his enemy.

READ NEXT: Is She-Hulk Stronger Than Hulk?

Moreover, Xochitl Gomez was seen as America Chavez, Michael Stuhlbarg depicted the role of  Nicodemus West, whereas the character of Dr Strange’s lover  Christine Palmer was given justice by Rachel McAdams, Patrick Stewart was found enacted as Professor Charles Xavier, Meera Syal was seen as Dr Patel, Katrina Durden portrayed the character of Blonde Zealot, Linda Louise Duan was seen as Tina Minoru, Scott Adkins was seen in the relevant characters as Lucian along with  Strong Zealot, Tilda Swinton was found to be in the shoes of The Ancient One, Mark Anthony Brighton was found to be Daniel Drumm, the role of Dr Nicodemus West was played by Michael Stuhlbarg. There were many more actors whose names may not have been mentioned in this list but their work does deserve a huge round of applause. We must not forget to appreciate every single member of the production crew who outdid themselves to make this movie a dream come true.

Dr Strange 2: In The Multiverse Of Madness Trailer

The trailer of the movie called Dr Strange 2: In The Multiverse Of Madness Trailer

Was released on the platform youtube under the official channel of Marvel Entertainment on the 22nd of December in the year 2021.

Where To Watch Dr Strange 2: In The Multiverse Of Madness?

The movie called Dr Strange 2: In The Multiverse Of Madness has made its theatre release only, so to date, it is available to be watched in one’s nearest possible movie theatre. No certain web platforms are signified yet for the OTT release of it, but we hope to get notified about it soon. The last movie of Doctor Strange (2016) is available to stream on Disney + Hotstar and we hope this one will follow in the footsteps of the prior.

MUST-READ: Which Are The Marvel Characters Copied From DC?