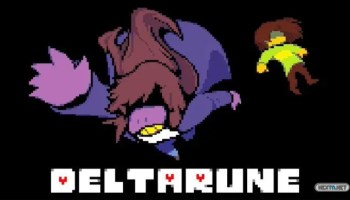 Who does not love playing video games? Whatever the age is, the people try their hands at this to escape from their reality and, to enjoy some time. The lovers of video games must know about Deltarune. Developed, written, and created by Toby Fox, Deltarune is a role-playing video game with a single mode. The game follows Kris and Susie, who is hired to save the world. Along with the duo, Ralsei, a Prince charming is also there.

The development of the Deltarune originally started in 2012 when Toby Fox had a dream in 2011 about a video game. He was determined to make a video game and, side by side, Fox was also planning to make something different and was also inspired by the playing card designs on Tumblr. Fox released Undertale 3 years before the release of Deltarune. Various factors, such as the graphics, combat system, sound, character representation, and many more made Deltarune a more challenging game than Undertale.

Chapter 1 of the game was released free on October 31, 2018. The makers released chapter 2 free on September 17, 2021, after seeing the impact and difficulties COVID 19 had put on the world. The fans of this video game are hoping and waiting for more chapters to come. As of now, the makers of the video game have not made clear when will the rest of the chapters will be launched. After seeing the gap between the prior two chapters, it can be concluded that the single release of chapters 3, 4, and 5 will be made available by 2023. It is to be noted down too that the upcoming chapters will not be available for free. Although the cost is not decided yet, it has been made clear to the fans that the cost will be lower than the cost of Undertale. Well, it’s all up to the fans, whether they can afford that price or not.

The game first revolves around Kris and Susie being teamed up for a school project. When going to the school supply closet, they eventually discovered a Dark World there, where they met with a kind-hearted but a monstrous dark Prince, Ralsei. They also met with a goofy bad guy, Lancer during their adventure. They all explore The Dark World and, Lancer helped them to overcome his cruel father, King. After returning from the place, Kris and Susie rest up only to discover that Kris has eaten up all the pie her mother had baked the day before.

In chapter 2, they again found a Dark World in the library and, this time met with Noelle and Berdly, and met with a queen in the Dark World. The important thing is that they both leave their soul behind and, Kris creates a Dark Fountain in the middle of the night with the knife. As there is no confirmed plot for the next chapters, there can be just guessing, suggesting that the next chapters can proceed further where it is left in chapter 2.

The main characters of the video game are Kris, Susie, an intimidating and a mysterious girl, Ralsei, who describes him as the prince and will command the gamer to use the act move instead of the attack move, King, the main antagonist who serves as the final boss with Lancer, son of the king who is the first enemy to the gamer.
Along with them, the gamers will also play Rouxls Kaard, Jevil who serves as the hidden Boss battle and the prisoner, Seam, the shopkeeper, Asriel, brother of Kris, Toriel, mother of Kris, and Asriel with Alphys, the teacher of Kris. In addition to these main ones, there are also other characters like the enemies and the townspeople.

Where To Play Deltarune Chapter 4?

The lovers of the video game can play Deltarune on different platforms. Chapter 1 is available on PC, macOS, Microsoft Windows, Nintendo Switch with PlayStation 4 but, chapter 2 is only available on PC and Mac. It is not decided yet on which platforms will the rest of the chapters will be launched but, it will be revealed soon.