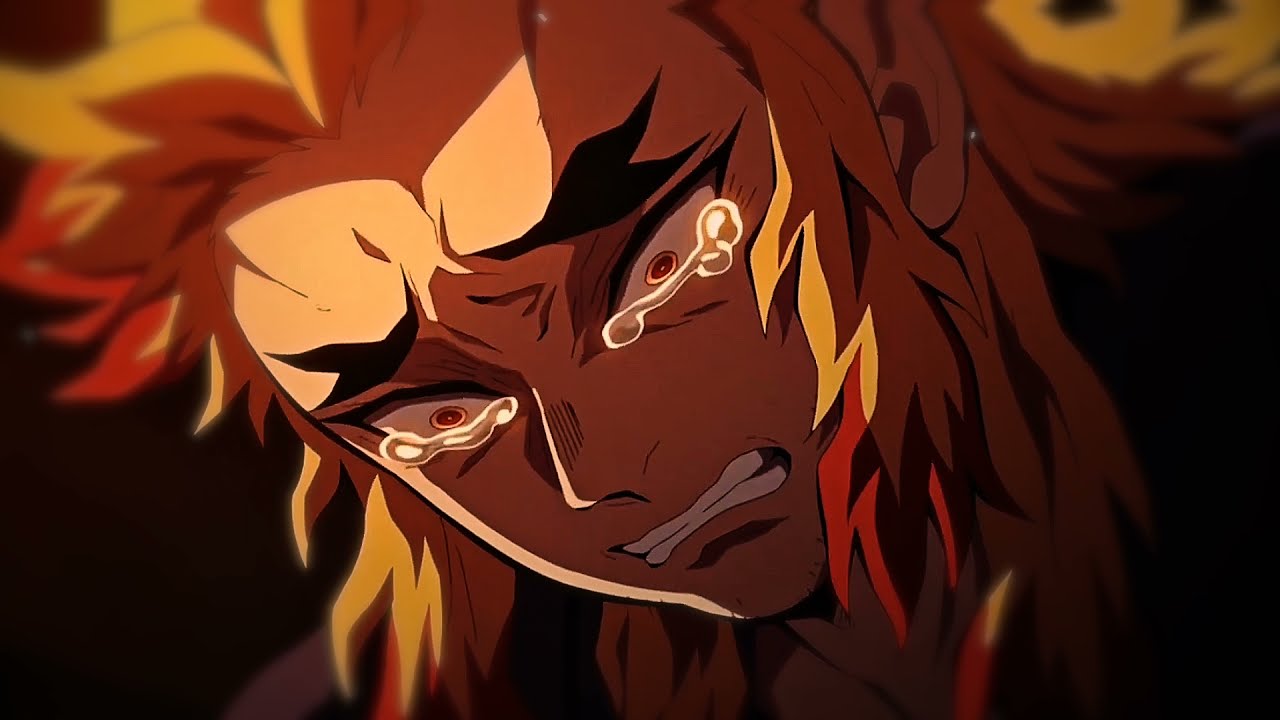 Demon Slayer: Kimetsu no Yaiba, also known as just Demon Slayer or KNY, is a manga series created, written and illustrated by Koyoharu Gotouge, and then serialized into an anime.

The series is set in Taisho era Japan and follows teenager Tanjiro Kamado who is determined to become a Demon Slayer as revenge for demons killing his family and turning his sister into a demon. At present, there are two seasons of the anime, with the first season containing 26 episodes airing in 2019 and the second containing 18 episodes airing between 2021 and 2022. The third season has been announced and will follow the Swordsmith Village arc from the manga.

The series has been greatly popular, garnering much critical acclaim and building a huge fanbase. It has also received multiple films, spin-offs, and light novels due to its popularity.

Shinjuro Rengoku, the father of Kyojuro and Senjuro Rengoku, was formerly a Flame Hashira in the Demon Slayer Corps. He looks extremely similar to his sons, with the iconic gold to red hair and angular striking brows.

Shinjuro has a short fuse, especially when it comes to the Demon Slayer Corps and his son, Kyojuro, and any mention of either makes him infuriated. During his fight with Tanjiro, he seems to be abusive, mocking the recently departed Kyojuro and knocking Senjuro to the ground. He also is an alcoholic; after being knocked out by Tanjiro, his first action is to go out and get alcohol, and he is frequently seen imbibing sake.

Shinjuro subsequently shows that, despite what he told Tanjiro, he actually cared about Kyojuro, and the recollection of Kyojuro drives Shinjuro to break down in tears.

Later in the series, he defends Kiriya and the rest of the Ubuyashiki family alongside Tengen Uzui, vowing to follow Kyojuro’s example and not bring shame to the Rengoku line.

While Shinjuro was a Flame Hashira, he was known as one of the strongest pillars in the Demon Slayer Corps. Yet he quit, and he did not teach his sons about the Flame Breathing techniques, with everything Kyojuro learned coming from a Flame Breathing guidebook. There are two causes to the changes in Shinjuro that ultimately led him to quit being a Flame Hashira, and even going so far as to tear apart the Generational Flame Hashira Record that had been passed down through the Rengoku family for decades.

The first is the death of his wife, Ruka Rengoku. Ruka, unlike Shinjuro, is gentle and kind. She’s depicted as being very wise, and as having strong morals and values. She teaches Kyojuro a lot about protecting people and using strength for the good of others. After giving birth to Senjuro, however, she is bedridden with an untreatable disease that eventually leads to her death.

After her death, the grieving Shinjuro begins drinking and develops a habit of alcoholism. He loses faith in his world, and his morale is at an all-time low. Although at this point he had lost his passion for fighting and swordsmanship, he had yet to quit. Then he reads a book on how Sun Breathing is the original and superior form of breathing, with all other types including Flame Breathing being subpar copies. This broke his already shaky foundation, and he quits. This is also why he believed Kyojuro wouldn’t amount to anything, and also explains the inferiority complex he displays when dealing with Tanjiro (who uses the Sun Breathing style).

After Kyojuro’s death, Shinjuro began mocking him and his abilities to Tanjiro’s face, leading to a fight between the two.

Over the course of the series, however, Shinjuro slowly starts rebuilding himself and recognises his faults and the mistakes he made, especially when it came to his sons. Following the Entertainment District arc, Shinjuro bursts into tears when receiving the final words of his son, Kyojuro. He revealed that despite his unfeeling and hurtful demeanour towards his sons, he had high hopes for them.

Shinjuro went on to write Tanjiro a letter in which he apologized and detailed all that had happened. He stated that he was very proud of Kyojuro, who had trained constantly and had learned the Flame Breathing by reading three volumes on the technique.

His repentance can be seen in his return as he kills the Snake Demon to protect Obanai Iguro, who he tries to reunite with his unnamed cousin.

The story of Demon Slayer: Kimtsu no Yaiba occurs in a world inspired by Taisho era Japan, with the modification that demons are present and a very real threat to the populace.

For generations, a hidden organization known as the Demon Slayer Corps has undertaken a secret war against demons. The demons are former humans who have been transformed into demons by Muzan injecting them with his own blood. They feed on humans and have superhuman skills such as extreme strength, “Blood Demon Art,” and regeneration. Demons can only be destroyed by decapitating them with weapons made of Sun Steel, injecting poison collected from Wisteria flowers, or exposing them to sunlight. The Demon Slayers, however, are completely human, but they use unique breathing techniques called “Breathing Styles” that give them superhuman strength and resistance. This helps them have a higher probability of defeating demons.

The plot surrounds the protagonist Tanjiro and his sister Nezuko. Tanjiro Kamado is a pleasant and intellectual teenager who lives in the mountains with his family. After his father died, he became the provider for his family, selling charcoal in the neighbouring village. When he returned home one day to find his family had been attacked and slain by a demon, everything changed. Tanjiro and his sister Nezuko were the only ones to survive the catastrophe, with Nezuko changing into a demon but still displaying human feelings and intellect. Tanjiro then meets a demon slayer named Giyū Tomioka, who recruits him to become a demon slayer.

Tanjiro Kamado is the main character of the show, a young boy seeking revenge for the death of his family and hoping to turn his little sister back from her curse of being a demon. He first learned the “Water Breathing” sword style from Sakonji Urokodaki, but later began to employ his family’s “Hinokami Kagura” (Dance of the Fire God) technique, which is based on the original breath-form, the “Sun Breathing,” integrating the two to produce a more sustainable fighting style. He is voiced by seiyuu Natsuki Hanae (Ken Kaneki in Tokyo Ghoul) in the original Japanese and Zach Aguilar (Aether in Genshin Impact) in English.

Nezuko Kamado, sister of Tanjiro, was turned into a demon and lost most of her humanity. However, she retained enough of her memories to keep her from killing Tanjiro. Urukodaki then hypnotises her for two years, leading Nezuko to view all humans as her kin and she will mercilessly kill any demon that threatens them. Nezuko gets her energy from sleep instead of eating human flesh, and she often falls comatose for long periods of time after overexerting herself. She can’t speak at first and has to wear a bamboo muzzle given to her by Giyuu Tomioka to prevent her from biting anyone. Nezuko possesses a variety of abilities, including regeneration, superhuman strength, the ability to grow and shrink quickly, and a blood demon technique known as “Exploding Blood,” which causes her blood to burn once it exits her body. Tanjiro usually transports her in a wooden box until she gets the ability to withstand sunshine. She is voiced by Akari Kito in Japanese and Abby Trott (Maya Fay in Phoenix Wright: Ace Attorney – Spirit of Justice) in English.

Zenitsu Agatsuma is a trainee that joined the Demon Slayer corps around the same time as Tanjiro and was trained in the Thunder Breath form by the former Thunder Hashira. However, he was not able to progress past the first technique in his training and belittles himself because of this. He is voiced by Hiro Shimono (Dabi in Boku no Hero Academia) and Alecks Le in English.

Inosuke Hashibira is a young boy who was raised by wild boars after his mother was murdered, and uses a self-taught breathing style known as Beast Breathing. He normally wears a boar head over his face, which is actually the head of his deceased boar mother. He is voiced by Yoshitsugu Matsuoka (Kirito from Sword Art Online) in Japanese and Bryce Papenbrook (Eren Jaeger in Attack on Titan) in the English Dub.

Kyojuro Rengoku is the current Flame Hashira in the Demon Slayer Corps, and viewed as eccentric but pure of heart, with very firm moral values. He is voiced by Satoshi Hino (Daichi Sawamura in Haikyuu!!) in Japanese and Mark Whitten in English.

Where To Watch Demon Slayer Online?

The three so far released seasons of Demon Slayer: Kimetsu no Yaiba are available on Netflix India, on all subscriptions be it the basic Rs. 149 mobile-only plan or the Premium Rs. 649 plan that provides Ultra 4k HD and streaming on up to 4 screens at the same time.

READ NEXT: Are Upper Demon Moon 6 Gyutaro And Daki Dead?