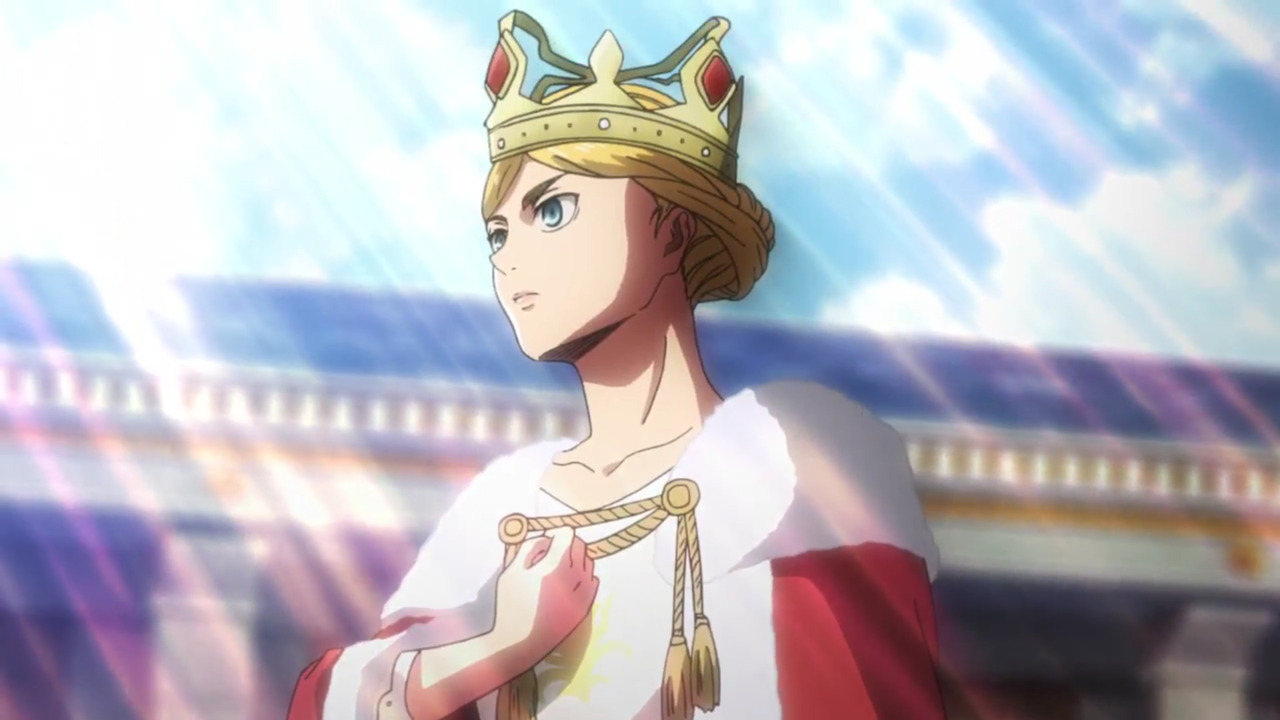 Originally introduced as Krista Lenz, Historia is, like every other character in Attack on Titan, very complex. When introduced, she is sweet, kind, and gentle, earning her the nicknames ‘angel’ and ‘goddess’. As the plot progresses, though, we find out Krista’s real name is Historia, and her personality is a lot more vacant, a lot less quick-to-please.

She grows a lot over the series, discovering her identity as the last remaining member of the royal Reiss family and taking her position as Queen.

She also develops a budding relationship with Ymir early in the series; though it never comes to fruition, this makes it all the more shocking when we meet Historia again to find her pregnant.

Who Got Historia Pregnant In Attack On Titan?

Canonically, the father of Historia’s child is a childhood bully of hers, who then goes on to redeem himself and apologize. His name is never mentioned, and he is simply referred to as ‘the farmer’, which is all his role amounts to.

Despite it not being established on screen, the relationship between Historia and the farmer is a real one. Not a necessarily deep or loving one, but a connection nonetheless. She even goes on to marry the farmer, despite his lack of status in comparison to her role as Queen.

The pregnancy, however, was neither borne of love nor an accident. It was a strategic move on Historia’s part, made for her survival. This is huge for her, especially when compared to the ‘Krista Lenz’ personality we were introduced to. ‘Krista’ often tried to find creative and martyr-like ways to die, to apologize for the burden she believed her existence caused and in the hopes that she would be remembered favourably after death. Historia, however, due to the influence of Ymir, wants to survive. She no longer hopes for death but actively takes steps to ensure that she stays alive, and tries her hardest to protect herself and her well-being.

Why Did Historia Choose To Get Pregnant?

In order to secure the safety of Paradis Island, there were three conditions that Historia had to agree to with the Hizuru ambassadors. First, Hizuru would increase the technological progression of Paradis Island. Secondly, Historia was to inherit the Beast Titan from Zeke Yeager, who had less than a year to live. This would shorten her lifespan to 13 years from the moment she inherited it. Finally, while in the possession of the Beast Titan, Historia was to have as many children as possible, to produce more royal blooded children to protect Paradis for the fifty years it would take the island to catch up with the rest of the world.

Zeke Yeager was planned to be fed to her immediately upon arrival on the island. But Historia had a plan; by becoming pregnant, she would delay the inheritance of the Beast Titan, at least temporarily. Additionally, Zeke himself had only a few months to live, giving her an opportunity of potentially never having to inherit the Beast Titan.

Could Eren Be The Real Father To Historia’s Child?

There are fan theories that the farmer isn’t the actual father of Historia’s child, and that it was Eren who impregnated her. There are a few reasons for this theory. Firstly, it is Eren who informs Historia that Zeke is going to be fed to him, not Yelena trying to lengthen Zeke’s life as the MPs assumed. Eren wanted Historia to either flee or fight back, as he did not want to see the cycle of children eating their parents continue. Secondly, in response to the information provided to her by Eren, Historia asks what effect a child would have on the plans of her inheriting the Beast Titan. Her proposing this to Eren made fans wonder whether it was him who impregnated her just to help protect her.

There are a few problems with this theory though. One, the main focus of the arc is the relationship between Eren and Mikasa. It seems unlikely that this would be the moment to have him impregnate another girl. Two, Eren has said before that he is very against creating children just for survival, and he isn’t the type to use children like that. Three, the farmer seems to believe that Historia is pregnant with his child too, and Paradis isn’t advanced enough for artificial insemination. It’s important to remember that Historia didn’t have sex for the pleasure of the act but explicitly to get pregnant and increase her lifespan. Thus, it wouldn’t make sense for her to have slept with both the farmer and Eren. Since he says it’s his child, this means the two of them must have slept together. Eren at this point does not have the full extent of his Founding Titan’s powers, and couldn’t manipulate everyone’s memories to believe it was the farmer’s child.

Another argument made is the misalignment between the time Historia said the pregnancy would take and the actual pregnancy period, which was much shorter. However, this is easily explained as Historia lying to the Military Police about the date of conception so that she could delay their preparations of feeding Zeke to her.

Ultimately, it seems extremely unlikely that Eren impregnated Historia both due to his values and the loopholes that would cause in canon.

Fans do have a point in considering this theory though. Despite it being explicitly stated that the nameless farmer is the father of Historia’s child, the positioning of panels makes it seem like this is a red herring and that there is a hidden truth. With the emphasis on Eren’s plan having begun ’10 months ago’, the same time Historia’s pregnancy occurred, to Historia mentioning the idea of a child only to Eren, it all seems to suggest that despite all rationality, Eren was the father. The farmer could have lied, acting on Historia’s behest to prevent the political issues that would arise from the child being Eren’s.

But if this is true, if Eren is the father… why? Eren has no desire to leave a legacy behind. He and Historia do not have a romantic relationship, and his connection with her isn’t like the innate, primal connection he shares with Mikasa and Armin.

There is one narrative purpose that this could have been written to fulfil. The final panel. Hajime Isayama, creator and mangaka of the Attack on Titan series, has already revealed what the final panel will be. It depicts the view of a person’s back, and they are holding a baby, with the baby’s head visible to the reader over the adult’s shoulder. The adult says one phrase to the baby: “You’re free…”

Perhaps there’s a chance that this child is the child of Historia and Eren. In that case, it would fulfil the role of Eren being able to do what the fathers before him haven’t – a secure and free childhood for their children. It would contrast him against Grisha Yeager, and though he would not be able to raise his child himself, he would have played a large role in securing the safety and freedom of the child.

This idea is perfectly achievable without involving Historia though. It would make more sense for the child to be of Eren’s and Mikasa’s, not only breaking the cycle of predatory parenting but also fulfilling the romance between the two that has been hinted at from the very beginning of the series.

This, however, is just one theory. Isayama has had nothing to say on the matter of either Historia’s pregnancy or the final panel of the manga so there’s no telling what the truth is yet. All that’s left to do is wait for it to release in its entirety, with the anime receiving the final part next year (which is also the 10th anniversary of the series as a whole).

The fourth and final season of Attack on Titan (also known as Shingeki no Kyojin) will be released in 3 parts, with the first part already available. Part 1 was released between December 7th, 2020, and March 29th, 202. Part 2 was released between January 10th, 2022, and April 4th, 2022. The final part, which will be the end of the series, will be released sometime in 2023. Studio Mappa, the studio in charge of producing and animating the show, has titled the final part ‘Attack on Titan: The Final Arc’. In fact, while the previous seasons are all referred to as by their numbers (Season 1, Season 2, and Season 3), Season 4 has generally been called ‘The Final Season’ instead, possibly because of it being divided into parts. With ‘The Final Season Part 1’ and ‘The Final Season Part 2’ out, all that’s left is to wait for ‘The Final Season: The Final Arc’.

READ NEXT: Itachi Vs Madara: Who is Stronger?