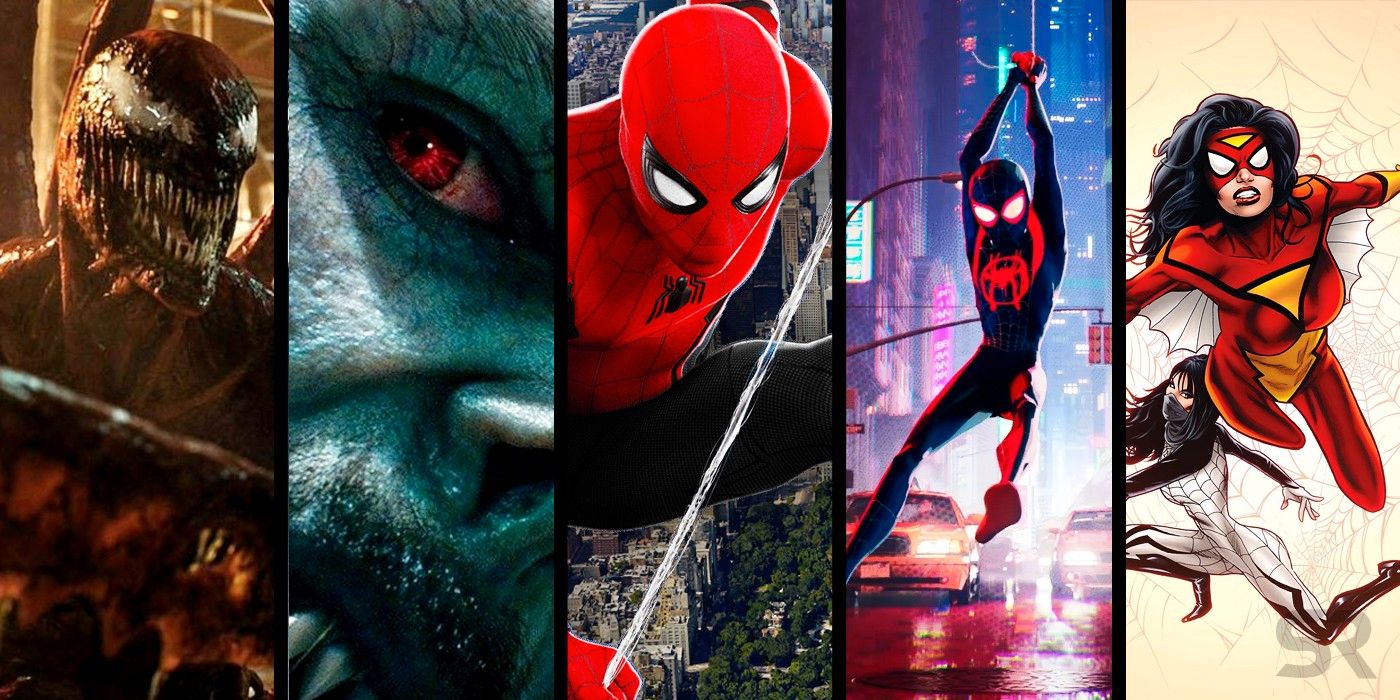 Due to the path-breaking success of Marvel movies over the past decade, it is needless to say that the Marvel Cinematic Universe has easily made its place in the Mainstream American Pop Culture. To say that fans are crazy about Marvel Movies would be an understatement. Many media studios have furthered their hand to Marvel with deal-making intentions over the years. One of which is Sony. Long before the superhero universe took a storm, Sony struck a deal with Marvel to own the movie rights to the Spider-man universe. Today, Sony owns more than 900 Spider-man characters and films in association with Marvel Entertainment. To list all of them is a rather enormous task, however, here’s a list of 15 Marvel Characters owned by Sony. Take a look!

When we talk about the Spider-man Universe, Peter Parker is the first name that pops up. One of the most popular (and lead) characters in the Superhero world is Peter Parker a.k.a Spider-man!

Peter is a poor teenager and orphan who gets superpowers after being bitten by a radioactive spider. He gets strength, speed, and the power to cling to walls, all of which turn him into a Spider-man. Sony currently owns the rights to all of the spider-man movies including Spider-man: No Way Home and Spider-man: Far From Home.

Another incredibly popular character appearing in the Marvel comics is Venom. Having an alien-like appearance, he survives by bonding with a host which is usually a human. This character was first introduced in the 1988 film Amazing Spider-man and has been owned by Sony ever since. Being the anti-hero character in the spider-man franchise, the makers also developed a film centred around this character in 2018.

Felicia Hardy, known as the Black Cat is the daughter of a world-renowned cat burglar. One of the most famous characters in the spider universe, she gained her powers after going through a traumatic incident. After training herself in various acrobatics, she decided to follow her father’s footsteps and adopted the identity of the Black Cat. She was initially depicted as a supervillain in the movies but was also seen being the love interest and later, an ally of the superhero Spider-man.

The Sinister Six refers to a group of supervillains that appear in mostly all Spider-man films. It includes a list of enemies, namely – Doctor Octopus, Vulture, Sandman, Electro, Mysterio, and Kraven the Hunter. These were the annual team members in the 1964 film The Amazing Spider-man Annual. The Sinister Six has appeared in multiple Marvel adaptations and is set to be centred in a film, as part of Sony’s Spider-man Universe.

Jessica Drew, known as Spider-woman is easily one of the most unique characters in the history of the greatest spider-man characters. She first appeared in Marvel Spotlight and later in a self-titled ongoing series called Spider-woman. This character’s story originates from the time that she was a brainwashed Spy. We see that Jessica gets killed in one of the spider movies but is later resurrected. However, her character fell to disuse and we saw other characters being supplanted by the same name in the franchise.

Silk, as a character, is no different than our Original Superhero Spider-man. She has got all the powers, strength, speed, durability, and endurance that he has. She is an easy inclusion in Sony’s Spider-man Universe as she can create webs with her fingers and can cling to any surface. Silk first appeared as a cameo character in 2014s first The Amazing Spider-man. However, she rose to fame only during her first run and crossover event called Original Sin. After which, she received her first solo series and is now set to appear in the upcoming movie Into The Spider-verse 2.

The Goblins are an alias of several supervillains appearing in the Marvel universe. One of the best-known goblins is Norman Osborn. Norman, arguably the best rival in the franchise, is a Halloween-themed goblin having a monster-like appearance with weapons that resemble bats and ghosts. He, along with other goblins has appeared in various media adaptations, Films, TV Animated shows, and Comics. However, we have seen different actors portray their roles in each of the Spider-man Films.

Madame Web, whose real name happens to be Cassandra Web is another intriguing character in the spider-verse. A Clairvoyant Blind Woman, connected to a life-support system, we see her first appearing as an ally who helps Spider-man find a kidnapped Victim. As owned by Sony, she’s appeared in many Sony Spider-verse movies though portrayed by different actors. Dakota Johnson will be seen playing this incredible character in the upcoming Spider-man film.

NEXT-READ: Will Venom And Morbius Come Together?

After Peter Parker, one of the widely loved versions of Spider-man has to be Miles Morales. He became so popular in the Sony Spider-verse that by 2018 he starred in a self-titled movie Spider-man: Into the Spider-verse. He is said to be so good that tomorrow if the makers decide on replacing Peter with him, fans would easily accept him as the OG Spider-man.

Known for his long-standing grudge against Spider-man, J.Jonah Jameson is an important character in the Spider Franchise. He is shown as the editor-in-chief and Peter Parker’s Employer who employs him as a photographer. Jonah’s Character made its first appearance in The Amazing Spider-man in 1963 and since then he is known for his screeching voice and strong hatred for Spider-man.

Due to its anti-hero qualities, this character easily became popular in the Marvel Universe.

One of the most pivotal characters in the Spider-man Franchise is Uncle Ben. His tragic death is what caused Peter to get motivated into becoming a Spider-man. He teaches Peter one of the most important lessons in his life: “With Great Power comes Great Responsibility”. A majority of fans adored Uncle Ben for his wisdom and sweet nature amongst Rivalry. Uncle Ben’s Death is one of the few unreversed deaths in the franchise.

Along with Uncle Ben, another very influential character in Peter Parker’s life is Aunt May. She is one of the best-known supporting characters in the Franchise and is adored by all the Spider fans. Her character is like a mother figure to Peter as after his parent’s death, she takes care of the Young Hero and continues to be his support even after the death of his husband. Uncle Ben and Aunt May are two of the significant characters in Sony’s Spider-verse.

Making it to the anti-hero list is another spider-verse character Flash Thompson. He is a football player known for bullying Peter Parker throughout his High school years. However, later we see both of them becoming friends after he becomes aware of Peter’s Identity. Flash’s character bonds with the Venom symbiote after losing his legs and goes on to become a superhero Agent Venom in the franchise.

Mary Jane Watson is one of Peter’s most prominent long-term love interests. Her character was created by Stan Lee as a beautiful green-eyed and redhead girl who competes with other female characters to win Peter’s affection. She first appeared in The Amazing Spider-man #25 but her real debut was in The Amazing Spider-man #42 where she rose to fame with her iconic line, “Face it, Tiger…you just hit the Jackpot!” We also see her become Peter’s wife later in the Franchise. As a character that is closely associated with Peter, she is easily one of the most significant characters in the Sony Spider-verse.

Gwendolyne Maxine Stacy is a student who attended college along with Peter Parker and soon became his first Love interest. But later, she was killed by the Green Goblin. He threw her off a bridge leading to Peter’s loss. He was haunted by her death and a lot of articles that were published later say that Stacy still holds a very special place in Peter’s heart. Stacy’s character easily rose to fame but fans were disappointed with the fact that she was killed so early in the franchise. Bryce Dallas Howard portrayed Stacy in Spider-man 3 and later Emma Stone replaced her in The Amazing Spider-man Series.

And with that, we have come to the end of this list. These were 15 out of the numerous popular characters owned by Sony. Sony’s Spider-verse is slowly expanding with newer films and series. It is currently developing several live-action movies and is scheduling release dates for the same. Taking the recent release of Spider-man: No Way Home, which turned out to be the highest-grossing film in the Spider-universe, there are chances that Sony would like to have this ownership for years to come without sharing it with any other media studios.