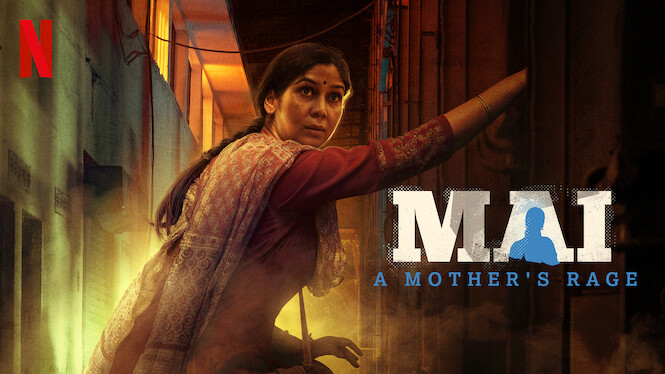 A woman-oriented Bollywood piece of entertainment with an outstanding depiction of a thriller, Mai: A Mother’s Rage, a NetFlix original that has successfully framed the story of a mother in more of a very strong and disastrous way besides being nourishing. The story revolves around a mid-aged  47-year-old woman named Sheel who lost her daughter in a terrific incident, after which she took an oath to punish the inhuman hand behind her tragic fatality. Hence, she intended and ended up committing the crime of murdering a criminal who she assumed to be the reason for her daughter’s death. This show features Sakshi Tanwar who was framed into the character of one of the prominent women in the history of Hindi cinemas.

The industry of entertainment, around the world, has always shown many sides of female characters voicing out their rages. There have been many movies where one finds a strong mother, strong daughter, strong wife, strong sister, and the ultimate strong woman herself. Well, there have been a lot of series that tell us the stories of such a strong female character or the courage that she went through in surpassing such thrilling circumstances. To be precise, Mai turns out to be a thriller and family drama and there are many other shows that you may like if you like this Netflix Original called Mai: A Mother’s Rage. So, without further ado, let’s find out the list of such shows.

This seems to be the most similar piece of entertainment to Mai as they both share a co-related name although it is also entitled ‘The Road Trip’, but this can more be referred to as a television film rather than a Tv Series. This movie was directed by Oren Kaplan and featured Lori Loughlin as Rebecca Mayer who was the mother to Conner Mayer portrayed by Jordan Hinson, who was on her way t her first class in college but instead of having a fun time, was chased by a carjacker on the road, the story relieves how Rebecca saved her daughter and herself in that critical circumstance.

Where to Watch A Mother’s Rage?

This show is available to stream on the Digital platform called  Netflix as it is labeled as a Netflix Originals.

3 % can be named as the is a Brazilian dystopian thriller that was shaped into a television series by  Pedro Aguilera. It was originally made in the Portuguese language, featuring several eminent faces like  João Miguel and Bianca Comparato as two of the main characters. The plot is said to be set in an unspecific future era, where every 20-year-old individuals of this place which is referred to as  “Inland” have the once-in-a-lifetime opportunity to complete The Process and hence advance to the affluence of the distant society which is addressed as Offshore. It had a total number of 4 seasons with 33 whole episodes including a pilot one.

This show is available to stream on the Digital platform called Netflix as it is labeled as the first-ever Portuguese Netflix Originals.

The series called The Shinner can be defined as an American police procedural anthology television series that was framed to be an actual series by  Derek Simonds and was named after the novel of Petra Hammesfahr. It revolves around the explorations of the detective Harry Ambrose, who throughout all the four seasons of 8 episodes each, were found to chase around certain criminals all around the USA, and even when he was retired, certain fatal cases made him rejoin the investigation.

Where to Watch The Shiner?

This show is available to stream on the Digital platform called Netflix as it is labelled as a Netflix Originals. It was also released on USA Networks.

Another example of good drama is Laakhon Mein Ek, an Indian streaming television series that was created by Biswa Kalyan Rath and had two whole seasons comprising of 7 episodes each. The story revolves around a teenage student from Raipur named Akash portrayed by Ritwik Sahore, a boy who wants to be a Social media sensation by making mimicry videos but is forced by his father to go for coaching to join the IIT. With the lack of interest, he fails to excel there and continues with his struggles to fulfil his father’s dream.

Where to Watch Laakhon Mein Ek?

This show is labelled to be a Netflix Originals and hence is available on the OTT platform  Netflix.

One of the very popular American crime drama streaming television series, that was created by Bill Dubuque and Mark Williams is what we came to know as the Ozark. The storyline tends to follow a married couple namely Martin Byrde or Marty and Wendy Byrde-Davis depicted by Jason Bateman and Laura Linney respectively, who moved their family of four to the  Lake of the Ozarks in order to launder money, but circumstances start showing them the bad days and the show tells us hoe they end up surviving throughout the 44 episodes in 4 whole seasons.

Where to Watch Ozark?

This show is available to stream on the Web Entertainment platform called Netflix as it is labeled as a Netflix Originals.

One of the most famous German science fiction thrillers, which was framed into a Television Series by  Baran bo Odar and Jantje Friese, tends to revolve around the fictional German town of Winden where the children were found getting missing day by day. Originally made in the German language and later dubbed into English, this series comprised a royal of 3 seasons with 26 fully run and loved episodes. The story also took us the time travel to1956-83 Germany and made this show undoubtedly one of a kind.

Where to Watch Dark?

This show is available to stream on the Web Entertainment platform called Netflix as it is labeled as a Netflix Originals.

ALSO READ: 12 Shows Like The Fame Game That Are Interesting!

One of the British spy thriller television series, that reigned over the hearts of millions of people with its storyline where  Eve Polastri, a British investigator portrayed by Sandra Miju Oh was assigned the voracious task of capturing a psychopathic assassin called Villanelle. The whole show was the journey of chasing the mighty monster This show is based on the novel series called the Villanelle by Luke Jennings and had female head writers like  Phoebe Waller-Bridge, Emerald Fennell, Suzanne Heathcote, Laura Neal throughout the all four seasons comprising 32 episodes in total.

Where to Watch Killing Eve?

This show is available to stream on the Web Entertainment platform called Hulu.

One of the eminent British noir psychological and supernatural thrillers that were framed into a  web series by  Steve Lightfoot, is said to be based on the novel called Behind Her Eyes by Sarah Pinborough. It has been one of the most celebrated series with a successful amount of 6 episodes in one season. The plot is seen to follow the life of a single mother called Louise who tends to see her worst days coming when she started having affair with her boss and risked of creating a love triangle with him, his wife, and herself, which resulted in a huge fatality of her life.

Where to Watch Behind Her Eyes?

This show is labelled to be a Netflix Originals and hence is available on the OTT Platform  Netflix.

One of the very prominent American science fiction psychological thriller Television shows that was developed by Dan Erickson, featured famous personalities like Adam Scott who portrayed the character of Mark Scout, Zach Cherry depicted as  Dylan George, and many more who worked together in the Lumon Industries which uses severance to be one of the procedures of non-work memory of some of their employers and an employee named Mark who was also a part of it actually went on and hence discovers the conspiracy in between them

Where To Watch Severance?

This show is available to be watched on the OTT platform called Amazon prime and Apple Tv+.

One of the most popular American thriller and drama genres of television series was enriched by the show called Pieces of Her which was created by Charlotte Stoudt. It has been still running with pride and joy having a whole season of 8 episodes yet and has been addressed as Netflix’s top 10s. The story of this series is actually an adaptation f a novel called Pieces Of Her by Karin Slaughter and revolves around a 30 years old woman Andy Oliver depicted by Bella Heathcote got caught in a deadly mass shooting in a native diner, escaping from where she came to know many unknown things about her family and her mother’s past.

Where to Watch Pieces of Her?

This show is labelled to be a Netflix Originals and hence is available on the OTT Platform Netflix.

MUST-READ: 12 Shows Like Deadly Class That’s Worth Giving A Watch!