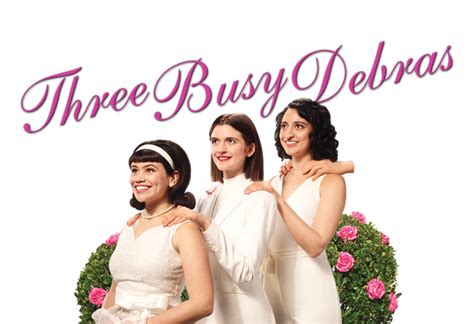 It’s funny. It’s weird. It’s everything you expect an [adult swim] show to be. Three Busy Debras is back!

The show is created by, written by, and stars Sandy Honig, Alyssa Stonoha, and Mitra Jouhari. They created as a play before adapting it for TV, where it was picked up by Adult Swim with executive producers Amy Poehler (best known as Leslie Knope in Parks and Recreation) and Kim Lessing of Paper Kite Productions.

The show first premiered on March 30, 2020, on Adult Swim, Cartoon Network’s adult-oriented late-night programming block, and was soon made available on HBO Max. It received a second season on April 24, 2020.

Three Busy Debras is currently running its second season, with one episode being released a week on Adult Swim and then uploaded to HBO Max on the following day. There’s still no word as to whether there will be a third season but it’s more than likely; adult swim shows tend to be long-running, and TBD has the kind of format that allows a long run since it doesn’t follow any ‘main’ plot but is more about situational comedy.

The second season began its run on April 24th, 2022 and is currently released on a schedule of two episodes a week. There is still no information about the number of episodes it is expected to have.

The gap between season 1 and season 2 was two years, so if season 3 follows the same schedule, it should begin airing sometime in 2024.

The show takes place in the fictional town of Lemoncurd, and follows the lives of three women all named Debra. The Debras all seem like stereotypical housewives at first glance but they and the world they live in following no sense of social convention or logic. The faucets don’t pour out the water, but milk. The people are overly enthusiastic not about football or basketball, but the cartwheel club. The most objectionable thing about killing a man is the mess it makes, and the legal response is to tie the murderer’s reproductive tubes.

The show is founded on absurdist humour, and every episode is weirder than the previous one. It’s an incredibly fun, entertaining craziness that’s unlike anything else. The first episode starts with two of the Debras killing the pool boy of the third Debra, and they must hide the body lest their tubes are tied as punishment for creating a mess. In the second episode, the three Debras try out for the Lemoncurd-famous Cartwheel Club and only two get in, leading to the Debra that was left out to sabotage them out of jealousy. In the third episode, the Debras have a sleepover; in the fourth, Debra’s sister Barbra meets and befriends the Debras. The fifth episode sees a ‘naturally occurring ATM machine glitch and begins dispensing free money, which makes the population of Lemoncurd very happy; except for the Debras, who don’t want to lose their elitism. The season finale has the Debra’s swapping professions in their annual ‘Debspringa’ (inspired by Rumspringa, an Amish rite of passage meant to help guide the adolescents in choosing their careers and future).

Three Busy Debras is a passion project by Sandy Honig, Alyssa Stonoha, and Mitra Jouhari, and in addition of creating the concept and writing the script, the three of them play the starring roles of Debra, Debra, and Debra. Additionally, Catherine Cohen performs the off-screen narration, as heard in the trailer.

The entirety of season 1 was directed by Anna Dokoza, but the second season seems to be branching out, with Maegan Houang and Kati Skelton directing the episodes instead.

Three Busy Debras is an Adult Swim production and premieres every episode on it. Adult Swim is Cartoon Network’s late-night streaming block in the U.S. In India, Adult Swim shows used to be accessed through WB Channel by Warner Bros; however, WB Channel was forced to shut down due to a lack of viewership.

Three Busy Debras can be watched on the Adult Swim website but requires a connection with a U.S. cable provider. The alternative is to watch the show on HBO Max, where Three Busy Debras episodes are uploaded the day after they premier on Adult Swim. Unfortunately, HBO Max is also not functional on devices with their location displaying India