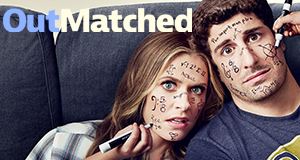 Produced by Briskets Big Yellow House, 20th Century Fox Television, and Fox Entertainment, Outmatched is an American multi-camera family sitcom from the mind of Lon Zimmet. He is also credited with writing the show. The show premiered on 23 January 2020 on Fox. This sitcom currently has 1 complete season consisting of 10 episodes. Each episode has a runtime of about 22 minutes, give or take.

Unfortunate news for the fans of the show as Outmatched was canceled after its season 1 finale. Fox decided not to proceed with a second season, and to date, that decision remains unchanged, and no other network has picked it up either. The viewership being low was one of the reasons this show did not continue.

The premise for season 2 was there. In the season 1 finale, the couple had discovered that their youngest was also a genius of sorts. Season 2 could have explored more about this and how they proceed as they now have 4 geniuses to care for. Shows like this can weave a decent storyline but the main catch and crowd-puller has to be the comedy material. If they do not set themselves apart in terms of unique humor based on the premise of the show and realistic characters, it is tough to have a large audience.

The show is centered around a family of 6 from Atlantic City. The father, Mike, is a blue-collar home contractor, and the mother, Kay, is a pit boss at a local casino. The couple has 4 children, and the older three are considered ‘geniuses’ due to possessing a very high IQ. The pilot episode kind of sets this scene and introduces the characters and the backdrop of their lives. In episode 2, Mike and Kay give their children ‘the talk’, which leaves the older two, Brian and Nichole, wondering if they are very behind for not having had their first kiss yet. Mike and Kay also begin to ponder some things about their relationship after giving the talk. This leads them to approach their friends Rita and Irwin for advice. Things do not go smoothly in episode 3 when the kids’ grandparents come to visit. Jay and Sylvia, who are Mike’s parents, come to visit from Florida.

During their time here, both the parents are made to feel insecure when Jay criticizes Mike’s way of parenting and Sylvia begins to bond very closely with Nicole. In episode 4, Kay convinces Mike to be the bearer of bad news by telling their kids that their idea to move to a new house is not going to happen. Mike then has to face the repercussions of announcing this news to his kids. The topic of dating is the theme for episode 5 as Mike tries to understand Marc and his crush while Kay takes action to make sure Nicole is not hurt by her date, who Kay feels is not suited for a proper relationship. In episode 6, the couple looks for a new school for Marc after he gets in trouble with a teacher, and in episode 7, the duo tries to teach Nicole the ways to handle failure. Episodes 8 and 9 are slower and show the couple as they try to make new friends with other parents and are then sent on a date by the kids as the basement is being renovated.

The finale is mainly about the youngest, Leila’s, birthday party. A cover-up with Leila’s birthdate is discovered and then a combo theme is decided for the party. While Rita and Irwin postulate what it would entail being the kids’ guardians in the worst-case scenarios. Ultimately, When everyone is busy, Leila reveals to Irwin that she is a genius due to her artistic ability.

The main cast of this sitcom includes Jason Biggs as Mike, Maggie Lawson as Kay, Ashley Boettcher as Nicole, Connor Kalopsis as Brian, Jack Stanton as Marc, Oakley Bull as Leila, Finesse Mitchell as Irwin, and Tisha Campbell as Rita.

Where To Watch Outmatched?

Season 1 of Outmatched is available to stream on Hotstar and Prime Video, though the latter is only available in certain locations.