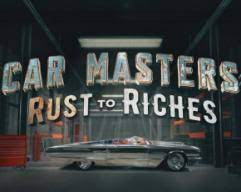 Car Masters: Rust to Riches is an American reality TV series about cars and trucks that premiered on 14 September 2018. It is produced by the company Mak Pictures. The show currently has 3 seasons and 24 episodes in total. The episodes have a runtime of about 40 minutes each.

The long list of executive producers that were involved in the making of this series includes Rob Hammersley, Will Ehbrecht, Michael Lutz, Mark Kadin, Scott Popjes, Hugh Peterson, and John Stokel.

The show focuses on a team of professionals who upgrade, restore and renew cars to increase their value and sell them for a profit.

An official announcement for a renewal is yet to be made by the producers. However, seeing as the reality series is quite popular, they will more than likely continue with the fourth season. Information regarding this may be announced sometime this year.

Reality Tv never has problems in terms of material for the show. Since what the team does in their everyday life, there will be plenty to cover in season 4. The overall theme and premise of the show will remain the same as it is enjoyable to the audience. There will probably be better, faster, and cooler new cars, trucks, and restorations in the next season. The fourth season could even cover how they have improved in their craft as a team and as individuals and how much their business has grown.

Mark Towle is the owner of Gotham Garage, a professional restoration spot in Temecula, California. The team at Gotham Garage has been obtaining old and classic cars and giving them the latest updates and finishes to sell them for a profit. By season 3, the team not only restores old cars but starts receiving orders for customized builds thanks to some popularity they gained previously through a vehicle that they worked on and donated to an automotive museum of sorts. These new requests start coming in from episode one itself, but they continue to restore and trade-up old cars as they did before. In episode 1, the crew must customize and upgrade a 1933 Ford replica while also turning an old Mercedes into a drift car as part of a trade-up deal. Episode 2 sees the team receive a new order for modernizing an El Camino. They have also traded up the old Mercedes for a Scout II, which must be modified for another trade deal. In the next episode, one of the guys does a special job of restoring a burnt-looking motorcycle for a family member of his.

In episode 4, the guys try to make a deal with the Ford Woodie obtained by trading in the Scout II for some cash and some cars to equalize the value. They end up with a ‘54 Bel-Air, a Prius, and most importantly a minibus as a gift for team member Caveman, who only recently received his diploma. The crew runs into some obstacles in episode 5 as they try to make the Bel Air that was customized into a ‘Hot Tub Car’ run smoothly, so it can be featured in a commercial for a motel owned by their friends. Next, the team attempts to turn an Impala into a lowrider type of car, but not all their ideas go as planned. By episode 7, a deal is made to sell the Impala low rider and the crew tries to touch up the Prius in hopes of making a deal for a Hayabusa, which they want to pair together with a concept car.  In the finale, the team must get creative with an online auction to earn their pay when social distancing rules come into play.

Where To Watch Car Masters: Rust To Riches?

The first 3 seasons of this show are available to stream on Netflix.