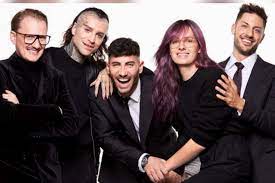 Produced by ITV Studios Germany, Queer Eye Germany is a makeover reality-TV series and the official spinoff to the 2018 show Queer Eye. The original show has six seasons and the spinoff currently has only 1. Queer Eye Germany premiered on March 9, 2022, on Netflix. The language of the spinoff series is German and it is filmed in Germany.

This series follows a new and exciting ‘Fab Five’, a group of individuals who are experts in their respective fields, as they help better the lives of people. Season 1 of Queer Eye Germany has 5 episodes, each with a runtime of about 49 minutes.

This reality-TV series is doing well all over the globe due to its heartwarming touch. It currently has a rating of 7.5 out of 10 on IMDb and its popularity is climbing very quickly as well. That being said, the show is yet to be renewed for a second season. The chances are really good due to its reception by the audience. The announcement may take some time though, seeing as the first season itself was released only recently.

If renewed for a second season, the story will follow a similar theme, which is a significant part of the show’s success. There seems to be no reason for the second season to go in a different direction, although the addition of new side characters can be taken into consideration so as to add more interesting personalities to the show. The first season also has only 5 episodes, so they will be able to find plenty of new people who would benefit from their makeovers, each with their own unique story.

The season opens with the introduction of the ‘Fab Five’, a group who are expert in its own fields including interior design, health and nutrition, hair and makeup, life advice, and fashion. In each episode, they take on a new ‘hero’ to who they give a complete makeover and advice. These individuals are nominated by family and friends who think they deserve it due to their dedication and hard work in everyday life.

The Fab Five then get to have a quick look at the chosen ‘hero’ via a recorded video on their way to that individual’s house. They meet the ‘hero’ along with any family they have and begin to get to know each other. Through the course of the episode, the Fab Five each take their turn to work on the individual in their respective areas of expertise and completely change them at the end of it. Their primary goal is to help that particular individual accomplish what they have always wanted or help them get through a tough time. The individuals in season 1 include a single dad who has to prepare for a date, a mother of two who needs help decluttering her life and coming out of auto-pilot mode, a 22-year-old coach who needs help as he comes out and wants to move out of his parent’s house to start fresh, an 18-year-old coping with a saddening loss, and finally a movie enthusiast who must fight his way back from depression.

The series shows the ‘Fab Five’ in action as they go to lengths to help the individual get set and take a new perspective on things. There are many emotional moments that move the group and the audience as well.

The main cast is the ‘Fab Five’, a group of real-life experts in different fields. Aljosha Muttardi is a nutrition consultant and doctor, David Jakobs is a hair and makeup artist as well as an influencer, Ayan Yuruk is an interior designer, Leni Bolt is the life advisor, and Jan-Henrik Scheper-Stuke takes lead on fashion.

Where To Watch Queer Eye Germany?

The first season of the reality-tv series Queer Eye Germany is available to stream on Netflix.