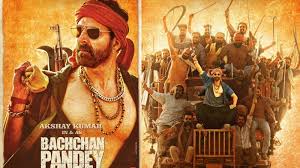 Akshay Kumar has been perhaps the only actor to have consistent releases even in the time of Corona. The actor managed to deliver even in odd circumstances. Kumar is known for his speed in churning out movies. Now that Akshay’s next Bachchan Pandey is all set to release, fans are excitedly waiting for its release. There are lots of questions surrounding the film that fans want the answer to. This film seems to be very different than typical Akshay Kumar movies and hence the excitement amongst fans is at an all-time high.

Bachchan Pandey has drawn inspiration from several films. There were rumors around the film being loosely inspired by Ajith Kumar and Tamannah starrer Veeram. A Tamil film that was released back in 2014. It doesn’t seem that the original film or the several adaptations are based on a true story. There seem to be little to no evidence to back up the fact that the film could be inspired by real events. Akshay has gone under a makeover for this film and looks very different than his usual self. The actor has been taking up roles that make him go through transformations, which Aamir Khan is famous for. Akshay will be seen in a black lungi in this film.

Bachchan Pandey is a Hindi language action thriller film. The Farhad Samji directorial has been written by Farhad Samji, Tushar Hiranandani, Sparsh Khetarpal, Tasha Bhambra, and Zeishan Quadri. The story of Bachchan Pandey is based on a 2014 Tamil film named Jigarthanda by Karthik Subbaraj. Both films have been inspired by a South Korean film named A Dirty Carnival that was released in 2006. Nadiadwala Grandson Entertainment has produced the film. The film has a runtime of around 142 minutes. It will release on the 18th of March 2022.

Is Bachchan Pandey Based On A True Story?

The story of Bachchan Pandey revolves around an aspiring director who aims to make a biopic. Her task was only to ensure that she makes a gangster flick. However, her fascination with real-life gangster Bachchan Pandey attracts her attention and so she decides to go ahead with the plan. As we see in the trailer, the man is scary. He can kill people solely for his pleasure. It is mind-boggling to see a man who can kill anyone and everyone for his entertainment.

The story is being presented humorously but that doesn’t take away from the fact that it is beyond comprehension to figure out why is the man on a mission to kill. Bachchan Pandey is not your typical villain. He doesn’t have a sad story behind him and seems to work purely on instinct. He’ll kill people if he wants to. Seeing his story one can not help but wonder how near truth is the film.

There are high chances that Bachchan Pandey will do great at the Box office. Considering the fact that the lead actors have proved their massive pull at the Box office time and again. The trio of Nadiadwala, Kumar, and Farhad Samji has also given many hits including the Houseful series and Heyy Babyy. The release of the film has been postponed quite a few times due to the Corona crisis. Now that the situation seems to be under control, the film is releasing in theatres with promotions going around. The buzz is fine enough for a big opening and further performance of the film will depend on the story and how well made the film is.

Where To Watch Bachchan Pandey?

Bachchan Pandey will be released directly in theatres. Viewers can watch it at their nearest theatres.