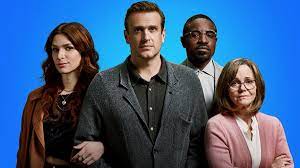 Dispatches from Elsewhere is an American anthology drama series that premiered on March 1, 2020, on AMC. Jason Segel is the mind behind this show and also stars in it. Dispatches from Elsewhere was filmed in Philadelphia by Jason’s choosing due to his fondness for the city’s public art which he saw during their search for a filming location. This series is based on the 2013 documentary ‘The Institute’, which is about an alternate reality game. So far, the show only has one season consisting of 10 episodes. All the episodes are about 42-46 minutes long, while the pilot and finale have a runtime of 52 minutes.

The suspenseful story focuses on 4 ordinary people who are drawn together by chance and are slowly pulled into a game because they feel something is incomplete in their lives. This game unfolds into a series of twisty occurrences and has them going to various places as they try to piece together a puzzle.

As of now, the show has not been renewed or canceled. Though it has been quite some time since the release of season 1, the chances of another season are pretty decent. This is because it is an anthology series and the second season will probably follow a completely new story with a new cast.

Though it has not yet been confirmed, a second season is likely to happen, despite it being a little late. Back in 2020, Jason Segel said in an interview that it would either be an anthology or a limited series. He hinted at the fact that each season would be a stand-alone story of its own.

That being said, we can only speculate on the possibilities since they can choose to make season 2 about anything, but it should have a similar theme to season 1.

The life of Peter, a data worker who struggles to find meaning and satisfaction in his routine everyday existence, has a breakthrough when a flyer brings him together with other like-minded people and they begin an adventure together. In episode 2, the group follows clues as they explore the city, but also realizes the game runs deeper than they initially thought. Episode 3 has the gang searching for Fredwyn at the shareholder’s meeting, during which they have their first contact with Octavio. In the next episode, Fredwyn first confronts Octavio and then ends up stealing some papers from him and his teammates take it a bit far in their search for answers which leads them to an unexpected location hidden in plain sight.

We then see the gang learn a lot about Clara from writing on the wall at the hideout in episode 5 and also see the deeper impact of the game on each of them. In episode 6 the group splits into two to work different angles that eventually lead them to the same place and same confirmation: Clara is real.  The next episode shows the group following a character nicknamed the ‘milkman’ into a basement where commander 14’s identity is revealed along with the point of the game and the end to it.

Simone and Peter kiss and the episode ends with the group talking to other players. The last three episodes show how the individuals cope with everything that has happened, Peter and Simone go out on their first date, and Fredwyn refuses to let things go. In the Finale, one final puzzle is solved and the real truth comes to light as everything turns out to be one big movie. Lee was Clara all along and the main message was about community and people coming together.

The whole season was a ride and the ending was definitely unexpected and well written.

Where To Watch Dispatches From Elsewhere Season 2?

Season 1 of Dispatches from Elsewhere is currently available to watch on Prime Video. The second stand-alone season, if the show is renewed for it, will likely air on AMC first and later also be available on the paid streaming platform.