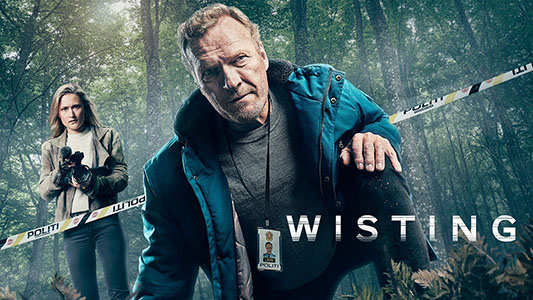 Wisting is a Scandinavian Noir produced in Norway. It is created by Trygve Allister Diesen and Kathrine Valen Zeiner and directed by Trygve Allister Diesen and Kathrine Launing . The series is based on the three works of  Jørn Lier Horst, namely ‘The Caveman’, ‘The Hunting Dogs’, and ‘The Inner Darkness’. It is written by Vegard Steiro Amundsen, Anne Elvedal, Kjersti Ugelstad, Trygve Allister Diesen, Kathrine Valen Zeiner, and Jadranko Mehic. The thriller drama stars Sven Nordin, Carrie-Anne Moss, Mads Ousdal, and Thea Green Lundberg in the lead roles. The story revolves around the detective William Wisting, who struggles to solve the most difficult and twisted cases of his career.

ALSO READ: HERE ARE THE 12 MINISERIES ON DISNEY+HOTSTAR!

The story is set in Norway, the series begins with the finding of a dead body under a Christmas tree in Larvik, Norway. William Wisting is appointed to solve the case and find the murderer. The fingerprints found in the crime scene take them to the killer, Robert Godwin, who is an American serial killer. He has been hiding from the police for about 20 years and sources say that he has been settled in Larvik under the identity of a local resident. Special Agents Maggie Griffin and John Bantham from the FBI are sent to help William with the investigation. The trio travels through different paths to solve thecae. Meanwhile, Line Wstng, William’s daughter and a journalist works on the story of the death of a neighbor, which coincides with Wisting’s investigation. This puts her in great trouble.

In the end, the trio finds the killer and corners him, giving it a satisfying ending. But the story doesn’t end there. William gets invited on a national television show to discuss Robert Godwin’s case. But unexpectedly he is ambushed by Philip Henden, who s a lawyer who represented Vidar Haglund. Haglund was sent to prison for 17years, now he is released. Though Haglund proved his innocence, the crucial DNA evidence submitted by Wisting made him end up in prison. Now Philip proves that the evidence has been tampered with. This made him get suspended from the investigation. All the newspapers and Tv channels hunt William saying that he is a criminal. This makes Line determined to clear her father’s name. But soon she realizes that the crime she is working on is connecting to everything else. This brings us to the end of season 1.

Where To Watch Wisting?

The series Wisting is available on Amazon Prime Video. Watch and Enjoy!

MUST READ: 15 PSYCHOLOGICAL THRILLER MOVIES ON NETFLIX THAT ARE MUST WATCH!