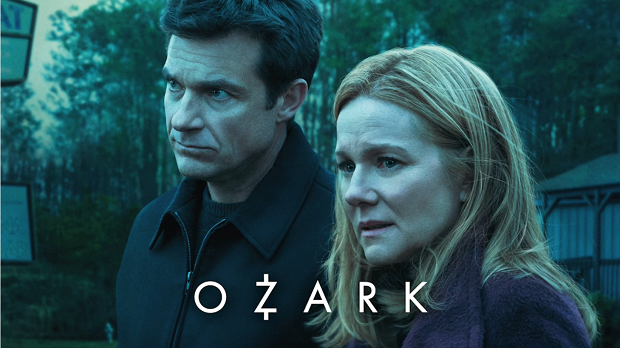 Ozark is a crime drama television show of America that was created by Bill Dubuque and Mark Williams. This is a Netflix streaming program based on a story of a family who just moved to the lakes of Ozarks to launder money for a Mexican cartel.

After a money laundering project for a Mexican drug cartel goes horribly wrong, financial consultant Martin “Marty” Byrde offers to make amends by establishing a larger laundering operation in central Missouri’s Lake of the Ozarks region. Marty relocates his wife and kids from the Chicago suburb of Naperville to Osage Beach, Missouri, a rural summer vacation hamlet. The Byrdes become enmeshed with local criminals, particularly the Langmore and Snell clans, and eventually the Kansas City Mafia when they arrive in Missouri.

Critics have praised Ozark for its performances, direction, writing, style, and production values, and it has received mostly positive reviews. There have been thirty-two Primetime Emmy Award nominations for the program, including two for Outstanding Drama Series. Jason Bateman received many Emmy Awards, he was in the leading role in the series, and also serve as director and executive producer.

Why Is Ozark Season 4 Divided Into Two Parts?

The same thing happens with Ozark season 4, One of the show’s producers Chris Mundy opens about their decision while talking to TheWrap. He said that the original intention was for five seasons, but they didn’t want the tale to drag on too long. Instead, they chose to make a longer fourth season, which Netflix suggested breaking into two parts.

So basically, they didn’t want the story to get messed up just to make another season, and dividing season 4 into two parts solves that problem.

In a flashback, the Byrdes are in their minivan discussing an anticipated FBI meeting when they are nearly hit by an oncoming truck and rollover. Navarro’s guests enjoy his party in the present, while Marty and Wendy clean up Helen’s blood in a bathroom. Navarro informs them during the party that they are celebrities since they persuaded the FBI to bust the Lagunas cartel. Navarro begins by introducing his nephew Javier, who wants to take over as leader, and asks how they’ll persuade Darlene to stop selling drugs; they claim they’re taking it slowly because of Darlene’s ties to Sheriff Nix. Ruth receives Ben’s ashes from Jonah. Navarro tells Marty and Wendy that Javi is eager to take over and will kill them all if he detects weakness.

Navarro urges Byrdes to help him strike a deal that will allow him to retire without fear of being prosecuted. Wendy is adamant, but Marty agrees to give it a shot. Mel Sattem, a private investigator, tries to locate Helen so she may sign documents about her pending divorce. On Satem’s advice, Nix pays a visit to Helen’s house, where he meets Javi. Javi assassinates Nix and then sends his remains to the Byrdes for cremation.

Maya gives birth to her child and goes on maternity leave. Leigh Guerrero, the sheriff of a neighboring county, is Nix’s temporary replacement. Javi instructs Marty to clean Helen’s house in order to conceal proof of Nix’s death, and Javi is forced to flee when Guerrero comes and interrogates Marty.

READ MORE: 10 SHOWS LIKE SUPER PUMPED THAT YOU CAN WATCH RIGHT NOW!