Married to Real Estate is an American reality TV show that was released on January 13, 2022. It depicts the work-life balance of real estate power couple Egypt Sherrod and Mike Jackson as they use their combined skills, expertise, and creativity to make their clients’ dream home a reality. The first season, which had 8 episodes of about 43 minutes each, was well received by audiences at its initial release and has an IMDb rating of 7.4/10.

The couple must work in synchronicity to make well-thought-out purchases and smart renovations to put a smile on the clients’ faces, and they must do it all while balancing a busy family life at home.

Season 1 of Married to Real Estate concluded only recently on the 3rd of March, 2022. So as of now, no renewal has been announced. The chances are looking very good for a second season due to the fact that the first season was liked by audiences around the globe. Not to mention there is no shortage of real estate-related content.

Seeing as there is a definite audience demand for another season and plenty of material to cover in it, we can expect at least one more season of this reality show. If it were announced though, it would take quite some time to be filmed and prepared for release, probably being unveiled sometime in 2023.

Season 2, if and when it is released, would continue to follow the clever planning, purchases, and renovations of Egypt and Mike, Georgia’s very own super duo of real estate.

There are always new projects coming up as people move due to financial or family situations. Then there are people who want their dream home, some just a little uncommon, and some straight-up one of a kind.

The second season would also give us a look into their personal life as they manage to take care of their clients as well as their daughters. The producers could give us a behind-the-scenes look at the hard work and measures the duo take beforehand to keep everything running smoothly, while also providing a quality service.

These are just speculations at this point as we have to wait for HGTV to confirm any news regarding a second season.

The first season consists of 8 episodes that cover projects varying according to the client’s needs. In the first episode, Egypt and Mike help first-time buyers obtain a vintage home and turn it into the mid-century dream they envisioned. The second episode follows the duo as they help a young couple on a budget buy a home in the well-known Marietta Square of suburban Atlanta, Georgia.

Another notable episode is the fourth one, in which they have to overcome permitting issues to design the floor plans for a couple’s dream home in Grant Park.

The conclusive episode has Mike and Egypt obtaining a home in the coveted Brookhaven neighborhood for cheap and renovating it into something stunningly modern.

Egypt is no newcomer to the HGTV Network as she was the host of Property Virgins back in 2007 and then went on to become the host of Flipping Virgins. Both Mike and Egypt even shared the screen as judges on HGTV’s Rock the Block.

The couple is also pretty transparent about their family life both on the show and on social media. They share moments of their everyday life now and then and are completely comfortable being themselves in front of a camera.

Even the show Married to Real Estate was, in a way, inspired by the couple sharing their daily life on social media during the pandemic, according to an interview they had with HGTV.

Where to Watch Married To Real Estate?

Season 1 of Married to Real Estate is streamable on HGTV and on Prime Video, though only for certain countries. If the show does get renewed for a second season it will be available on the same two platforms. 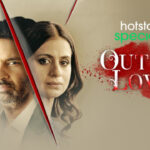