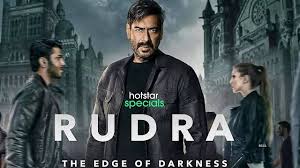 Ajay Devgn has managed to carve a new image of himself in the past few years. He has been working continuously and yet his projects are versatile. After making the audiences laugh in Total Dhamaal and setting up a precedent with Tanhaji, Devgn is back with his new release in an entirely new genre. Rudra: The edge of darkness is a psychological crime thriller. Indian movies have not yet been able to attain success in the genre and so Rudra has a lot of excitement and hope around it.

The thriller has been directed by Rajesh Mapuskar. The series is based on a Neil Cross-directed British drama named Luther. The first season of the series was released on 4th March 2022. The first season has a total of six episodes. The psychological crime thriller drama has been produced by Sameer Nair under the production companies of BBC Studios India and Applause Entertainment. Star India is the distributor of the series. The series has an IMDb rating of 7.9 on 10.

MUST-READ: When Will Season 2 Of The Worst Roommate Ever Release?

Is Rudra: The Edge Of Darkness Based On A True Story?

The story of Rudra: The edge of darkness is set in Mumbai. The show dives deep into the minds of criminals and detectives. It is a race against time. The detectives are surely intelligent but the criminals are surely capable of one-upping them. With each new episode, a new threat is posed and the detectives must find a way to solve it. As each episode passes, we learn more about the protagonist DCP Rudra Veer Singh. Rudra faces various obstacles in his life while solving the cases and a lot of secrets are unraveled as the series progresses. Through the story, Dr. Aliyah Choksi, a genius practicing sociopath and Rudra develop a friendship. The super cop is brilliant and that adds to the thrill.

As seen in the trailer, the team of investigators knows Rudra is a genius. The show has a very talented cast which adds to its brilliance. The director of the show is also extremely talented with his filmography consisting of the much-appreciated film, Ventilator. The series has been receiving acclaim from both critics and audiences. The series has a clever name, too. The edge of darkness is the beginning of light. The dialogues have a filmy knack to them. Rudra is the kind of person who is dedicated to his job and won’t waste time on pleasantries. He has solved the most number of cases amongst members of Mumbai Police. Ajay has been successful in portraying the look of a no-nonsense man.

Rudra: The Edge Of Darkness Cast

Where To Watch Rudra: The Edge Of Darkness ?

Rudra: The edge of darkness is streaming on Disney+ Hotstar.