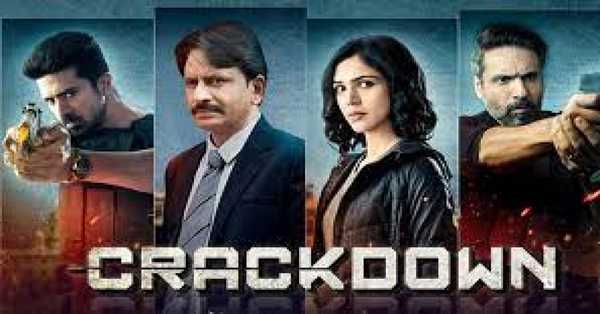 Make your weekend with a Bollywood web series this time. Created by Apoorva Lakhia, who has also directed the series, Crackdown is an Indian Spy thriller web series that is written by Chintan Gandhi and Suresh Nair. The series revolves around a mission, terrorists, RAW agents with all the action scenes it needs.

All the episodes of the series premiered on September 23, 2020. A long 30 to 35 minutes long series contains 8 episodes and received good reviews and ratings from the critics. All the action scenes with the power of guns and crime stories have made the series amazing. This is the OTT debut of Apoorva Lakhia, and after the release of the web series, he is very well satisfied and happy.
Want to watch its next season?

In the year 2020, Apoorva had made his Instagram post by telling the viewers that the series will renew for its second season by 2021 or in the mid of 2022. Well, 2021 is gone, and the wait is in the same year: 2022. As the story was incomplete in its first season, it will complete in the next installment, and you have to wait for it though.

ALSO READ: 6 Shows Like Reply 1988 That are Available to Stream Right Now!

The premise of the series revolves around the life of a few Research and Analysis Wing (RAW) agents. Riyaz Pathan or RP is the main lead of the series, who along with his squad team, is on a mission to save India from the gangsters. They all unravel a major conspiracy that can impose a large threat to the national security of the country. For their mission, they hire and train a simple girl Divya, who looks exactly like Mariyam, who is one of the terrorists. She helps the agents by telling every bit of news and report of the terrorist gang. Later, in the series, it was revealed that Garima, Zorawar’s wife, is leaking information of the agents to Pakistan, and she is is a terrorist whose real name is Mausam.

She holds Divya and Fawzia in captivity. In the latter half of the series, the master plan of the terrorists was revealed. They planned to attack an airplane on its way to the Indira Gandhi National Airport. At the airport, Zorawar shoots and kills Garima and the main terrorist Kazi, but is it all done? Actually, the terrorists have a backup plan too, which was to hijack an airplane and threaten the passengers. The series ends with a cliffhanger, leaving the viewers in a suspense about what will happen next. At such a point, the series needs a second season, which will just come in some time.

Where To Watch Crackdown Season 2?

You have seen enormous and tremendous actors and actresses in season 1, who have beautifully portrayed their roles. Let us know the cast in detail. Saqib Saleem was seen as Riyaz Pathan/RP, Shriya Pilgaonkar as Divya Shirodkar/Mariam, Mohammed Iqbal Khan as Zorawar Kalra, Garima’s husband, and Ankur Bhatia as Tariq are in the lead roles. There are other casts too including Rajesh Tailang as Ashwini Rao who is RAW Chief, Waluscha De Sousa as Garima Kalra, Zorawar’s wife and an ISI Agent, Ekavali Khanna as Seema, Ashwini’s wife along with Saba Saudagar as Fawzia who is also an ISI Agent with Tauqeer Alam Khan as Rajesh.

Bollywood industry and its workers are known for their amazing work and projects. Like any other series or show, secondary casts too performed very well and left a beautiful image. Other casts include Tanya Desai as Ananya, Rajesh’s wife, Palak Jaiswal as Lekha, Ashwini’s daughter, Vipin Bhardwaj as Bala, and Mudasir Bhat as Kabir. The same cast will be back in the next season too to again entertain the audience.

MUST-READ: Will There Be A Season 2 Of Worst Roommate Ever?