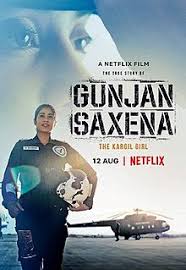 War has always been a public fare. War impacts people from all sections of life. It gives birth to emotions that one doesn’t feel otherwise. Civil Wars tend to have a remarkable history. A lot of people have stories carried through generations. It is of immense pleasure and excitement for these people to witness the dramatized version of the war. How did things happen? The depiction of the Civil War in shows and films ignites excitement. Many filmmakers have dived in the territory of making films on the Civil War. A lot of these movies are also on Netflix.

Women have for a long time been underestimated. It is believed that they are physically weaker than men and therefore can not hold their own in front of them. However sooner than later women are entering the army. One such woman is Gunjan Saxena. Directed by Sharan Sharma and produced by Dharma Productions, the film was released directly on OTT in 2020. Gunjan had played an important role in the 1999 Kargil War. The titular character was played by Janhvi Kapoor. The drama had received positive reviews from critics and audiences, alike.

This movie based on the Vietnam war has been directed by Spike Lee. The movie starring Delroy Lindo, Norm Lewis, Clarke Peters, Isiah Whitlock Jr., and the late Chadwick Boseman was released in 2020. The movie has an IMDb rating of 6.5 on 10. Even though the story is fictional, it is an ode to the veterans of the Vietnam War. Lee has also produced and written the movie. It has a runtime of 156 minutes.

This 1976 Nigerian film is a period drama. It has been directed by Izu Ojukwu. The plot of the film revolves around a young woman, pregnant and married to a soldier, the woman finds her in a conflicted situation when her husband is wrongly accused of conspiring against the military and being involved in a coup. Despite the film being set some years ahead of the Nigerian war, 76 has various references to it. The romantic drama stars Ramsey Nouah, Pat Nebo, Chidi Mokeme, Rita Dominic, and Ibinabo Fiberesima in pivotal roles.

MUST-READ: Is The 100 Worth Watching?

The action war movie directed by Roland Emmerich was released in 2000. The Patriot brilliantly explores the aftermath of what happens to the minds of war veterans. It impacts their brains in a way that harms their lives in more ways than one can imagine. The plot centers around one such patriot, Benjamin whose complex past comes haunting him after he gets married. He has lived a violent past as a consequence of his background in the army. As a war veteran, he has memories of killing others. The movie grapples with the various ways in which this impacts his married life.

David Michôd is a director who has some great works credited to his name. The Brad Pitt movie has an IMDb rating of 6 on 10. The premise follows Glenn McMahon, a successful 4-star general who has been given the responsibility of commanding the NATO forces in Afghanistan. The film was released in 2017. The movie stars Anthony Michael Hall, Anthony Hayes, Topher Grace, Will Poulter, Tilda Swinton, and Ben Kingsley in pivotal roles. The film is an intelligently written satire and has a runtime of 122 minutes.

6. First They Killed My Father

First They Killed My Father is a Canadian American war drama that was released in the year 2017. Directed by Angelina Jolie, the movie stars Sreymoch Sareum, Kompheak Phoeung, Socheata Sveng, Dara Heng, and Kimhak Mun in pivotal roles. The premise of the movie revolves around Loung Ung, a five-year-old who finds themselves stuck in a strange web of circumstances and is forced to become a child soldier. All of this happens as her siblings are sent to a labor camp.

NEXT-READ: IS BETTER CALL SAUL A PREQUEL TO BREAKING BAD?

7. Beasts Of No Nation

This Cary Joji Fukunaga-directed movie was released in 2015. The war drama happens against the background of a civil war in Africa. The movie revolves around a fierce warlord who trains young orphans to join his group of guerrilla soldiers. It stars Idris Elba, Kurt Egyiawan, Jude Akuwudike, Emmanuel Nii Adom Quaye, and Abraham Attah in pivotal roles.

The 2001 war drama film directed by Francis Ford Coppola. The movie follows an American war captain. The movie is set against the background of the Vietnam war. The story progresses as the captain is sent into Cambodia for the assassination of a renegade colonel who is considered a demigod amongst the local tribe.

This 2020 released drama is directed by Greg Barker. The movie stars Wagner Moura, Ana de Armas, Garret Dillahunt, Clemens Schick, Will Dalton, Bradley Whitford, Brían F. O’Byrne in pivotal roles. The movie revolves around UN diplomat Sérgio Vieira de Mello who must do everything to protect himself when he finds himself caught in a life-threatening situation, the aftermath of a bomb blast in Baghdad, Iraq.

This American gothic war drama movie was released in 2017. It revolves around a soldier named John McBurney who was also involved in Civil War. Being from the rival group, John has to seek refuge in an all-girls boarding school. The film progresses as John’s stay at the school gives way to a varied range of emotions like lust and jealousy. The film is directed by Sofia Coppola. It stars Colin Farrell, Nicole Kidman, Kirsten Dunst, and Elle Fanning in pivotal roles.

ALSO READ: Is A Million Little Things Based On a True Story?