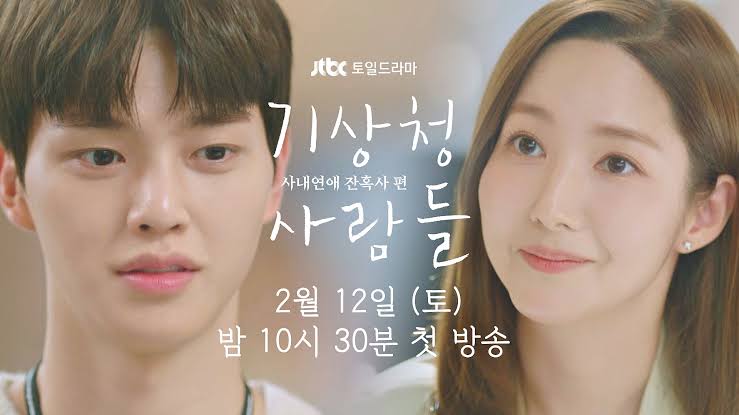 Korean love stories are simply the most viewed shows worldwide. This is one of the reasons why many k-dramas in this genre are being released every now and then. Forecasting Love and Weather is one of the very recent shows that is still ongoing. This South Korean TV series is created by Kang Eun-Kyung and written by Seon Yeong. Pyo Jong-rok and Kim Hyeong-Cheol are the producers of the show Forecasting Love and Weather.

The episodes are directed by Cha Young-hoon and star Park Min-young, Yoon Park, Song Kang, and Yura. As the name suggests, the show is about the lives of people working in the Korea Meteorological Administration. There are also elements of comedy included in the show. The first episode premiered on 12th February 2022 on JTBC. The second episode was uploaded on 13th February 2022. The upcoming episodes will be released every Saturday and Sunday. Accordingly, the next episode 3 is scheduled for 19th February 2022.

The announcement for Forecasting Love and Weather Season 2 release date may be done by the end of April this year. Usually, the stories of k-dramas with episode distribution like this do not carry over for a second season. But as said, nothing can be said as of now. Fans will have to wait until the climax episode of the show is released.

The pilot episode of the show is titled “Signal”. The show kickstarts with the main protagonist Jin Ha-Kyung. She is struggling with her job as well as being pressurized for marriage by her family members. Her career as a KMA forecaster takes a blow when her agency could not forecast a huge hailstorm that struck the main city area. Meanwhile, another junior forecaster, Lee Shi-woo who is obsessed with weather forecasting and his work, tries to convince the agency’s authorities that there is a potential rainshower coming late in the afternoon. He was also one of the few forecasters who predicted the hailstorm as well.

The next episode is titled “sensible temperature”. Jin Ha-Kyung finds out that Han Ki-jun is having an affair. She is distraught by it and breaks off her upcoming wedding ceremony with him. Si-woo and Ha-Kyung start working together in the same department as Si-woo joins there temporarily. Si-woo’s obsession with weather gets him into an argument with his senior and Ha-Kyung tries to negotiate. They somewhat have the chemistry of their own. The further plot revelation will be done in the upcoming episodes of Forecasting Love and Weather.

Where To Watch Forecasting Love And Weather?

According to other k-drama formats, Forecasting Love and Weather will also most probably have a total of 16 episodes. All these episodes will premiere on JTBC. The episodes are released every weekend, on Saturday and Sunday at 22:30 hours KST. The episodes are simultaneously released on Netflix as well for other viewers. All the episodes are cleverly titled after various weather forecasting words and terms. After the release of two episodes, the show stands at a rating of 8.5/10 on MyDramaList and 7.9/10 on IMDb. This is considered to be a great response from the viewers.