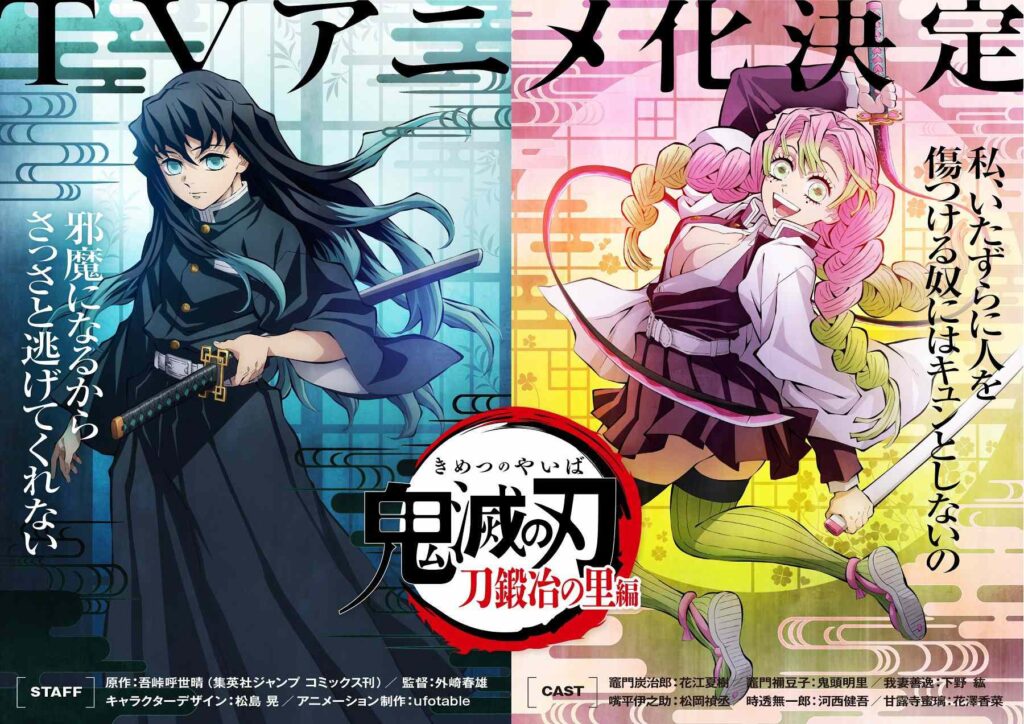 Along with all the news, a teaser featuring Muichiro Tokito, the Mist Hashira, and Mitsuri Kanroji, the Love Hashira, was featured on the front page of the Demon Slayer website. Given how little knowledge Ufotable has released, this official statement is more of a reassurance to viewers that the Swordsmith Village arc will be tailored into a season rather than a film. Excluding the Infinity Castle arc, the Swordsmith Village arc is considered by manga aficionados to be the greatest.

The arc not only matures dozens of characters, but it is also larger and more detailed than many of the series’ arcs. Gamers are now anxiously anticipating the worldwide release of Demon Slayer Season 3 from Ufotable.

The Swordsmith Village is Demon Slayer’s eleventh arc. Since Haganezuka declines to mend the boy’s weapon once again, Tanjiro and Nezuko proceed to the Swordsmith Village. Muichiro Tokito, Mitsuri Kanroji, and Genya Shinazugawa are among the people they encounter there. The whole arc furthermore introduces Gyokko, Upper Moon Rank Five, and Hantengu, Upper Moon Rank Four, in addition to the construction of Tanjiro’s companionship with these three main characters. Enthusiasts can look forward to seeing two specific confrontations, particularly the one featuring Muichiro. Unfortunately, Zenitsu and Inosuke would not be heavily covered in this arc.

Season 2 of Demon Slayer just ended, with seven episodes addressing the Mugen Train arc and eleven episodes portraying the Entertainment District arc. The anticipation didn’t wind up off until Episode 8 when Tanjiro Kamado and his companions went into Yoshiwara, Tokyo’s red-light district, to pursue a demon, because the first half of the season repackaged material from the Demon Slayer: Mugen Train film. Or, as we later found out, a pair of devils. The current battle featured beautifully coordinated battle scenes, great animation that outshone the movie, and dramatic important moments.

This intersection point hasn’t appeared in the anime in a bit, so here’s a reminder. Tanjiro first met Tamayo, a rogue demon who seeks to defeat Muzan, in Season 1. She decided to help Tanjiro discover a means to reinstate Nezuko’s humanity because she is a good doctor. Tanjiro is required to take samples of blood from the Twelve Demon Moons as part of that agreement. Daki and Gyutaro are ideal prospects because they are both Upper-Rank Six. Blood Demon Art is Nezuko’s way of creating hellish fire from her blood. We first saw Nezuko utilize it in Season 1 during her duel with Rui. She used this to free Tanjiro from Enmu’s dream spell in Demon Slayer: Mugen Train.

She utilized it again in the finale, first of all, to neutralize Gyutaro’s post-death assault, then to help burn the poison residues in everyone’s bodies. We also saw her use it against Daki earlier this season, severely hurting the Upper-Rank demon. Although her Blood Demon Art is harmless to people, it has proven to be successful against any other demon discovered thus far, which speaks much about Nezuko’s tremendous demon capability.

Gyutaro appears to be a demon, whereas Daki appears to be in her actual human form. She, unlike Gyutaro, has the option of going into the light. But she eventually decides to stay with him, and the two of them end up in Hell together. The similarities between Gyutaro and Daki as siblings and Tanjiro and Nezuko as siblings are one of the causes the Entertainment District Arc is one of many fans’ favorite storylines. Gyutaro and Tanjiro are both brothers who are merely seeking to protect their younger sisters. Gyutaro may be a demon who thrives on murder and violence, but the way he cares for his sister in the face of adversity is touching and terrible.

ALSO READ: WHERE IS LOVE IS BLIND: JAPAN FILMED?