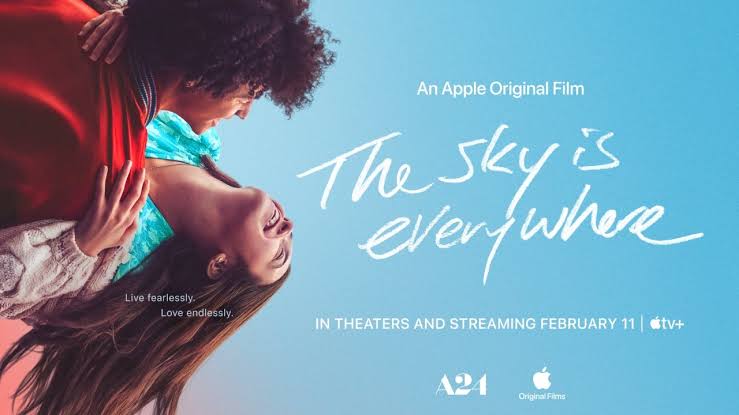 The month of Romance and Love is here and so are back-to-back romantic movie releases. On 11th February 2022, The Sky Is Everywhere was released by A24 and Apple TV+. Written by Jandy Nelson and directed by Josephine Decker, The Sky Is Everywhere is an adaptation of a novel of the same name. The novel is also written by Jandy Nelson. The film is produced by Josephine Decker, Allison Rose Carter, Margaret French Isaac, and Denise Di Novi.

The Sky Is Everywhere is an English language film starring Grace Kaufmann, Jason Segel, Pico Alexander, Cherry Jones, and Jacques Colimon. The story revolves around the themes of romance, betrayal, wanderlust, and forgiveness in love. It has an average rating of 6.4/10 on IMDb and a 68% approval rating on Rotten Tomatoes. The reviews are fairly positive to the average for this movie. The cinematography is done by Ava Berkofsky.

Is The Sky Is Everywhere Based On A True Story?

No, the story of The Sky Is Everywhere is not based on true events. However, it is an adaptation of a novel of the same name. Apart from writing the original novel, Jandy Nelson also served as a writer for the movie adaptation. Even though the story is completely fictitious, the author has taken the inspiration to write the novel from her real life.

She said that her mother’s death had made her work on the novel. One of the major plot elements of The Sky Is Everywhere is dealing with grief. Jandy Nelson says that the inspiration for this theme came from her real-life experience when her mother died. The movie portrays the cataclysmic effects of grief and loss very beautifully.

The Sky Is Everywhere Story

The story revolves around Lennon “Lennie” Walker who is a high school student. She mostly spends her day following her music, band, and love for nature. She also has an older sister, Bailey, whom she is close to. Both the sisters live with their grandmother Gram and Uncle Big. However, things take a very sad turn when Bailey suddenly dies from heart arrhythmia while she was rehearsing for the play Romeo and Juliet.

This event throws all three of them into grief and depression. For comforting herself, Lennie leaves out poems and small notes containing conversations of her and her sister. She also finds an unusual comfort in Toby, who was Bailey’s boyfriend and fiance when she was alive. Lennie is sexually attracted to him and both of them cope with their grief by beginning a lustful relationship.

However, Lennie soon meets Joe Fontaine, a new boy in town. Joe helps Lennie forget about her loss and also shares common interests in music with her. As he starts falling in love with him, she also cannot let go of the attraction she feels for Toby. Lennie is now entrapped in an awkward love triangle when she confesses her love for Joe.

The Sky Is Everywhere Ending Explained

More secrets come to light when Lennie discovers that Bailey was pregnant when she died. When Toby visits Lennie one day because he wanted someone to talk to, Lennie leans in and kisses him. But she was unaware of the fact that Joe was watching him. Joe, heartbroken, leaves and ends their relationship. Lennie tries to correct things with Joe by gifting him some of her grandmother’s roses but it doesn’t work.

Meanwhile, Gram also becomes angry with Lennie because she destroyed her roses. Lennie apologizes and shares the situation with Gram, and in turn, Gram reassures her that Joe still loves her. She then writes a letter to Joe confessing to her feelings and eventually Joe forgives her and reconciles with her. Toby and Lennie become friends and both visit Bailey’s grave and apologize to her. Lennie then decides that the only way to cope with her grief is to look forward and forget the past.

The Sky Is Everywhere Cast

The ensemble cast members of The Sky Is Everywhere include Grace Kaufman as Lennie Walker, Cherry Jones as Gram Walker, Jason Segel as Big Walker, Jacques Colimon as Joe Fontaine, Pico Alexander as Toby, and Ji-young Yoo as Sarah.