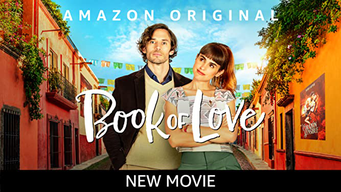 Romance and romantic movies or films are genres that no one can resist. Everyone gets happy and blossom after watching this genre. Book Of Love, by its name, is also a romantic drama film that is released recently. The Book of Love is directed by Analeine Cal y Mayor and written by Analeine Cal y Mayor itself with David Quantick. Released under the production of BuzzFeed Studios, Blazing Griffin, and Bondlt Media Capital, the plot revolves around the Mexican book tour of furious Henry and reluctant and exciting Maria. As they start spending time together, love finds its definition in between the two. Watch the beautiful romantic story of the two.

The film got released on February 4, 2022, on Prime Video. A long 100 to 110 minutes long film got 5.4 ratings on IMDb, 4.7 on Movie Insider, and 3 on Common Sense Media out of 5. It is generally liked by the audience as of the romantic genre that displayed in a different twist and taste. You must watch this film as it will take you to a different side of romance.

The story starts with a furiously and clumsy attitude and ends with love and care. The film focuses on Henry, who is an English writer and novelist and is struggling of the embarrassingly unsuccessful launch of his first novel, ” The Sensible Heart “. The book is such a failure that the shopkeepers have to make a ” Buy 1 – Get 3 Free ” deal on it.

Although it is a romantic one, no one can find a little tinge of romance in it. Oh – what a shame and pity he got during his venture! But, things are not the same always. The things also take a U-Turn in his life too, when he got to know from his marketing and business-minded publisher Jen that his book is doing a great job and became a great seller in Mexico and that he should go on a professional tour for this. Till now, no one knows what is the hidden reason behind the success of his book, until he lands in the beautiful Mexican world.

ALSO READ: Is Reacher Based On A True Story? Know Here!

Maria Rodriguez, a hardworking mother and a restaurateur by day along with a passionate writer by night is the reason behind the suddenly gained success of Henry’s book. To test her skills, she transcribed Henry’s dull and uninteresting book in the Spanish language by adding some more twists and crunch. Upon arriving and getting to know about her, Henry and Maria get on the Mexico tour along with her son, grandfather, and her musician ex who got jealous after seeing the friendship of the duo. After the great success of the first book, the publishers asked the duo to work in collaboration and do blunders again.

They, in collaboration, wrote ” Two Hearts “, which also became great-selling. Well, the two opposite poles writers slowly come to each other, which is as romantic as she transcribes Henry’s novel. Watch the beautifully scripted film once.

Is Book Of Love Based On A True Story?

No. The film is not based on true events or any book. It is a result of the imagination of the writer Analeine Cal y Mayor, who along with David Quantick makes a beautiful concept in which the film has made

Well, the cast is as amazing as the film. Know the details of the cast here. Sam Claflin is Henry is an English writer. Veronica Echegui seen as Maria is also the writer who just transforms Henry’s life and his book. The viewers will also see Fernando Becerril as Max Rodriguez along with Ruy Gaytan in the character of Diego. Lucy Punch saw in the character of Jen Spencer along with Melisa Pino who is seen as Helena. Antonia Clarke also debuted in the film in the character of Allison along with Horacio Garcia Rojas as Antonio.

MUST-READ: When Is Frank Of Ireland Season 2 Release Date Coming?