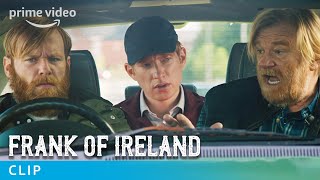 The comedy genre is one that will be beloved by anyone. One can get happiness and peace with this genre. Our today’s series is a comedy that you should definitely give a watch. Frank Of Ireland is an Irish comedy-drama television series and is created by brothers Brian Gleeson and Domhnall Gleeson with Michael Moloney under the direction of MJ Delaney. Released under the production of Amazon Studios and Merman, the plot revolves around the life of Frank Marron, who wants to be a singer/songwriter, but just ruins things with his friend and girlfriend.

Season 1 of the series was released on April 15, 2021, on Channel 4 in the UK and on April 16, 2021, on Amazon Prime in the USA, Canada, and Australia. It got 6.7 ratings on IMDB and only 45 % on Rotten Tomatoes. It is also liked by 75 % of people. Having gained not very good and bad ratings, the audience somehow liked it, as this is a comedy genre, and they liked the character of Frank the most. How he deals with his life and how he claims himself to be the singer is as fun as he himself.

If we talk about its next season; season 2, then here is what we can tell you about. Till now, the makers and the TV network have not made any announcement about season 2. They have, neither canceled nor renewed the series for its upcoming season, and the fans are waiting for it eagerly. Well, fans have to wait a little more to get the news.

Set in the towns of Dublin, the series revolves around a 32 – years – old Frank Marron, who till now lives with his alcoholic mother Mary Marron. He is an unemployed man – child, who wants to be a singer/songwriter. Doofus is his best friend, who works at a nearby grocery shop. Áine is his ex-girlfriend and found a new beau now. Frank is a self-proclaimed musician and a singer as he calls himself though, but has not written a single word or played a gig after his girlfriend left him six years before. He states that he is working on a double album that contains 32 counties of Ireland.

He plays unpaid performance gigs in some funerals and is struggling to get something better. His mother wants him to get a suitable job for himself and move in his life, but he, on the other hand, wants to focus only on his musical career. He also finds difficulties in his so-called ex-relationship with Áine. You must watch this comedy gig if you want to get relief from your stress. Watch how Frank goes with his boring life and will he be able to achieve what he wants to, ignoring that he is a lazy couched person.

Currently, there has not been any announcement about season 2 and so the cast it will include. But, according to me, Brian and Domhnall will come back again as they are the creators of the show, and without them, their charm will be missing. Other than the two, the series can be back again with the same old cast which includes Pom Boyd in the character of Mary Marron, Sarah Greene seen as Áine, Liz Fitzgibbon seen in the character of Nicola, Brendon Gleeson as Liam along with Paul Forman seen as Stéphane. Season 2 can be joined by another cast too, like Sade Malone seen as Zoe, Colette Lennon Dougal as Jan, and Janet Morran in the character of a Judge along with others, and for that, we have to wait for a little.