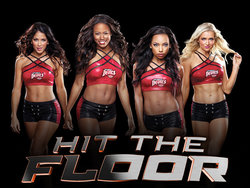 Sports drama has its own charm and craziness and Hit The Floor is one of them. Hit The Floor is an American sports drama television series, which is created by James LaRosa under the direction of Sanaa Hamri. Released under The Film Syndicate and In Cahoots Media, the series revolves around the Los Angeles cheerleader Devil Girls.

Will the series come up with its fifth installation? After season 3, VH1 transferred the series to BET, and season 4 also wrapped up in just 8 episodes. Though James had his plans to come up with season 5, after releasing only one season; season 4, BET has canceled its further installations. Although season 5 is canceled till now, we can wait if any other network releases or not.

Season 1 introduces us to the very new cheerleader, Ahsha Hayes, who has become the newest member in the professional basketball team, the Los Angeles Devil’s, and made Jelena her enemy, who is the captain of the team. Sloane, Ahsha’s mother used to be a cheerleader too, and she was shocked to discover that Pete Davenport, player and the coach of the Devil’s is her biological father. She was also teased by the bad boy player Derek Roman, even though he is involved with German Vega.

Season 2 blushes with the murder of Olivia Vincent, who was blackmailing several people, who were associated with the team. Derek and Ahsha decided to keep their relationship a secret, while Zero came up with a master plan to support the star players, Derek and Terrence Wall. He got involved with his male partner, Jude before he was seduced and burned up by Jelena. Season 3 came up with many twists and tricks. Jelena and Terrence were secretly trying to take over the Devil’s and Zero’s relationship with Jude also created problems. We also see that Oscar Kinkade was trying to seek vengeance against Sloane from the jail, who cheated him with Pete. Ahsha and Zero eloped in season 4, leaving Derek and Jude to find new relationships, and Eve Vincent came up with a plan to destroy Devil’s.

Kimberly Elise as Sloane Hayes is Ahsha’s mother who was one of the original Devil Girls herself and later becomes the director. Charlotte Ross might be seen as Olivia Vincent who is the former director of the Devil Girls and like Sloane, an original Devil Girl, who was murdered. Paylour Paige might be in the character of Ahsha Hayes again who is the breakout star of the Los Angeles Devil Girls and immediately becomes a threat to Jelena. Ahsha first gets into a relationship with her college boy German Vega, but later on, gets attached to Derek Roman.

Logan Browning in the character of Jelena Howard is the captain of the Devil Girls and the mean girl of the team, who is intent on making new girl Ahsha suffer. Despite her many schemes, she has a soft side for her boyfriend Terrence Wall, the Captain of the Devil’s. Kathrine Bailess in the character of Kyle Hart is a clever cheerleader. McKinley Freeman as Derek Roman is the husband of Ahsha and the love interest of London. Jonathan McDaniel in the character of German Vega is the assistant coach of Devil’s. He is the ex-boyfriend of Ahsha and the love interest Eve.