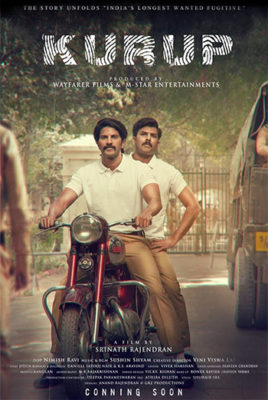 Kurup is a South Indian-based crime & thriller movie. The story is based out on the Alappuzha also known as Alleppey which is a very famous city in Kerala. The story is written by K.S. Aravind & Daviel Sayooj Nair. The movie was originally released on 12th November 2021 in theatres only in regional language. Since all the theatres were not working with 100 % capacity Netflix acquired the rights of Kurup and released it worldwide with all the South Indian Regional languages along with Hindi for all the North, east, and west Indian Viewers. Kurup was the first Indian Malayalam Film to feature on Burj Khalifa as a Promotion ahead of Film Screening on 10th November 2021.

Is Kurup A Real Story?

Kurup is based on the life of a 35-year-old criminal and murderer. The film was portrayed in Kerala which is the main city of Sudhakara Kurup. The movie unveils the loopholes in the police system and the bravery of a Police officer who identified the truth behind the Kurup lies and rigging for the money. Many claimed that the story is made up only yet many claimed that it’s the real story. Breaking all the chain of rumors the movie is based on true events from personal experience I can say that the story is true and the Police forces are still unable to find this guy Sudhakara Kurup. One of my closest family belongs to that area where this is born, they also told me that when they were residing in that area at that time only there were checking and barricading on the shores to catch the Kurup red-handed with all his crimes and lies.

As we know the story is real. The story started with a teenage boy Gopikrishna Kurup who was forced to join Indian Air Force where he met his friend Peter. Since they both were not regular to Training and camps, they both were posted to Bombay Air Force for Desk jobs But Kurup went into depression after that job so he had fallen ill after that he got 1 month of sick leave approval. And one day Peter came to know that Kurup Committed Suicide which was faked. Kurup Faked his death to get out of that cage.

After that, he changed his name to Sudhakara Kurup And married his love and they both got settled in Persia Where he met a Prince And started taking the smuggling of Crude Oils and at that time he bought and Insurance of 8 Lakhs so he came up with the plan to fake his death again. So, he planned to get back to India to execute his plan with his friends and relatives with each & equal shares. They murdered a guy to claim the amount but the Investigating officer realized the loops and started joining the links and he arrested all his 3 partners including Pillechan(Kurup Co-brother), Poonachan(Kurup Personal Driver) & Sabu but was unable to catch the Kurup.

The movie revolves around the fooling around of the police and running from the police and hiding from the Police. The movie shows the courage of the Police officer who kept hunting for Kurup taking all the odds against them. But in the end, the movie ended with the twist as another name for the Kurup was revealed as Alexandar Gotsmoshy. So, in part 2 the Kurup will also arrive showing the hunting from another police officer for the Kurup.

Sudhakara Kurup’s role had been portrayed by Dulquer Salmaan who is an Indian Actor as well as Payback Singer. Salmaan was born on 28th July 1986 in Cochin, Kerala. Salmaan completed his Bachelor’s in Business Management and earlier worked in Dubai. Since he started his acting career in early 2012, he is one of the finest actors from Kerala as he received Filmfare awards South 4 consecutive times. Salmaan made his debut in Second Show and he had received several more awards for his acting. He won almost 95% of the awards for which he was nominated.

ALSO READ: Is Amandla Based On A True Story ? Know Here !