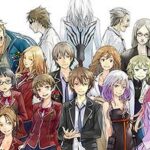 Guilty Crown is a Japanese animated television series written by Hiroyuki Yoshino and Ichiro Okouchi. Guilty Crown Season 1 was first aired on Fuji TV on October 13, 2011, and there is a total of 22 episodes in the first season.

The story revolves around the young high school kid Shu Ouma, who is the main protagonist of the series. The normal life of the male protagonist turns upside down when e realizes that he is not any ordinary high schoolboy. His right hand holds the ‘Power of the King’ a special power that he gets from the genetic weapon, Void Genome. This power gives his right hand the ability to extract Voids. Before he understands his powers and abilities, he was dragged into the war between two powerful organizations named GHQ, a quasi-governmental organization, and Funeral Parlor, a rebel organization. The rebel organization, as its name says, struggles to get back Japan’s freedom and independence from GHQ. Shu later joins the ‘Funeral Parlor’ and fight for their freedom.

Anime lovers have not yet overcome the hangover of watching ‘Guilty Crown’ season 1. The action-fiction drama managed to conquer the hearts of many anime lovers with a fantastic storyline. The characters still live in the hearts of many. Don’t you think such an inspiring series deserves a second season? Of course, it does. Since 2017, we have been hearing rumors about the season 2 release date. Unfortunately, the creators haven’t responded to any rumors yet. We really hope we would get good news at least in 2022.

ALSO READ: The Woman In The House Across The Street From The Girl In The Window Season 2 Release Date Updates!

The story begins with the protagonist, Shu Ouma, who accidentally gets the ‘Power of the King’ and Shu joining the Funeral Parlor to make the best use of his power. In one of the missions, he causes the death of his classmate’s younger brother which shatters him and he suspends the group. In the meanwhile, the Funeral Palor leader Gai and his forces secretly try to steal the meteorite(which caused the outbreak of Apocalypse Virus) from the GHQ but get caught in the process.  The Anti-Bodies destroy Gai and his forces and unleash the virus throughout Tokyo. Not only that, the Anti-Bodies leader Shuchiro Keido takes this as a chance to wipe out the Funeral Parol.

When Shu gets to know about the situation, he rushes to Tokyo to rescue his group. In the meantime, Inori(the female protagonist) tries to stop the outbreak by broadcasting her song on her channel. But she gets kidnapped by a mystery boy, Yu which allows the outbreak to continue in full force. Knowing this, he tries to rescue Inori, when he reaches there he finds Keido performing a sort of ‘marriage ceremony’ with Inori. Shu realizes that Keido is trying to restore Mana. Keido explains that Inori’s main purpose is to provide a body for Mana’s soul. Mona would take re-birth in her new body after the entire population is destroyed. This brought back Shu’s memories of his past and he realizes that Mana was responsible for the Lost Christmas incident(Apocalypse virus broke out in Japan and created chaos in Japan). She was the one who was first affected by the virus and that led to the Lost Christmas incident. He also remembers that Gai(Triton) is his childhood best friend. After that, with Ga’s help, he saves Inori from Keido and saves the world from great destruction. But unfortunately, Gai dies in the process. Later, Keido with his forces captures Roppongi and many teenagers take shelter with Shu, Inori, and his friends. He gets elected as the student council president and tries to escape from GHQ. Meanwhile, the dead Gai reappears and breaks Shu’s right arm to take the power from him. In order to save Shu, Inori single-handedly fights GHQ forces. In the meantime, Shu’s stepmother steals the Void Genome from GHQ. Shu injects it into his body to save Inori and Japan.

Gai joins the GHQ focus with Keido and continues the process of Mona’s resurrection. The virus breakout spread across Tokyo. The Funeral Parol team starts a massive strike to save Tokyo. N the climax battle, Shu and Funeral Parol defeats Yu, Keido, and the GHQ organization. Yu commits suicide by injecting the virus. On his deathbed, Gai explains that he did this to help Mona fulfill her curse, and then she could rest in peace. Inori, on the other side, gets infected by the virus. Shu tries to extract the virus with his power but Inori sacrifices herself to destroy this virus. With this, the GHQ tower gets collapsed and the virus dies once and for all. After a few years Ayase, Tsugumi, Yahiro, Kanon, Souta, and blind Shu celebrate Hare’s birthday in a rebuilt Tokyo.