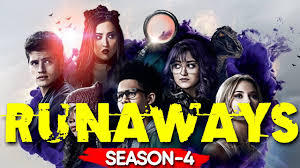 Marvel Cinematic Universe (MCU) is in a league of its own. Be it movies or TV series, anything under MCU’s name sells. Runaways is an example of that. The American TV series is based on a Marvel comic superhero. The creators of the show are Josh Schwartz and Stephanie Savage. It streams on Hulu. The show is set in MCU. The story often transcends with other series and movies of the universe. The producers of the show are ABC Signature Studios, Marvel Television, and Fake Empire Productions. The showrunners are Schwartz and Savage. The series is an adventurous teen drama with a superhero in it.

The show revolves around a group of six teenagers. Their group is called the Runaways. Season 1 of the show premiered on 21st November 2017. The story of season 1 progresses as the boys face the challenge of overcoming intimate differences to fight against their common enemy. The said enemy are supervillains in disguise.

The show had garnered positive responses from audiences. Fans wait with bated breath for the next season. They want to know if there is any probability of seeing a season 4?

All episodes of season 3 of the show are streaming on Hulu since 13 December 2019. Each episode had a fixed run time of 43-54 minutes. Season 3 was renewed for release in March 2019 and its release was announced in November 2019. This was also when the makers had announced that season 3 will be the last season of this franchise.

There have been a lot of speculations regarding the cancellation of the series. Some say that the story had ended and the final was inevitable. While others were of the opinion that the cancellation could be a consequence of the lukewarm response received by the previous season.

MUST-READ: Friends V/s How I Met Your Mother: Which Show Is Better Than The Other

The story in season 2 of the series showcases the teenagers running from their parents so they can experience independence. Their aim, this time is to stop Pride. Season 3 of the show depicts the team face off against aliens.

The film, based on a Marvel comic book of the same name went on floors in 2008. After the success of Avengers in 2013, the makers decided to shelve this film. In 2016, it was announced that Runaways has been given the green light and it will stream on Hulu.

There is very little scope for a season 4. However, the makers may consider making one since the fans are adamant about their demands.

Runaways has an ensemble cast of actors including Nico Minoru in a face-off against aliens and Morgan le Fay. Minoru’s character is being played by Lyrica Okano.