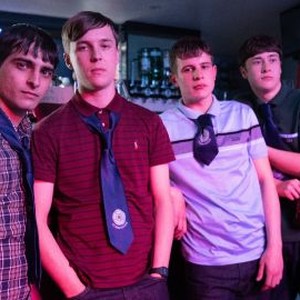 There has been a lot of comedy series lately that are self-starred by comedy writers. With recent developments of After Life Season 3, yet another comedy series called Ladhood is on the go. A coming of age British comedy, Ladhood is a show created and written by Liam Williams. The show is directed by Jonathan Schey and has two seasons so far. The first season was premiered on 24th November 2019 on BBC iPlayer. Ladhood is a TV adaptation based on a show by Liam Williams that aired on BBC Radio 4. It has an average rating of 7.2/10 on IMDb. Each episode has a runtime of 24-28 minutes.

All the episodes of Ladhood are produced by BBC Studios Comedy Productions. In February 2019, BBC announced the production of Ladhood will soon start. The first season had 6 episodes, all of which were released on 24th November 2019 on BBC. Soon after, the series was renewed for a second season in February 2020. The filming for the same started in April that year. Due to the ongoing pandemic, the production was delayed and another set of six episodes was finally released on 15th August 2021. Joe Nunnery is the producer of both seasons with Terence Dunn providing the music.

It has been confirmed by BBC that the third season of Ladhood will soon start its production and filming. However, there is no news about what the exact Ladhood Season 3 release date is going to be. It is also confirmed that there will be six episodes in the upcoming season 3. Fans will still have to wait a little longer regarding any further updates.

Predictions say that Ladhood Season 3 release date will be in 2022. Even so, the date is still not announced. If there is a season 3 of Ladhood, the story is bound to pick up from where season 2 left off. The first two seasons were well received by the fans as well. The ratings of the show are quite good on IMDb and it can be expected that season 3 will also have a lot of surprises in store.

As mentioned, Ladhood is a coming-of-age series that deals with common day-to-day crises faced by an average adolescent. The story revolves around Liam Williams who questions his existence and personality when he comes face to face with behavioral and relationship problems. The series also shows the collective experiences of Liam and his friends in school. In short, Ladhood is all about Tom, Adnan, Ralph, and Liam navigating through their lives commenting on events that happen around them. The show follows two timelines, one in the past showing the life events of a young Liam and another following the present-day Liam.

The first season has a total of six episodes named as follows:

The second season also has a total of six episodes named as follows:

The ensemble cast of Ladhood season 1 and 2 include Liam Williams as Himself, Oscar Kennedy as Young Liam, Andrew Alexander as Tom, Lily Frazer as Jess, Samuel Bottomley as Ralph Roberts, Shaun Thomas as Tom Cragg, Abigail Thorn as Iona, and Aqib Khan as Adnan Masood. In Ladhood Season 3, the original ensemble cast will supposedly return back for their roles. Gareth Edwards and Chris Sussman are the executive producers of Ladhood while the cinematography is handled by Craig Dean Devine.