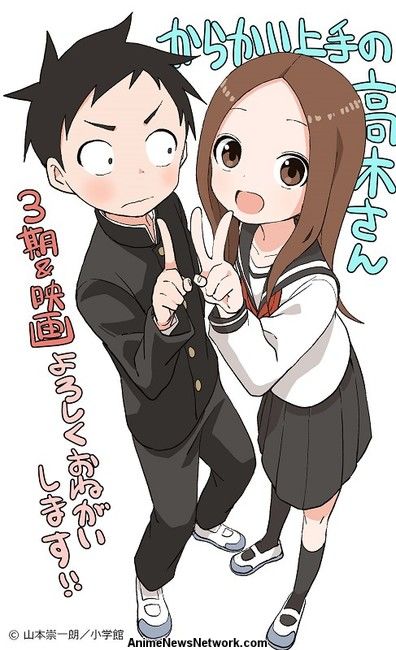 Teasing Master Takagi San is also a part of famous Anime series. The series is yet another Manga Series that is based on the high school life of the students. The series had 2 seasons previously which was aired between January to March 2018 and the second season aired between July to September 2019. The good news is that the series has claimed and made it official that season 3 will release and will air all over the world in all languages.

Teasing Master Takagi Sen Developers had recently launched the official teaser was released on 1st September 2021 on YouTube. Episode 1 for season 3 was released on 8th January 2022. And The series will release all the episodes weekly which will premiere as per different time zones. The next episode 2 will release on 14th January 2022 following the same the next Episode 3 will release on 22nd January 2022 at 9.55 pm as per Indian Standard time Zone. Not only this, the Trailer of season 3 crossed 5 Lakhs views and the fans Eagerly waiting for the new episodes.

Teasing Master Takagi San is written by Soichiro Yamamoto. In this Manga Series, he wrote about middle school friendships. The story revolved around two main characters Takagi and Nishikata both are classmates and sit next to each other in the class. While Takagi loves to prank Nishikata with her Embarrassing and serious jokes. The story revolves around the pranks and revenge between both of these mates. It shows the true color of the friendship when one fails to prank the other they both celebrate some of the times. The series also falls under the category of Romantic comedy as it’s the middle school life story of the town Tonosho.

Takagi San voice have been covered by Rie Takahashi. Rie was born on 27th February 1994. She is a famous Japanese voice-over actress. Rie is also famous for her singing as she is affiliated with 81 Produce. She always had a leading role in Anime series like Teasing Master Takagi San, Sieyu’s Life, Witchy PreCure. She also won numerous awards being the vice over actress and singer she earned the 10th Seiyu Awards as best female Newcomer.

Nishikata’s voice has been portrayed by Yuki Kaji. Yuki was born on 3rd September 1985. He is a famous Japanese voice-over actor. Yuki is also for his singing and he is also affiliated with VIMS. He is also famous for the voice acting in almost more than 100 anime series and he also provided his voice acting in many animated movies like La Corda d’Oro, Fist of the Blue Sky, and many more movies. He has been awarded as Best Voiceover actor for two consecutive years. For the 7th and 8th Seiyu awards. Yuki also started his web radio on his monologues and he earned his fame.

Teasing Master Takagi San who released only 2 seasons is releasing another season 3 on weekly basis. Yet the series is turned out to be a huge success for producers and directors. The series received 7.7stard out of 10 on both of the official websites of IMDB’s & MyAnimeList.net. Moreover, the score for the series is 7.72 and has ranked 1027 on the anime list. The Series had both positive and negative critics as it is very much emotional for some mid-school kids and might be boring for some high school kids. The vision was pretty much clear about the friendship and Bond between both these schoolmates who later became closest friends on the series. Yet there’s a long wait in the fans for season 3 episodes as it is releasing on weekly basis and the urge to watch all episodes together has increased.

ALSO READ: My Dress-Up Darling Episode 2: When Will It Release?