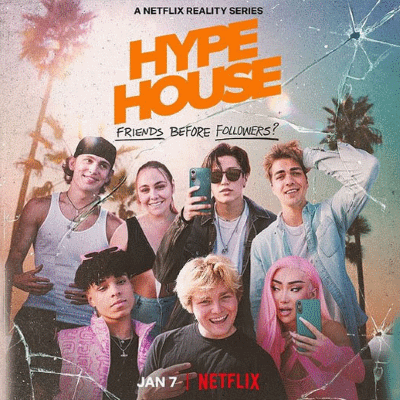 When Netflix announced that it’s working on a show like The Hype House, people gave a love-hate reaction. The show Hype House is based on a Spanish-style Mansion called “The Hype House. This huge mansion is where some of the TikTok content creators formerly lived. The group was assembled in December 2019 and the initial group included around 20 well-established TikTok Gen Z content creators. The house is perched at the top of a long driveway and has a large pool, a spacious kitchen, and a big drawing-room.

The funding of the Hype House mostly came from Chase Hudson, Daisy Keech, and Thomas Petrou. The initial purpose of the Hype House was for these content creators to live in the mansion and peacefully create their content together. They also perform different collaborations with each other time and again. However, only a handful of the founding influencers are now a part of the Hype House. During its peak time, there were at least twenty-one members in the Hype House. Later on, many of the creators left because of internal and external disputes.

Since the release of Season 1, this reality show has had all sorts of mixed reactions. Some users also have threatened Netflix that they will cancel their subscriptions because of the show’s release. Even the critics have not given a positive response regarding the show. On IMDb, the rating till now is a mere 2/10.

A reality series called The Hype House was announced to air on Netflix on 22nd April 2021. The show stars Chase Hudson, Thomas Petrou, Nikita Dragun, Alex Warren, Vinnie Hacker, Larray, Jack Wright, and Kouvr Annon. In December 2021, Netflix announced that there will be a total of 8 episodes of The Hype House, premiering on 7th January. The teaser was also released at the same time.

The show talks about the lives of these TikTok content creators who live in The Hype House. There are interviews and live video clips added to the show as well. The members of The Hype House talk about how they quickly rose to fame at the beginning of the series. They also talk about the pros and cons of their careers and how it is not as glamorous as it might seem.

Controversies In And Around The Hype House

In March 2020, when the founding member of The Hype House, Daisy Keech left the place, it sparked media attention. She stated that there have been some major internal disputes with the other members which are why she departed. Two months later, the D’Amelios’ sisters also left the collective because according to them, “The Hype House had started to become more like a business.”

Larry, who is an established TikTok personality and YouTuber, joined the collective in January 2020. But soon after he left as well, the reason still being unclear. In January 2021, Vinnie Hacker who is also an internet sensation joined The Hype House. It was a surprise to a lot of her fans and The Hype House’s fan base. In December of the same year, Russian model Renata Valliulina also joined the Hype House.

ALSO READ: Where Was I Love You Man Filmed? Know Here!