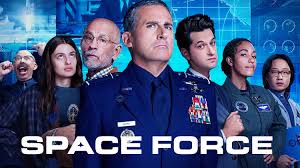 The moments that fans have been waiting for have finally arrived. The premiere date of Space Force Season 2 has been announced. The return of the series will also mark the return of Steve Carell and Greg Daniels. Season 2 of the fan-favorite series will release on 18 February exclusively on Netflix.

The series has been co-created by Greg Daniels and Steve Carell, who also stars in the series. The series revolves around the 4-star general Mark R. Naird, the character played by Carell is a respected pilot whose dreams are sky-high. Mark wishes to run the air force. The character finds himself in a loop when he is asked to lead the newly formed branch of the US Armed Forces which is numbered six. Mark is both skeptical and dedicated towards this newfound responsibility. Mark shifts his base with his family to Colorado. Mark and his team of scientists are assigned tasks by the White House. Space Force Season 2 will premiere on 18 February 2021 on Netflix.

The show is produced by Caroline James, Lauren Houseman, Michael Maccarone. Space Force is a sci-fi satire that will follow a team of officers who solve different cases while also dealing with their life problems. The plot is extremely intriguing and season 1 was positively received by audiences all along. Fans have been waiting for the new season and it is only a matter of time that they’ll get to watch the latest episodes.

The series will be divided into a total of 7 episodes. The series starts with General Naird and his team being put in a position where they need to prove themselves. All this while they’ll have to juggle with their personal lives. We follow the characters as we learn that even the Space Force is fallible. Season 2 will also mark some changes concerning the story. Brooklyn Nine-Nine fame Norm Hiscock has joined the team according to previous announcements. Hiscock will join Daniels as co-showrunner and move from Los Angeles to Vancouver.

The series delves into the tension between the two countries. US and China. The problems had gained momentum when the American satellite was sabotaged by the Chinese officials. The situation got out of hand when the Chinese disrespected the American flag by walking over it on the moon. The principal photography for the first season began on 1 October 2019 in Los Angeles, California. Some of the original shots were shot even in California State University, Dominguez Hills. The film met with mixed reviews from critics.