The present time has become one of the fruitful decades of entertainment and enjoyment. OTT platform also gives us the wings to see many special and unique series, web shows, and movies too. As the end of the year, December has come, many web shows and series are on the list of releasing. In this article, we are providing you with a list of some shows that are coming in December or have been released. So just stay tuned with us and enjoy!

The first show on our drama list is Inside Edge. It has become one of the top-rated series among others. Season 1 of the series was released on July 10, 2017, and Season 2 on December 6, 2019. The series is created by talented person Karan Anshuman who has also written the series with Saurav Dey and Ameta Sarda like big writers. The show is now coming back with its Season 3. Season 3 has released on December 3, 2021.

The series surrounds the Mumbai Mavericks which is a fictional T20 cricket team. The owners of the team operate spot-fixing on the matches. The series has an awesome star cast like Vivek Oberoi, Richa Chadda, Sayani Gupta, and Angad Bedi. People, who are lovers of cricket, must watch this series. It not only gives the cricket taste but some suspense with some action. Here is the link to the trailer of the series.

Aranyak is one of the crime, thriller, and mysterious web series. Directed by Vinay Waikul, it starred Raveena Tandon, Ashutosh Rana, Saurav Khurana, and Meghna Malik. Aranyak is the story of finding a foreign teenage tourist who is disappeared in the Himalayan town. Kasturi Dogra, the cop, gets on the mission to find the tourist with the help of Angad. The series will be available on the OTT platform from December 10, 2021. I must recommend this series to you to watch if you love the thriller and mystery genre. Here is the link to the trailer of the series.

The next series on our list is Aarya, which has received the Emmy International award. Directed by Ram Madhvani along with Vinod Rawat, it starred Sushmita Sen, Virti Vaghani and Chandrachur Singh ad many more super talented actors. Its first season was released on June 19, 2020. After the positive reviews from the fans, Aarya is back again with its Season 2. Season 2 is coming on December 10, 2021.

The series focuses on a lady named, Aarya, who joins a mafia gang to take revenge for her husband’s murder. The series focuses on her and her actions. We will tell you one more thing too, Aarya is a Hindi remake of a dutch drama series Penoza. If you live to watch crime and thrillers, then you should go for this series. Here is the link to the trailer of the series.

Directed by one of the renowned directors Manoj Pillai, the series is created and written by Ajay Monga. The series starred Sonali Kulkarni and Ritwik Bhowmik in the main leads with Ravi Kishan and Ashish Verma. The whistleblower is set to be released on December 16, 2021.

The story of the series is about a Vyapam scam in medical colleges that happened in 2013. It shows us the fraudulent scams of the medical college including big people like politicians, entrepreneurs, and many others. Ritwik is in the cast of Dr. Sanket, who is asked to do wrong things. It shows us the fake and bad reality behind medical institutions and colleges. You should give it a try. Here is the link to the trailer of the series.

Decoupled is just a bunch of comedy with romantic drama. The series starred Surveen Chawla, R. Madhavan, Atul Kumar, and Navneet Singh with many other talented actors. The series is written by Manu Joseph. The series is said to be released on December 17, 2021.

The story of the series is about a couple, who are willing to take divorce. They also have a daughter, whom they have to take care of. If you love comedy with some family drama, then this series will be best suited for you. Here is the link to the trailer of the series.

Asur is one of the biggest thriller series which was released on Voot. The series is created by Gaurav Shukla along with Shweta More and Vibhav Shikdar. The series cast includes Arshad Warsi, Barun Sobti, Anupriya Goenka, Ridhi Dogra, Sharib Hashmi, and Amey Wagh.

The series follows a brutal serial killer, whose case is being investigated by Nikhil Nair, a forensic expert, and a teacher along with his former mentor Dhananjay Rajpoot in the beautiful city of Varanasi. The investigation led them into suspense, mythology, and some thrill. Till now, the release date of Season 2 has not been officially announced, but the chances are that it will release in the December end. Let’s see what happens! Here is the link to the trailer of the series.

Let’s have a look at some movies too. Bob Biswas is number one on the list. The movie is directed by Diya Annapurna Ghosh and has a star cast of the legendary actor Abhishek Bachchan and Chitrangadha Singh. The movie is released on December 3, 2021.

The movie is a spin-off of the 2012 movie Kahaani, which starred Vidya Balan. The movie focuses on Bob Biswas, who was a character in the 2012 movie. After waking up from a coma after 8 years, he sees many unpredictable things and gets back on his work. If you have watched Kahaani, then this movie will be of your taste. Here is the link to the movie trailer.

Cobalt Blue is the next one which you can watch. It is of cringe and with a different taste. Directed by Sachin Kundalkar, the movie casts include Prateek Babbar, Neelay Mehendale, and Anjali Sivaraman. The movie is released on December 3, 2021.

When a brother and a sister fall in love with the same man, from then onwards, the problem and the drama start. This is just a unique concept, so I would highly recommend this to you. Here is the link to the movie trailer.

The next drama, romantic, and comedy movie is Atrangi Re which starred Akshay Kumar, Sara Ali Khan, and Dhanush in the lead roles. The movie is directed by Aanand L. Rai. The movie is set to be released on December 24, 2021, on Disney + Hotstar. The movie is also the Hindi remake of the Tamil movie, titled Galatta Kalyanam.

The plot of the movie is as simple as any Bollywood romantic movie. Maya Dubey ( Sara Ali Khan ) has to forcefully marry Deepak Kumar Dubey ( Dhanush ) and is not happy with her marriage. Then, her life changed when she encountered Samar Siddiqui. The love triangle just amazes the audience. Here is the link to the movie trailer.

Tadap is also the newcomer in the Bollywood movies list. Directed by Milan Lutharia, the movie starred Tara Sutariya and Ahan Shetty in the lead roles. This is the debut film of Ahan. The plot of the story surrounds a loving couple, where Ramisa Nautiyal ( Tara Sutariya ) cheated on Ishana Bisht ( Ahan Shetty ). The latter takes on revenge from her father and Ramisa too.

The film is released on December 3, 2021. So, if you have not watched the movie yet, then go and hurry up. Here is the link to the movie trailer.

83 is a biographical sports movie, which is based on Kapil Dev. Directed by Kabir Khan and under the production of Deepika Padukone, the movie casts include Ranveer Singh, Deepika Padukone, Pankaj Tripathi, Tahir Raj Bhasin with Jiiva, and many more super talented actors. As this is a biography-based movie, the plot revolves around the life history of Kapil Dev with his sports journey.

The movie is scheduled for release on December 24, 2021. Let’s binge on 24 to make our weekend great! Here is the link to the movie trailer. 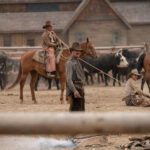