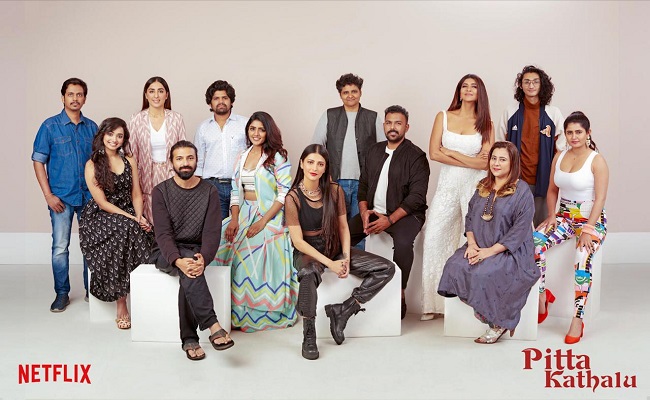 Wondering what are some Films Like Pitta Kathalu? Anthology films made a comeback during the pandemic. This genre of film not only keeps the audience engaged but also evokes a sense of using one’s own imagination. An anthology is a film sub-genre composed of several short films that are frequently associated together by a particular idea, thesis statement, or brief intertwined event. Each one is more often than not directed by a different director.

The film aired on Netflix on February 19, 2021. It is the first Telugu-original film produced by Netflix. From past relationships to jealousy to the darkest secrets, moviemakers have collaborated to explore varying shades of love in novel ways.

Four top directors, each with a unique story to tell, have collaborated to create four powerful short stories that analyze and discover the complexity of human relationships: love, desire, secret passions, and more. What’s even more intriguing is that all of the segments are primarily focused on women and revolve around the problems they encounter while traversing complicated relationships.

It consists of four stories, all directed by different directors: Ramula by Tharun Bhascker, Meera by B. V. Nandini Reddy, X Life by Nag Ashwin, and Pinky by Sankalp Reddy. Here’s the list of 8 Films Like Pitta Kathalu.

The film is a sleek sci-fi futuristic look at a world living in an alternate reality and stars Shruti Haasan as the lead. Nag Ashwin, the director of critically acclaimed films such as Yevade Subramanyam and Mahanati, is set to direct Amitabh Bachchan, Prabhas, and Deepika Padukone in his next multilingual blockbuster.

Sanjith Hegde, a well-known playback singer, makes his debut appearance in Xlife. This short story marvelously explores the theme of the gradual transformation of our society. People have somewhat disconnected themselves from the world around them in the period where ordering food is one click away. Nag Ashwin precisely explores: Who is in charge of us and why?

This short story demonstrates how we get stuck in others’ agendas and end up making our lives miserable. It’s a story about a girl named Ramula, played by Lakshmi Manchu and Saanve Megghana.

She falls in love with an MLA’s son but soon discovers that he has no intention of marrying her.

This segment is about the relationship between Merra, played by Amala Paul, and her abusive husband, Vishwa, played by Jagapati Babu.

It shows the rawness of marital problems and how a woman is left with no choice but to put up with the abusive behavior of her spouse.

Even after having two kids with her husband, she has an affair with another man, whose role is played by Ashwin Kakamanu. The storyline is interesting, but somehow the characters don’t create an impact.

Pinky is the anthology’s final story, as well as its least effective. The plot narrates the story of a married woman who is still desperately in love with her ex-boyfriend even after years of separation.

As both their respective complexities overlap with their secret affair, the sloppy layers of marital infidelity are rapidly sliced open. But he left some loose ends for the audience to interpret the story according to their own perspective, but it sadly didn’t work in the director’s favor.

Pitta Kathalu is a Tamil anthology film largely revolving around the issues that women deal with. But don’t worry, here are some recommendations for people who love to watch the horror and complexity of human relations.

This film is a chorus of inventive Indian directors who worked particularly with a collection of eerie, paranormal, and gothic stories. While each plot tells a different story from a different perspective, not all four stories add the perfect touch. They will entice you to look at your screens while leaving questions floating in your mind.

Lust Stories is a 2018 Indian Hindi-language anthology film directed by Anurag Kashyap, Zoya Akhtar, Dibakar Banerjee, and Karan Johar, consisting of four short film segments of three anthology films by Johar, Banerjee, Akhtar, and Kashyap, following Bombay Talkies in 2013 and Ghost Stories in 2020, both of which are on Netflix.

In Lust Stories, four very different directors explore four various shades of lust. However, the common ground in each is the theme of female desire and female pleasure as it attempts

In Lust Stories, four very different directors explore four various shades of lust. The common ground in each is the theme of female desire and female pleasure as it attempts to break free from the shackles of morality, ethics, patriarchy, hegemony, and class.

ALSO READ: MAYA AND THE THREE RELEASE DATE: HAS THE SHOW BEEN RENEWED?

Wes Anderson’s 2021 anthology film, The French Dispatch of the Liberty, Kansas Evening Sun, is based on a story he co-wrote with Roman Coppola, Hugo Guinness, and Jason Schwartzman.

Arthur Howitzer Jr who is the editor of the newspaper The French Dispatch passed away because of a heart attack. According to his wishes, the newspaper’s publication is immediately halted after one final farewell issue, in which three articles from previous editions of the paper are republished, along with an obituary.

V/H/S is a 2012 horror anthology film. Thanks to the sponsorship of Bloody Disgusting, a group of young directors were given the opportunity to create a horror film unlike any other. The plot of V/H/S revolves around a collection of old VHS tapes. This tape’s content varies, and each tells a different story directed by a different director or team of directors. The concept was so well received that it spawned two sequels: V/H/S 2 in 2013 and V/H/S: Viral in 2014.

The Ballad of Buster Scruggs

The Coen brothers wrote, directed, and produced The Ballad of Buster Scruggs, a 2018 American comic Western anthology film. It had a limited theatrical run and was primarily aimed at Netflix television.

Buster Scruggs is primarily populated by people who revel in violent mayhem in a largely unthinking, almost naive, and childlike manner. Killing, or acquiescence in the face of killing, is second nature even to the more polished characters, who tend to conceal the various atrocities with ornate declamations. A sizable proportion of the other characters are simply animalistic thugs. Meanwhile, witty, heavy-handed irony reigns supreme.

In a span of 2 hours and 30 minutes, the movie dwelled on vengeance, love, entitlement, and jealousy. Every story concludes with a shocking revelation, which is reason enough to watch this collection of films.

Each of the four stories has a very good storyline with a remarkable and stunning twist at the end of each one. All of the female leads delivered outstanding performances, but Konkona Sensharma, Nushrat Bharucha, and Shefali Shah stood out. Manab Kaul once again demonstrated his effectiveness, and he is unquestionably the best among all-male leads.