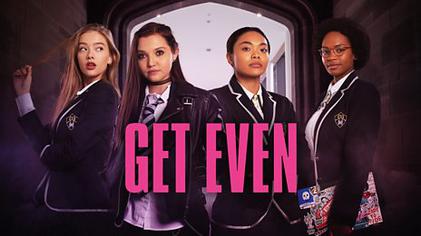 Get Even is a British series. The series revolves around the story of schoolgirls who form a group, DGM (Don’t Get Mad) to expose bullies at their school. The genre of the series is teen drama and thriller. It has only one season with ten episodes. The average duration of each episode is twenty to thirty minutes. It is released in the United Kingdom. It is written by Holly Phillips, Sameera Steward, Kate O’ ‘Connell Lauder, and Dan Berlinka and directed by Sarah Walker, Max Myers, and Andrew Gunn.

Get Even Season 2 Release Date

Season one is released on February 14, 2020, on BBCi player and on July 31, 2020, on Netflix internationally. It got 6.5 ratings out of 10 on IMDb. It is liked by approximately 79% of people. It is released in the original language of English. Now the audience is waiting for its next season. Till now, there is no announcement of its next season as it will first go through with the renewal. We can then expect its next season to be released the next year if they soon start their shooting. So yes, it’s quite a long bit long but we have to wait.

Get Even Season 2 Story Plot

The story starts with Kitty who wants to be the team captain of the football game but she couldn’t and lies to her parents because of their high expectations. At a house party, she discovers that Ronny takes Mika’s phone and posts her photo in which she is in underwear clothes. She gets incensed by this and makes a group, DGM (Don’t Get Mad) to expose him. She makes a plan with Margot, Olivia, and Bree and while exposing him he got murdered by someone and she found a note near his body saying DGM is in his hand. Kitty soon finalizes that their group is being framed for Ronny’s murder so they all start investigating the death case.

They soon find many clues and pieces of evidence. They found PE teacher, Coach Creed’s sexual chats with Camilla. They exposed him and he got arrested. They soon find that Mika is also murdered. Kitty feels guilty over it and decides to leave the group. Olivia suspects Margot that she stoles her diary and takes a day off from school. The police also investigate the case and find many clues and pieces of evidence. They soon find that there is a similar note in Christopher’s locker that they found near Ronny’s dead body. Logan commits that he is a DGM and DGM girls group asked her to admit the murder of Ronny and Mika. In doing so, they record his tape and showed it to everyone in front of the school. He gets arrested and DGM starts a new mission.

Get Even Season 2 Story Prediction

Most probably the next season will show the background of four characters and DGM deeply. Loga also admits to Margot in the first season that his family is related to a secret society called the DGM and they work for them. Well till then, we can see the trailer and enjoy it.

Get Even Season 2 Cast