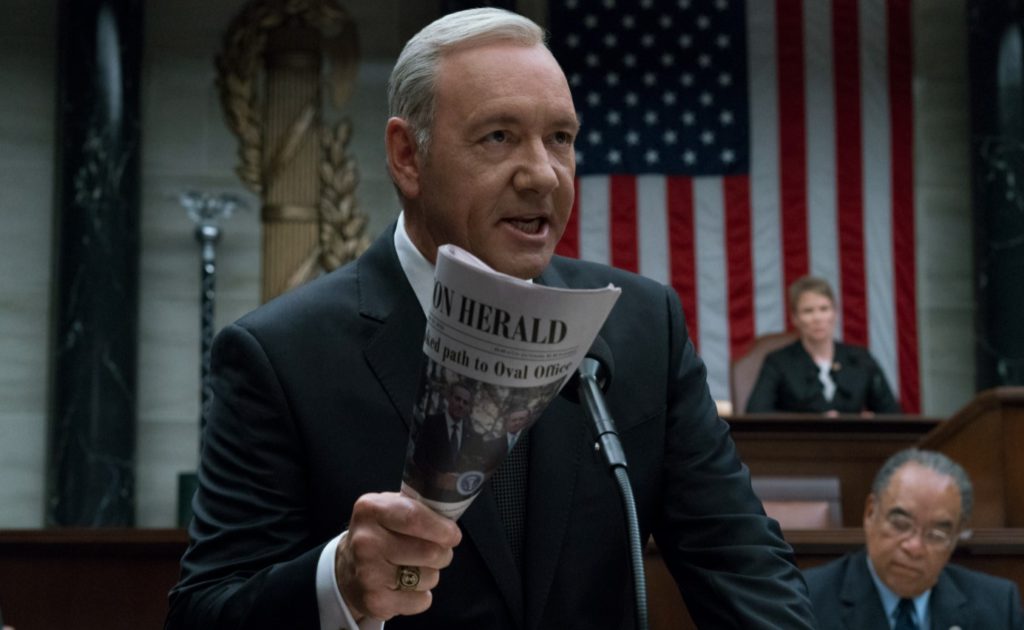 Politics interests a lot of people, they are keen to know how some people influence a country and run it, people get fascinated by making of a common person to a leader. There are various shows that deals with the subject of political drama but the one show that has made a mark for itself in this genre is House of cards which is an American political thriller series which is created by Beau Willimon, the show is an adaptation of the 1990 BBC show of the same name, which was further based upon the 1989 novel House of cards by Michael Dobbs.

House of Cards has received positive reviews and responses from fans and critics over its various aspects, such as its writing and realistic portrayals of the American political system. Show ran for 6 seasons with 73 episodes in total, with an average runtime of 40 – 60 minutes per episode. This was the first series produced by a studio for streaming on Netflix.

The project was first announced in March 2011, where it was decided that Kevin Spacey would star and act as the executive producer of the show, director David Fincher was set to direct the first two episodes and Netflix ordered 26 episodes of the show that would run for 2 seasons. The show finally got released on 1st February 2013 with 13 episodes in its first season, House of cards is widely regarded as the show that was one of the few which started the streaming and OTT culture in the world.

The second season got its premiere on 14th February 2014, and the third season on 27th February 2015. The fourth season was released on 4th March 2016 whereas the fifth season on 30th May 2017, the final season of the series landed in trouble after various allegations against Kevin Spacey after which Netflix ended contracts with him and the sixth and final season was released on 2nd November 2018 without Spacey’s involvement. It was made clear that the show has officially ended with the sixth season and it would not return with another season ahead but there were few rumors and reports to make spin-off shows on its different characters.

The story starts when a new president of the United States is elected, where we get to meet Francis Underwood who is our main protagonist, and his wife Clarie who decides not to follow orders of the new president, Francis uses a reporter to cover a story that results in creating a lot of tensions in the White House, Francis must rush to deal with a crisis in his home state whereas journalist Zoe sees a rise in her career and is not able to manage the fame she has received after the White House story.

The further story follows different aspects of Francis Underwood’s career as he is trying to reach the heights of success in the American political spectrum. Furthermore, he tries to run for the president himself where he must face various big guns and come across a lot of personalities, he also makes and breaks relations where he finds friendship in few and makes a few individuals enemies but no one can be trusted as this is a powerful game.