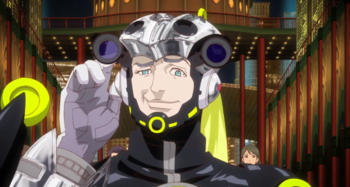 Both superheroes and anime are hot cakes for today’s entertainment world. So when there is a show that is a mix of both, there is no doubt about the show’s immense popularity. The same happened when the superhero comedy anime Tiger and Bunny came out. It instantly became a favorite for anime lovers.

After the first season, the viewers were waiting eagerly for the show to get renewed but unfortunately, no such news was coming out from the makers. But thanks to all the collective wishes of the audience, finally the show has been renewed for a Season 2 which will be releasing soon.

Though the makers confirmed the renewal of the show the exact date of the release is not yet confirmed. But most likely it is going to be in the year 2022 and the viewers can only keep their fingers crossed for it to be early in the year.

There will be some iconic actors who will be playing their original roles once again. Hiroaki Hirata will voice over for Kotetsu and Masakazu Morita for Barnaby. The two heroes of the show will have their original voices in this season too.

Like the previous season, this season will also feature the clash between the two long-time partners, Kotetsu and Barnaby. They will constantly fight against each other throughout the season. Kotetsu will give intense strength without any rules while Barnaby will use intelligence and strategy.
There will also be actors like  Minako Kotobuki as Karina Lyle, a.k.a. Blue Rose, a superhero who can create and manipulate ice (cryokinesis), Nobuhiko Okamoto as shapeshifter Ivan Karelin, a.k.a. Origami Cyclone, Taiten Kusunoki as Antonio Lopez, a.k.a. Rock Bison, Kotetsu’s best friend who has the power of impenetrable skin, and more.

Other heroes like Dragon Kid, a young hero who can manipulate lightning, Sky High, a very popular hero whose power is to control the wind, and the Fire Emblem will also appear voiced by the original actors.

Though nothing is confirmed yet the viewers can expect a different story with all the original characters in the same universe. As per reports Kotetsu and Barnaby might fight on the same side instead of with each other. This sequence is greatly exciting for the audience who cannot wait to see what will happen when these two superheroes will be united.

Season 2 will have the stories of each character in a more elaborate manner and we can expect some more villains to fight with our protagonists. The series is not based on manga series like most animes but rather has a sci-fi plotline. This gives the makers an advantage of creativity and the fans have to wait for the season to be launched to know more about it.