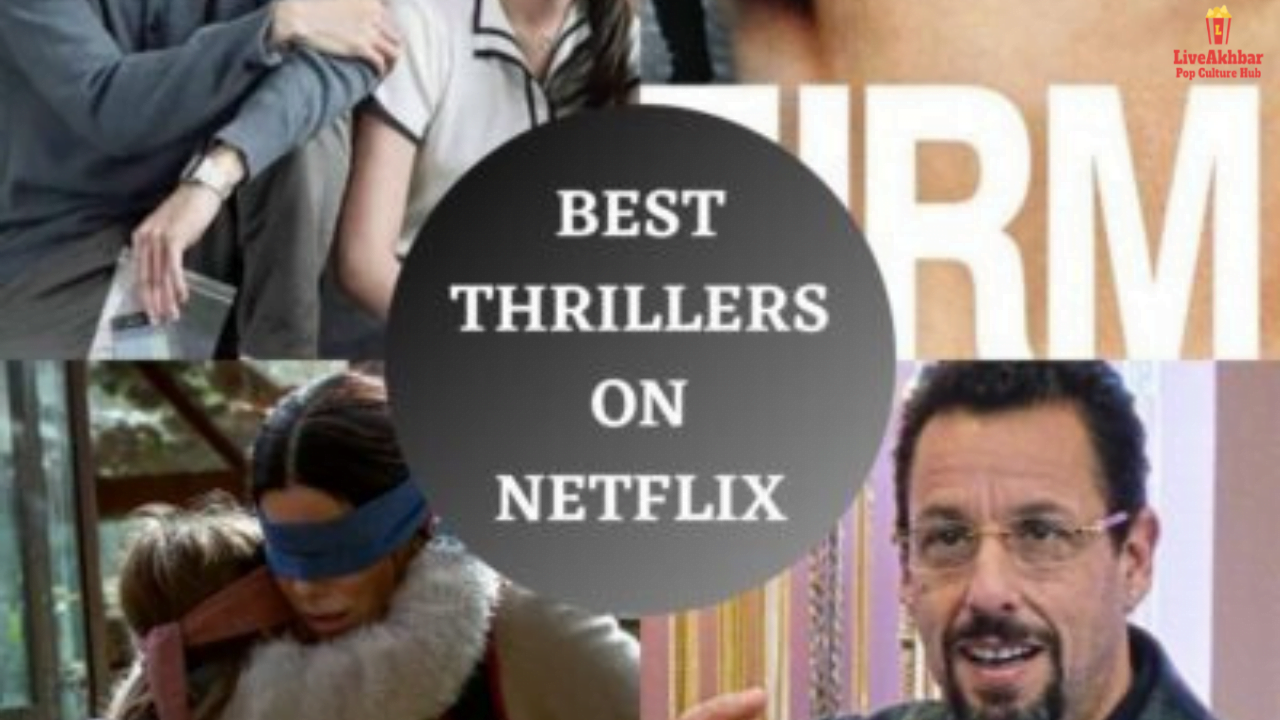 Sitting at home, safely popped in your couch, and a screen in front of you and you are all set to watch a thriller movie. What could be more thrilling and exciting than this? Watching a thriller is something which makes your blood to pump, and your palms also cause sweat. This is what the beauty is of watching thrillers on Netflix. You will witness the action, drama, comedy, crime, and many more on this platform. Netflix offers a massive library of thriller movies at your fingertips, but it’s essential to note best of them so that you could feel the absolute thrill. So browse our list of best thrillers on Netflix, which has somewhat the thrill’s fair shares to keep you engaged.

It is about an assassin who begins to doubt her own choice to enter the world when the job goes awry. Ava, directed by Tate Taylor, is a thriller film starring Jessica Chastain. It is more complicated when you are killing people even though you have a family than it reads on paper.

In 2014 it made its way to Netflix, and this was vastly underappreciated noir-thriller in which Jake Gyllenhaal was playing the role of a small-time criminal. He works for an LA TV station while filming crime scenes and some of the gruesome accidents. Dan Gilroy’s Nightcrawler is known for weaving a twisted tale of ethical journalism as well as consumeris

For generations, no movie franchise has entertained the audience consistently other than James Bond. People not only enjoy but feel the real thrill too. Surely, Quantum of Solace might not be considered as the best film of the Craig era, but it is quite sure that it will keep the audience entertained all the way. And if you find that it is not enough, then Tomorrow Never Dies and GoldenEye is available and currently streaming on the Netflix screen.

Sometimes for the people, the terrifying thrillers are those for which they feel that they could legitimately happen. However, it is only when you are always seeking the thrill of big and risky bets. Adam Sandler is in the lead role in Uncut Gems, and his character is named Howard Ratner. In the movie, he is in the role of a jeweller who makes a big bet. According to it, either he can put his life on the line or reset him financially.

It is a Korean-language film which will definitely seem innocent to you only front end. Still, the moment when a writer goes to the airport to pick up his friend from high school, everything in the scene begins to change when he noticed her with another man who had a really strange side project he likes to do: burning greenhouses. Of course, the film has received critical acclaim and is appreciated, and therefore we shouldn’t ruin it by elaborating anymore.

It sounds thrilling when we hear shipwrecked and that also on an island. Isn’t it? Being shipwrecked on a deserted island and then to struggle for finding the way for the survival! Seems somewhat thrilling and exciting too, Sweetheart is a film based on this theme which is about the desperate attempt of a woman for her survival. It comes up with a bonus: Just one hour and 22 minutes and you are done with the story.

There are chances that you might have slept on this film. Spike Lee is the producer of the film. But, now it is available on Netflix. In 2019, See You Yesterday showed itself on the platform of Netflix. This movie revolves around two science prodigies who are working on an experiment related to time travel. Their experiment becomes even more important than the last time when one of their brothers got murdered by an officer.

On 1st May 2020 this film was released on Netflix. It has suspense, thrill, and action. What else we need? As the title itself suggests that the story is about the suspenseful deaths. The plot revolves around the mysterious death of 6 unmarried women and all of them were pregnant. The main cast has stunning Manoj Bajpayee as Joy, gorgeous Jacqueline Fernandez as Sona, and handsome Mohit Raina as Imran Shahid. The story ends leading to the way of an another part. However at last we get to know about the real culprit.

The Killing Of The Sacred Deer

Yorgos Lanthimos is an acclaimed director who won the award for the best screenplay at Cannes for this super exceptional psychological thriller starring Nicole Kidman and Colin Farrell. They are a married couple in this film, and their family starts to fall apart after inviting an orphaned boy to their house.

In this movie, there is a group of highly gifted students who set up a college entrance exams scam which afterwards leads to higher and higher stakes when they become more and more successful. This is a Thai heist film that came in 2017 and had a hundred per cent on Rotten Tomatoes as well as it is critically acclaimed.

Sometimes movie places itself and the trailer’s geometry when it is about the moments when the world suffers from a terrifying disease, and it becomes difficult for the survival of lives. Sounds familiar? 93 days is an African film which is based on the 2014 Ebola outbreak in Nigeria and showed how it arrived in the country when someone comes from Lagos with that disease. Moreover, this thriller movie is completely based on real-life events and the steps taken by the Nigerian government that ultimately saved countless lives. These steps were a strong response to this fatal disease.

This Netflix psychological thriller is all about a family who goes on a road trip for Thanksgiving. But accidentally his young daughter suffers an injury and then Ray takes his wife and her to the nearest emergency room and keeps waiting as the two were to be taken for CT scan. However, both of them disappear, and so Ray becomes curious about what the hospital is hiding.

I am the Pretty Thing that Lives in the House

Ruth Wilson plays the character of Lily, who is a live-in nurse. She moved into a mansion situated in remote New England and was owned by the patient. The patient was a horror novelist who is suffering from dementia. Very soon, Lily starts questioning about the unsettling things that were taking place in that house which tend to come straight from one of the books of her patient.

Nightcrawler director Dan Gilroy creates this horace satire, a mix of Eyes of Laura Mars and The Square. This movie is starring Jake Gyllenhaal, who plays the role of an art critic. He discovers some of the mysterious paintings that had supernatural abilities which were painted by an unknown artist. It can also take revenge on anyone who makes an attempt to profit themselves with these paintings.

Have you ever spent an evening at the dinner party from where you could not wait to escape? If it is so, you will definitely appreciate the escalating tensions of this thriller film that deals with creepy cults, old friends and probably an offer that no one can refuse. Do you know what keeps ‘The Invitation’ interesting till the end? A witty screenplay as well as a strong cast.

The ’90s were the golden era of movie-star-packed legal thrillers, and if you missed Sidney Pollack’s The Firm, then you cannot even imagine that era. This has everything in small proportions likes sneering mobsters, tax paperwork and Garey Busey. But apart from all these, there is one reason for which you should definitely watch this movie, and that is the weirdness of Tom Cruise. He performs backflip in this movie.

Directed by Mike Falanagan, Gerald’s Game can be marked as one of the best Stephen King adaptations. It can also be placed under the top 10 in the same category. However, it’s a story of a woman who is husband suddenly dies because of a heart attack, but she is handcuffed to the bed, and so she finds a way to survive.

This movie follows a farmer to Nebraska, where he sets on the path for writing a confession for a murderer from his past. It is adapted from Stephen King novella. Starring Thomas Jane, Molly Parker and Neil McDonough, this film is directed by Zak Hilditch. It was on 20 October 2017, when it appeared on Netflix. This plot has a real thrill, and you must binge-watch it.

Before the creation of Uncut Gems by Safdie brothers could be done and before Robert Pattinson might start the new Batman, the three of them collaborated and appeared in a Good Time. Pattinson was into the character of a bank robber and street hustler who was trying desperately to make his brother, played by Benny Safdie out of the prison after the job goes wrong.

Sarah Paulson, Sandra Bullock, John Malkovich and Trevante Rhodes can be seen in this dystopian thriller. ‘Bird Box’ is a Netflix original film. It is about women who travel with their children. But the twist is she has to travel blindfolded. As the movie goes on, many sources create obstacles in the journey.

This list of best thrillers on Netflix will help you to sort out the best one for yourself. All the movies listed above are exciting and appreciable at their places. Hence, you may find some of them the most thrilling while some with a comparatively pale thrilling experience.

ALSO READ: Best Hindi Thriller Movies You Must Add To Your Wishlist!