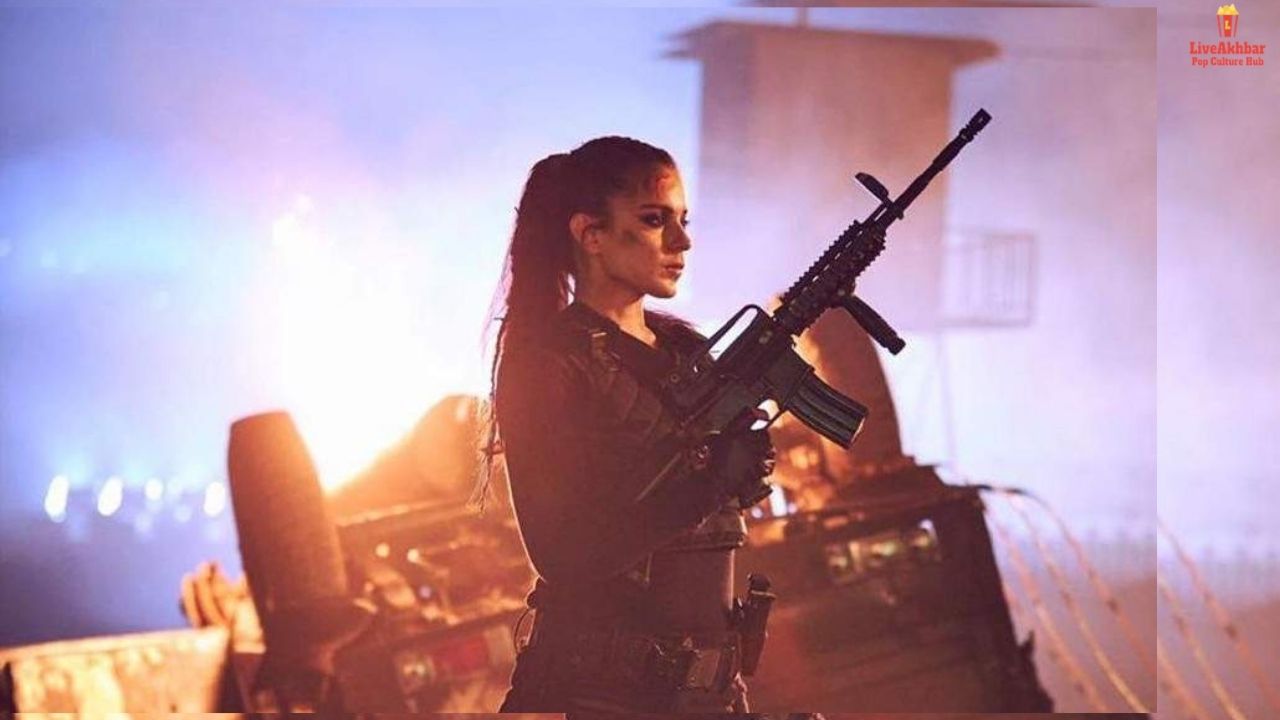 Dhaakad is an upcoming action thriller Indian Movie starring Kangana Ranaut along with Arjun Rampal, Sharib Hashmi, Divya Dutta, Neeraj Pardeep Purohit, Ankit Pachori in leading roles. Directed by Razneesh Ghai and produced by Zaid Ali, Amit J. Chaudhary, Sohail Maklai along Deepak Mukut. The screenplay of the movie is written by Chintan Gandhi along with Rajneesh Ghai. In the movie, Kangana Ranaut is featuring Agent Agni from the name of the character we can expect that agent Agni is Fierce Who is in action mode and ready to end the evils of society. Dhaakad Release Date Could be announced anytime soon.

The first look of the Dhaakad is out in which we can catch the glimpse of Kangana Ranaut’s look and get the lead who exciting the movie is going to be. Kangana through her Twitter account that tells that she had to multitask between the shoot for Thalaivi and her upcoming film Dhaakad. She furthermore used her Twitter handle to disclose the poster and release date of the movie. Dhaakad is all set to appear on the big screen on 1st October 2021. Fans of Kangana Ranaut are eagerly waiting for the movie on the big screen. Kangana share her excitement for the upcoming Dhaakad in the style of Agent Agni ” She is fearless and Fierce” Dhaakad is going to be India’s first female leading Action Thriller movie.

This year Kangana Ranaut is giving back to back blockbusters hits. Moreover ‘Dhaakad’, Kangana will also be watched in ‘Thalaivi’, a biopic on actor-turned well-known politician Jayalalithaa. ‘Dhaakad’, touted to be a world-class spy action thriller movie, is being authorised by Razneesh Razy Ghai.

MUST READ – Upcoming Movies Of Kangana Ranaut, Here’s The List!

Dhaakad Cast, Who’s In It?

As the cast of the movie mentioned before it comprises Kangana Ranaut as agent Agni in the lead role. The movie is also featuring Sharib Hashmi, Arjun Rampal along with Divya Dutta, Neeraj Pardeep Purohit, Ankit pachori in supporting roles.

Kangana Ranaut is an Indian actress, model as well as Film Maker. She has received the film fare award as well as National Film Awards. She has been featured six times in the list of Forbes India Celebrity 100. Kangana Ranaut is also awarded India’s fourth-highest award “Padma Shri” in the year 2020.

Sharib Hashmi is an Indiana Actor well recognised for his leading role in Filmistaan and Jab Tak Hai Jaan. He recently featured in Amazon Prime’s Web show The Family Man as JK in a supporting role. Recently he is working in a web show named Asur streaming on voot selected

Arjun Rampal is a television personality who appears in the movie. Arjun Rampal is a model as well as a filmmaker. He has received Filmfare Award and National Film Award for Best Supporting Actor for his best performance in Rock on. He has been featured in movies like
Dil Hai Tumhaara, Om Shanti Om, Kahaani 2: Durga Rani Singh, Nail Polish, and many more.

Divya Dutta Is an Indiana Model and actress she is working in the industry for a long time. She has been featured in Punjabi, Malayalam as well as in English movies. She starred in Bollywood hit Bhaag Milkha Bhaag and many more.

Neeraj Pardeep Purohit is also an Indian writer as well as actor, recognized for Om – The Battle Within released in 2021 and going to feature in Dhaakad.

Ankit Pachauri is also an Indian actor, well known for Durgamati: The Myth released in 2021 and Mauka-E-Vardaat released in 2021. He is going to hit the box office with the upcoming Dhaakad (2021).

The leading artist of Dhaakad Kangana announced the release date of the movie along with the makers. Dhaakad is all set to hit the theatres and box office on 1st October 2021. Wait for Dhaakad is stated when the announcement of the movie made by the makers of the film. When the release date announced audience looks very exciting and showed their excitement through their there comments. The first look of the movie is out with a small teaser but that’s not enough audience can’t wait to watch the movie.

Dhaakad Story Details, What to Expect?

The story of Dhaakad will follow Agent Agni who is in the way of killing the evils of society. As if now it’s difficult to expect that what will happen. Kangana Ranaut shares that the viewers will get to watch a blood bath in the movie. In the poster, Kangana is carrying a bloodied sword in her hand. Agent Agni is read to cut into the bad guys who will stand in her way. Filming has wrapped up and all set to release on 1st October 2021.

Kangana Said – “Dhaakad is not going to simply a benchmark movie for her career but will be a twisting point for Indian cinema as well. The movie is ascended on a large scale, and is one of a female-led action thriller movie.”

When Will get Dhaakad Trailer?